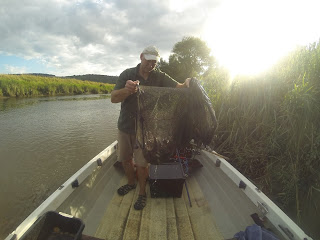 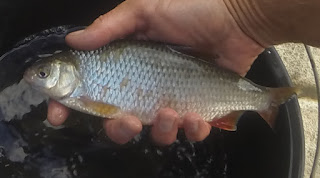 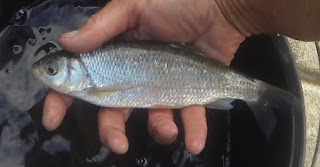 Popular opinion among the British coarse angling public is that our rivers 'ain't what they used to be'. I often hear people moaning about the lack of , what they call 'silver fish' and the general decline of the fishing on moving water, often blaming the perceived situation on the 'black death' (cormorants), otters, and even European immigrants.
In the 1960s and 70s before the advent of 'commercial' still water venues , coarse anglers made a bit of an effort for their fishing. They would walk further than fifty yards from where they parked their car, if indeed they had a car . They would take the time to master skilful techniques such as trotting the stream using a centre pin reel, and develop a knowledge of how to read a water to find the best swims.
Indigenous species such as roach and dace were cherished although it has to be said, pike were badly mistreated and misunderstood by many.
River angling was far more popular than it is today and indeed my local river, The Arun, regularly saw coach loads of  Londoners visit every week-end during the season often to fish large competitions.
Nowadays most matches are fished on man-made, murky mud puddles where artificially reared carp compete with each other to jump on a pellet baited hook. Its all so easy this 'quick fix' angling, so much so that it would appear that the vast majority of anglers just can't be bothered with the rivers any more.
Of course , these 'commercials' do have their place in the angling world and allow elderly or disabled anglers to pursue their passion or even those with little time on their hands to get their 'fix'.
I often wonder why, when they are so little used, clubs still rent river fishing for their members. One club official acquaintance of mine, a river fan, says that he rarely sees another angler on the bank all season, yet the still waters are packed. However, from a personal of view, that's not a bad thing at all. It just means I can fish in peace and quiet, and have the whole river, or at least as far as I can see, to myself.
This afternoon, following up a tip from a river mooring neighbour, I took the small boat a short distance to 'The summer house' swim and took full advantage of the ebb tide which tends to fish well. The recent rain had 'freshened' the river somewhat, and it had 'fined' down to a very 'healthy' level of colour. Combined with partial cloud cover, and a 'mild' temperature, I couldn't have wished for better coarse fishing conditions.
Armed with just a pint of maggots , and a bag of brown crumb, I nestled the boat against the thick bank side vegetation, anchoring it in exposed mud in an attempt to keep it steady enough in the strong upstream wind to fish a feeder /quiver tip outfit. It worked a treat.
Almost all of the river is inaccessible from the bank along this stretch so being afloat, is a tremendous advantage
Once the fish had homed in on the ground bait, which took just a few casts, it was a (very delicate)bite a chuck and , apart from a handful of 'tiddlers' every fish was of a decent stamp.
Roach to about 12oz and some lovely dace to 9oz (I think the biggest I have ever caught) steadily took my single red maggot on a size 18, with a solo perch and the odd tiny chub for variety.
By the end of the session I'd amassed about ten pounds of fish in my keep net ( I haven't used one of those for years) and thoroughly enjoyed the fishing, and some interesting wildlife including a barn owl out for an early afternoon 'hunt'.
O.K they weren't exactly monsters but, a river match angler, or indeed an 'old school' coarse pleasure angler would have been pleased with such a haul and I wasn't disappointed.
What is far more important however Is the indication that the roach and dace population in the river is healthy, and this situation has further implications regarding our favourite freshwater predator-the pike.