Mullet was to be the target again today and Dave joined me in our small boat for another run down stream. The winds continue to blow curtailing any inshore boat fishing ,and did indeed hamper us somewhat . This made  anchoring, and keeping the boat steady a little difficult at times.
We started the day running against the flooding tide making the journey much longer but arrived at the mud flats in time for high water and some feeder fishing. The mark soon produced a mullet to my flake bait- a better stamp of fish than Monday's  at 4-07.
As the ebb set in we moved out into the main river and broke out the float rods. I was experimenting with a small modified multiplier(Abu 4601) instead of a centre pin having read an old 'Angling ' article, extolling the virtues of the reel, written  by Dave Steuart in the early 70's.
The tiny multiplier worked well to a point but, still being fitted  with its anti reverse mechanism, it didn't allow the same sort of control over a running mullet that a 'pin' has. Also, being mounted on top of the rod the line kept sticking to the  blank which, due to incessant rain, remained wet all day.
I'll probably revert back to a centre pin reel for this work but, it was worth a try.
A second mullet of about 3lb fell to my rod as we trotted the flows on the 'lower flats' and after relocating to 'carp straight' and fishing a few spots, a third smaller fish also took a liking to my bait.
A difficult day in difficult conditions and I was actually quite pleased that we'd managed to find the three mullet.
As the ebb ceased, we headed home following the tide all the way up to the mooring- a very pleasant run indeed earmarking several swims for future experimentation along the way. 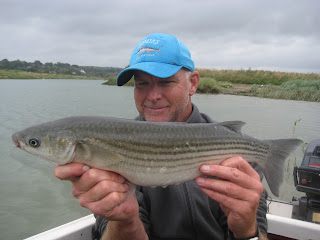 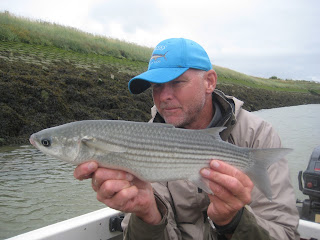 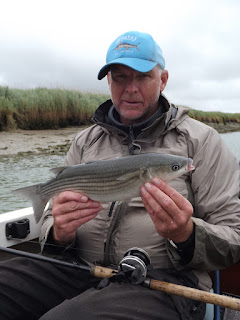