I've recently received an email from blog reader Paul Morgan asking about the handling and stability of my boat as he's thinking of purchasing one himself. Thanks for that Paul-it's nice to know someone is reading all this.
I find it very difficult to be objective when asked questions such as this as ,having made my choice and spent a considerable amount of cash naturally, I love my boat.
I'm not really qualified, officially,, to comment and my experience is limited to perhaps a dozen or so boats of a similar size that i've either previously owned myself, which amounts to the grand total of one,or boats belonging to friends that i've ridden in. I also rely heavily on the opinions of other boat owners who have ridden in my boat , particularly if they've owned a few boats themselves.
All i can say is that, in my opinion, the 'export' feels extremely safe and stable. When you consider some of the larger species of fish that Ive hauled over her gunwales, and some of the large 'specimens', sometimes two of them, that i've had fishing with me on board, I think I can safely say that she's not a 'tippy' boat.
As far as her sea going ability is concerned, perhaps the above picture, taken today, might give you a clue to how she handles a 'sea'. After all, i'm alive and writing this aren't I!!!
Paul, if you decide to buy that 'Export', and it does look like something of a bargain, I don't think you'll be disappointed.
Today's fishing was something of a lightning affair. I'd just finished a night shift and with single figure wind speeds (knots) forecast for this morning, I was determined to get out with just a lure rod again especially as I've missed so many opportunities over the past few days due to work. However, the down side was that there was a 'blow' due in sometime around midday.
With a flat sea at half past nine I literally 'ripped' it out to the chosen mark and, with a little help from a friend, was on the fish immediately. Seven bass in the two to four pound range, a wrasse and a big fat pout later, the tide had dropped off, the wind had kicked up, and it was time to head home. I'd been out for a little over two hours!!
Killer plastic was a 'swat' shad which has served me well recently. Even in a wind assisted two knot drift, I can keep the 50g model pretty much directly beneath the boat and its streamlined design means it gets straight down there fast. The latest design from 'Redgill', the 'evo stik' was also tested with a 60g nose weight and although it did drift down tide somewhat on the drop, still caught fish.
I'm really enjoying this 'lure fishing only' lark and lets hope that there are enough slots in the weather to get a few more trips out before the water temperature drops enough for the bass to disappear.
Posted by Unknown at 11:14 No comments: 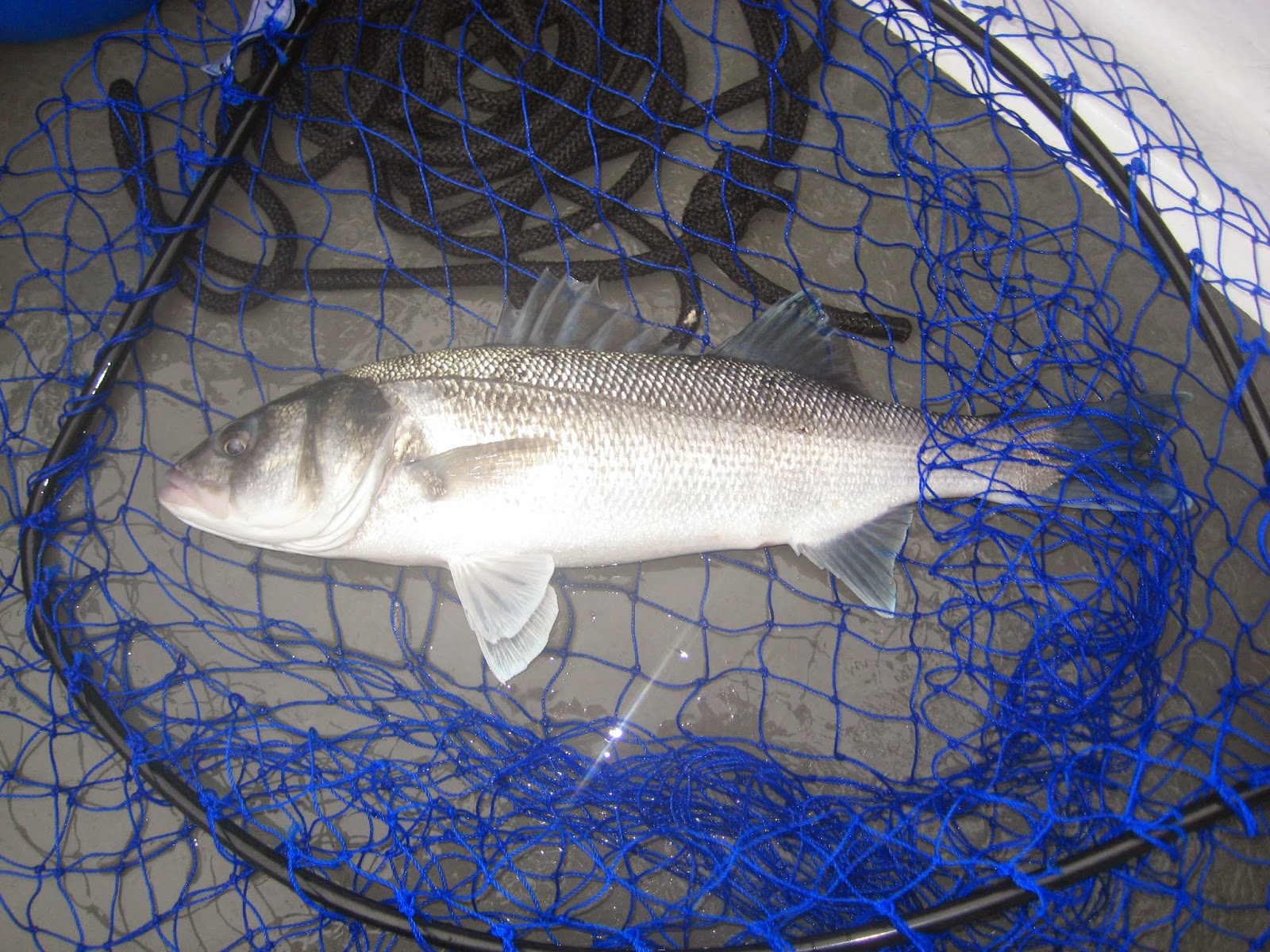 In truth, this entry covers six trips during late November but ,only four are of any consequence.
I do very little beach fishing  . Not that i don't enjoy the odd outing on the shingle , its just that owning your own fishing boat spoils you somewhat in that the fishing can be quite spectacular although, at times, i do question whether boat fishing is any easier than shore. Let's just say that more opportunities for success exist when afloat if indeed, you can actually get afloat.
Despite my kitchen door being a mere hundred yards or so from the high tide mark,the only shore fishing i do nowadays with any regularity, is autumn surf fishing for bass. Recent south westerlies has meant the surf during the early part of the month was excellent but, for various reasons , I failed to be able to take advantage and get out. Unfortunately i missed the boat somewhat as some very good bass were taken from beaches local to me with some excellent results from a mark that I was first made aware of nearly twenty years ago. In those days it was a far more popular spot  and not just when the sea was 'active' either. In calm conditions, I would often see lure and fly anglers chasing 'silver' mostly in low light conditions at dawn and dusk.
Nowadays it is rarely fished apart from a few hardy 'surfers' -mostly known personally to me. They score some very nice bass but put in some extreme effort in the form of rod hours so deserve everything that comes their way.
Although the surf wasn't 'up' , one evening i fancied a bit of a 'sesh' on the shingle, so hit the beach outside my back door. The weed was a pain,(when is it not!) and the fishing not particularly exciting (i caught half a dozen whiting) but, i enjoyed myself nonetheless and it was fun watching the rod tips rattle even if i couldn't really tell whether or not i'd hooked anything until i 'd retrieved the rig!
If the surf does kick up again before the water temperatures plummet, I'll be ready for it.
A boat session with baits in search of cod at a mark some nine miles off produced two lost 'greenbacks' (bugger) and a whole heap of dogfish. I guess it was just one of those days and it occurred to me that the water was sufficiently clear to be thinking about chucking plastic around. 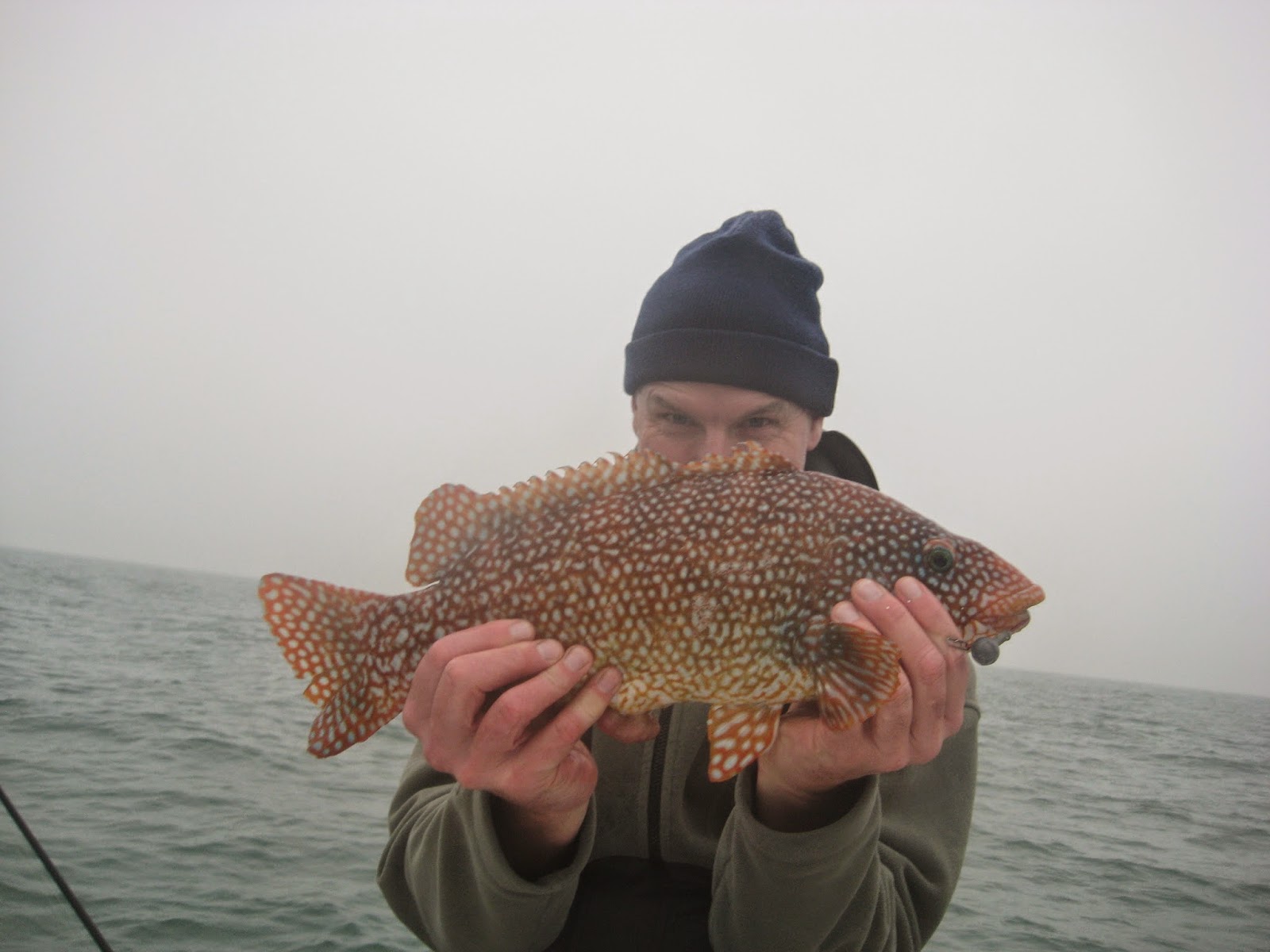 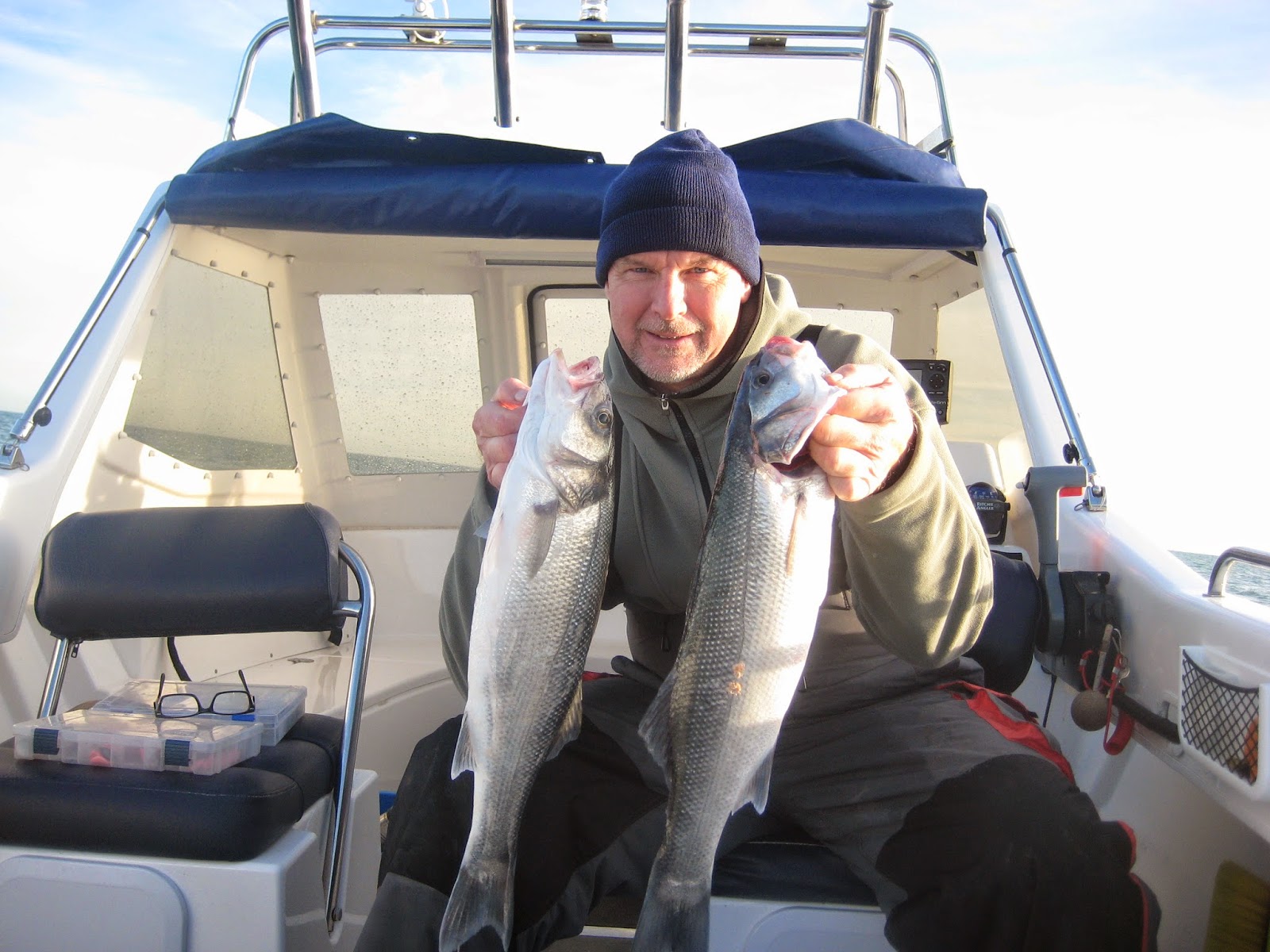 a brace of fours for the pot. 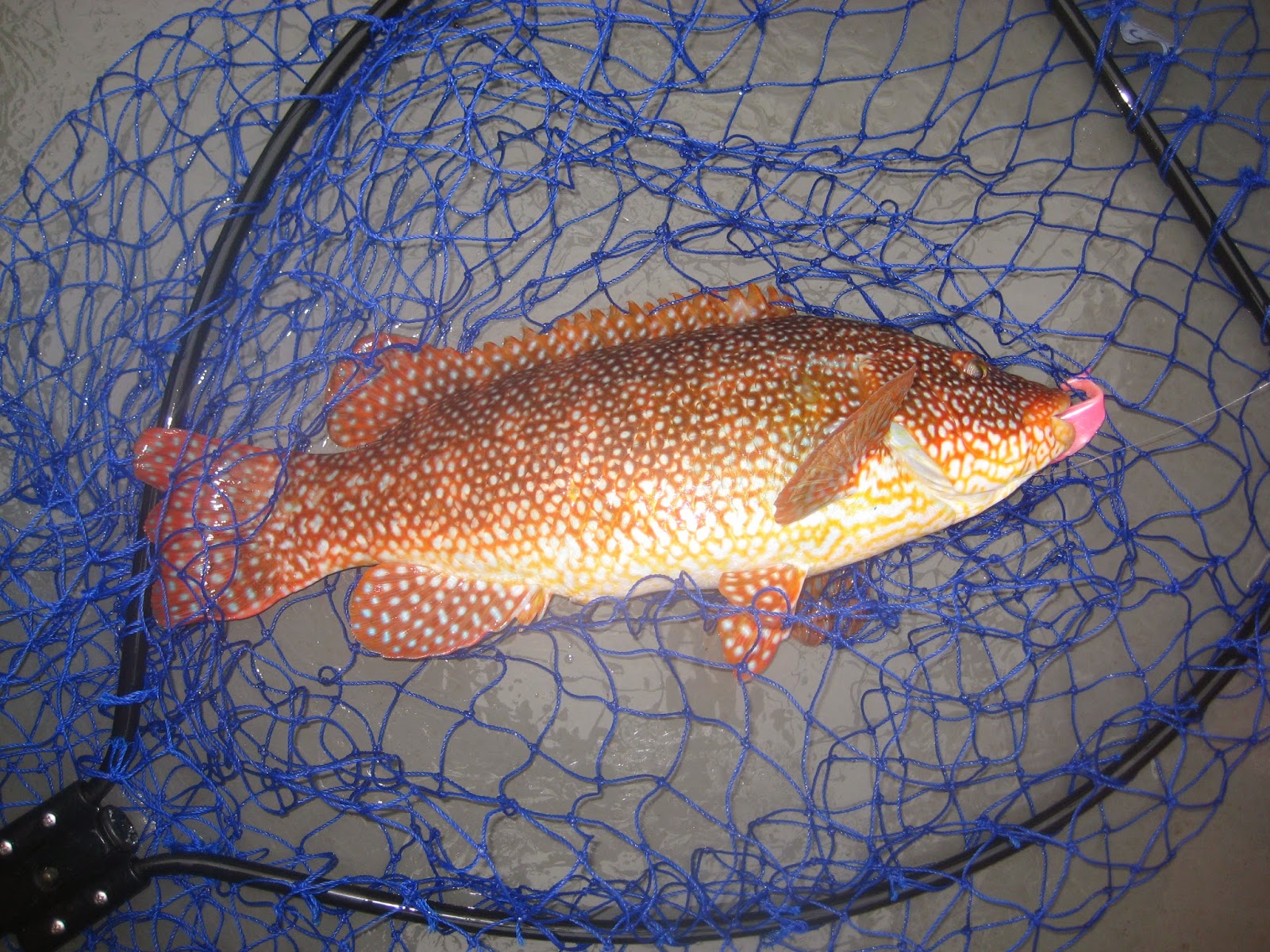 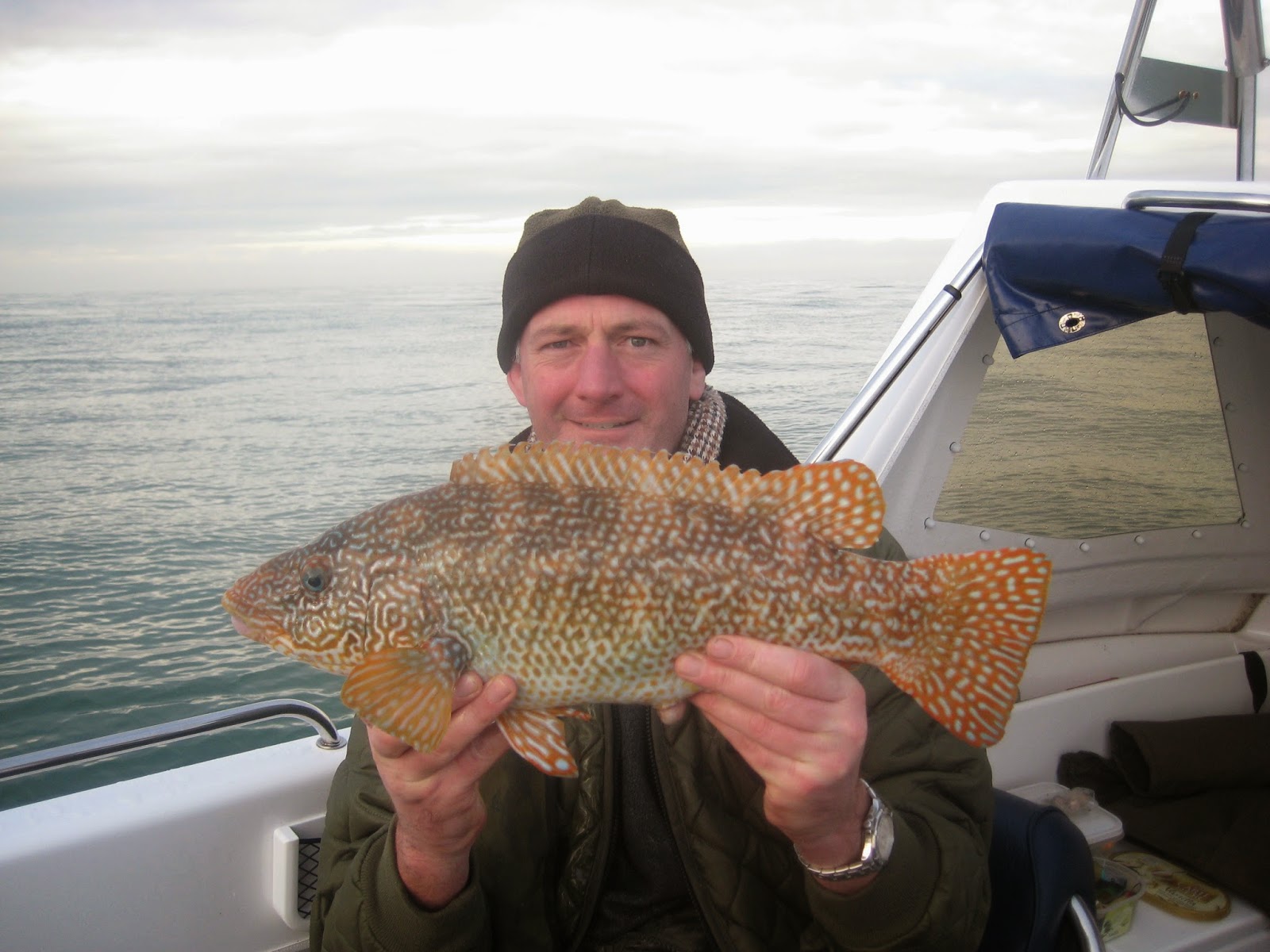 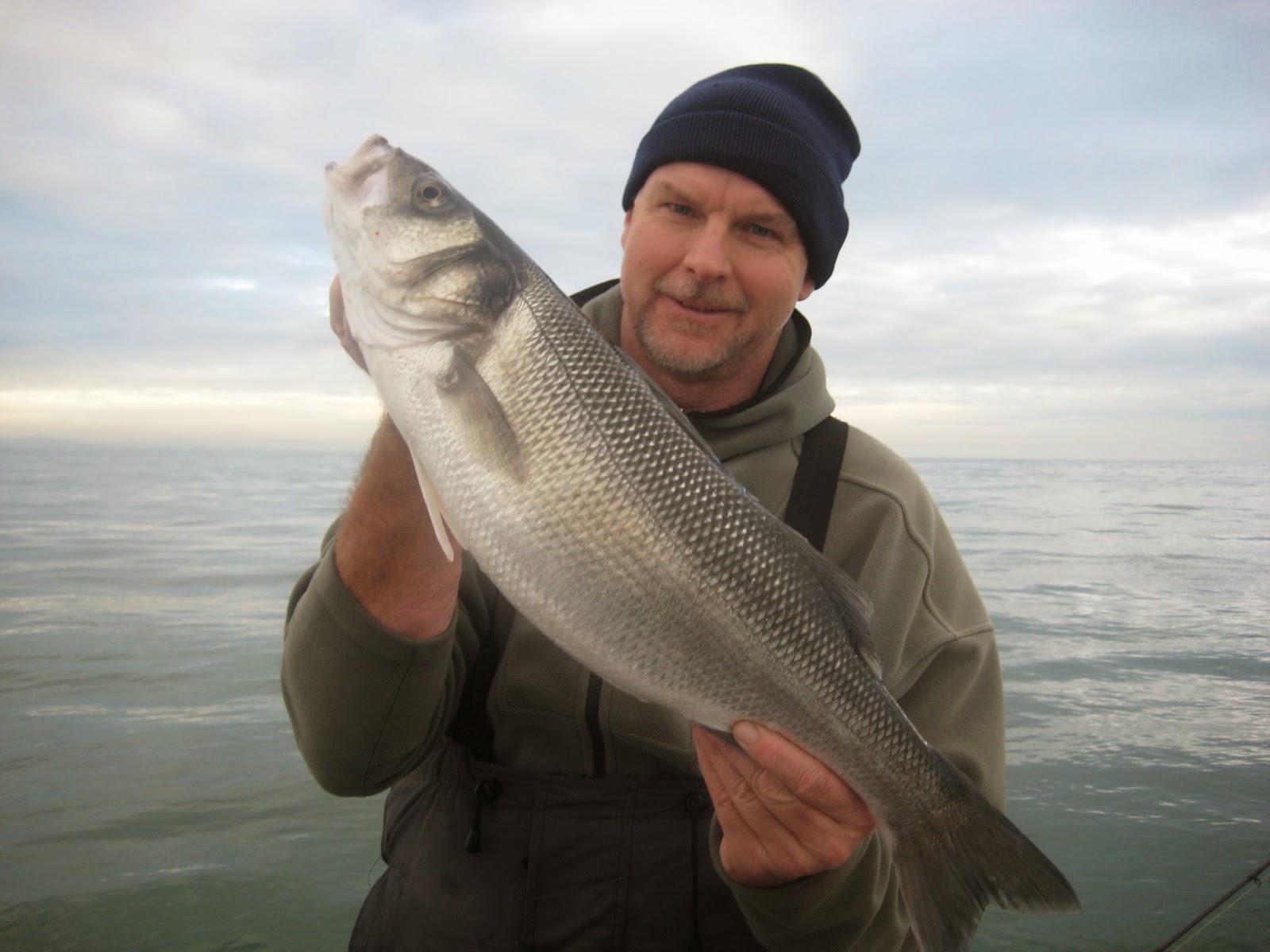