Two days general coarse fishing aboard the 'new' boat with Dave. We elected to fish swims upstream of our mooring and even selected a spot to do a bit of pre baiting on the first day.
Using trotting and feeder methods , most of the fish we caught were fairly small roach, bream , chub and dace with the odd half decent fish thrown in to the mix.
We rarely see anyone else fishing the river but, it was surprising that so few people were out considering that the season was so young, and the weather quite kind.
Just two fellow enthusiasts were spotted. A bank angler who is known to me anyway, and also a fellow boat owner from the moorings who , according to Dave,is quite a celebrity in carp angling circles.
I'd never even heard of him (ahem) but then I must confess that I don't really keep up to date with what's going on in the angling world generally.
Fishing was slightly hampered by large quantities of debris that seem to be everywhere in 'our' stretch at the moment. Hopefully in time, it will disappear but, for the time being, it's going back and forth with the tide and generally being a nuisance .
One thing we did learn was that its quite possible to successfully leger from the boat and, seeing as we're often fishing some pretty deep swims, this could be a major advantage. However, relying on the usual 'bank' methods of bite indication, when afloat, can prove problematical. The solution is to virtually touch leger , it sometimes being necessary to hold the rod all of the time.
Hopefully, we'll get a chance to fish for the 'bigger' species at some time such as carp and, dare I say it, a barbel (I know Dave would dearly love to get one). In these instances , sensitive bite detection may not be such an issue but only time will tell.
In the meantime, we're just enjoying some peaceful fishing in beautiful surroundings. Dave pointed out a red kite to me today -a very impressive sight indeed. 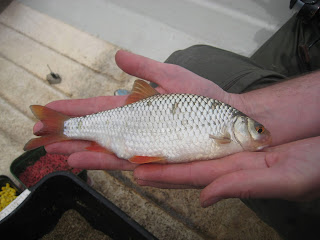 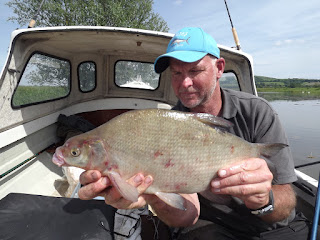 An ugly bream
Posted by Unknown at 08:24