In my last pike fishing entry I mentioned that we were experiencing some heavy rainfall and that It would possibly affect the water condition of the river.
Its generally thought, that coloured water and good pike fishing do not go well together however, exactly eight years ago today I caught my personal best pike-a fish of 26lb 6oz from a very murky, post flood, river and that event, as well as several similar captures, have often given Dave and me the confidence to fish in less than 'ideal' conditions.
The tidal stretch of a river is rarely that clear anyway simply due to the fact that the flow changes direction at least twice a day keeping particles in suspension for longer and regularly disturbing silt deposits .
Pike need to feed at some time regardless of their environment. Granted , If the river is carrying large quantities of rainwater, and is the colour of strong tea then finding a meal might be more difficult but I suspect that  pike adapt to challenging conditions,and hone their variety of senses in order to survive.
One variable that we both agree does affect our success is air temperature. We've found that 'our' pike become less active in very cold conditions, especially a sudden drop in air temperature, and to tempt them might require the services of a live bait.
Conversely, on a mild day, as we have proved time and again, a static dead bait will often be enough to Induce a take and these are our favourite conditions, probably because they require less effort. Securing live baits can be a difficult, and time consuming process.
Usually we will fish a dead bait in a swim for no more than an hour before moving on- a time span that we feel is enough for a pike to be tempted to take, If indeed they are present.
Live baits , on the other hand, can at times, not always, trigger an instant reaction.
Of course all of this is highly speculative, and we can never be really sure of what's going on underneath the surface.....thank goodness.
Because we are now both semi-retired , we can, to a certain extent, be a bit more choosy when we decide to go fishing often selecting 'kind' tides, and favourable weather.
We've been studying the river levels carefully over the past few days and Indeed yesterday, we visited the boat to see first hand, what conditions were like. The river was still carrying quite a bit of water and, was still murky, but not excessively so.
Both agreeing that it was worth a shot, especially as air temperatures were forecast to hover around high single figures, we decided today, to head back to the area of my last two captures to see if any pike were still about.
In short, they were, and my half bluey bait was soon taken at the first port of call by yet another 'nine pounder'.
An hour or so later and, after a short hop upstream, It was Dave's turn, again using a bluey as bait, to battle this very fine 19lb 3oz fish. 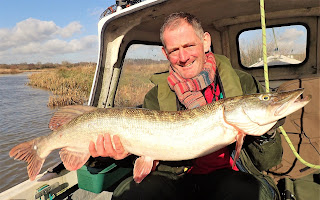 Now then, the reader could be forgiven for thinking that this is the same pike as my '19' from last week, especially as the points of capture are merely yards apart however, having studied the photographs carefully, I can confirm that they are two different fish.
Obviously this is encouraging news as, It would appear, that we might possibly have found a concentration of pike. However, likely as not, we could turn up in exactly the same spot a few days hence  and the area could be completely devoid of pike activity, and remain so for the rest of the season, such is the transient nature of our river's fish.
One of our coarse fishing mates-Paul Holden, had told us of some 'nuisance' pike invading his roach swim a few weeks back so we selected this spot as our next stop off. I had a dropped run on a dead roach in the swim but the fish failed to return for another try so we headed off again, moving downstream.
At the next swim , another regularly visited spot,I'd positioned one of my baits just a yard or so from the bank side vegetation, although still in 10 feet of water and it was this bait, again a roach, that was taken next.
Initially the fight was rather lacklustre, the fish swimming with the flow towards the boat deceiving me into thinking it was small but, as it came closer, it shifted up a gear, and used its bulk.
Dave netted a fine pike of 18lb 5oz for me before it could reach the rear anchor rope and proceeded to take the splendid image below- the man's talent with the camera is apparent in this image. 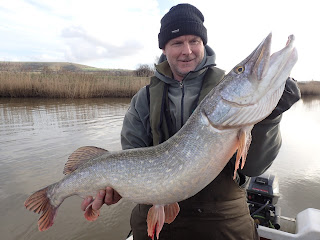 We continued to fish with no more action until the light started to fade but by then, the temperature had dropped significantly and anyway, we'd had our day.All In all, quite a successful one.
Posted by Unknown at 07:13 No comments:

Intermingled with this months 'pikefest' was a sea trip-only the second time I've used the boat all month.
Brian joined me and, with a small tide, we decided to try to locate some cod in the deep gully marks where we fish for tope in the spring and summer.
In short, that didn't work and the only interest in our baits was from dogfish so an alternative plan was hatched.
At slack tide we headed to a  bank that also has a small wreck in the vicinity. Initially we dropped some lures over the wreck but all that produced was a succession of pouting so as the tide settled in to the flood, we anchored the bank and sent down big squid baits in the hope of catching some blonde ray.
At first the going was slow but once the tide picked up, so did the bites and a succession of upper double figure blondes hit our baits providing some excellent sport in the fast flow.
The sea was calm enough for us to safely stay out until sunset and, what a sunset it was.
As usual, back at the marina, we were the last ones to head for home. 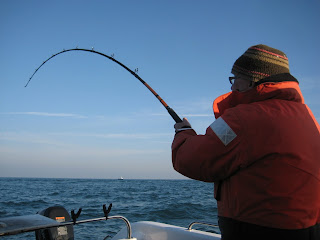 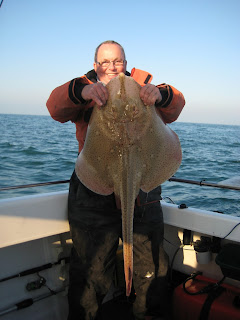 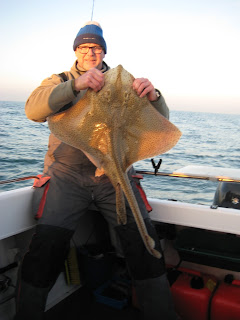 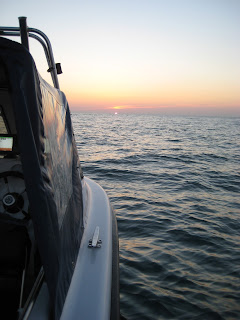