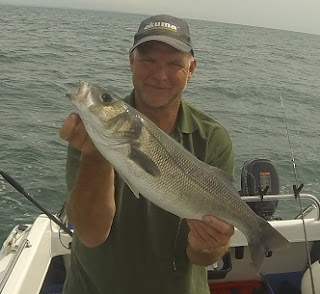 A 4-30a.m start at the boat secured enough 'light wind ' time to fish  until it all kicked off about lunch time. I spent the ebb on the drift at mark 49 before heading in and finding mackerel in good numbers on #2 over slack many of which found their way into the bait tank. The early flood was fished  at #6 at anchor and wasn't too bad with wind and tide on my bow but it soon built up enough to drag out my grapnel. I finished with a brief few drifts at 'Charlie's' which produced a trio of small bass but in all seriousness, it was getting far too bumpy for comfort so I was back on the mooring by 2-00p.m.
Nineteen  bass were taken on lures and bait of various sizes but no 'lunkers.'This one took a 'livie' at anchor....something I rarely do nowadays. 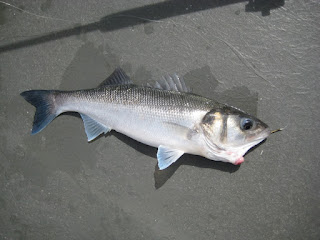 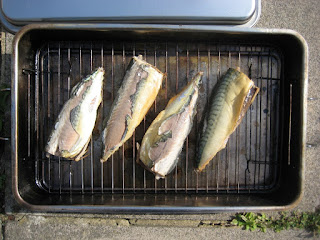 Finally they've arrived and I can get 'smokin' again....delicious. Had about twenty in a very short space of time and the sea seemed alive with them- a great sight indeed. 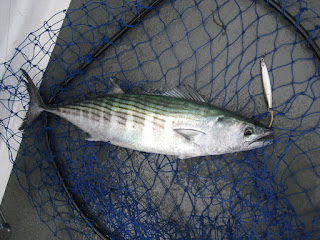 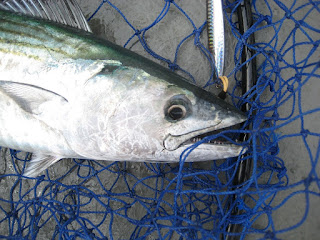 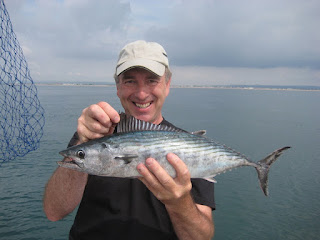 Ashort inshore bass lure session (Charlie's) with Alex joining me on 'Jupiter' and what must surely be the most unusual fish to ever grace it's decks- An Atlantic Bonito.
Quite what it was doing up here off Littlehampton is anyone's guess but, I've been informed that water temperatures are unseasonably high and the sea is teeming with bait fish at the moment.
As well as the 'nito' we tempted twenty odd bass to about three pounds, but they were tricky to snag on our 'huge' 120mm Fiish minnows . It was obvious that they were pre occupied and something smaller in the lure department would have been far more appropriate- a fly fishing outfit would have been very useful on this occasion especially as so much feeding activity took place on the surface.
Posted by Unknown at 13:54 No comments: 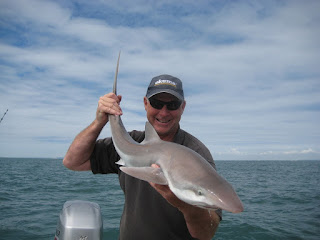 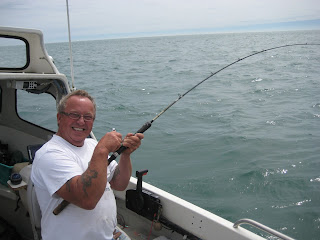 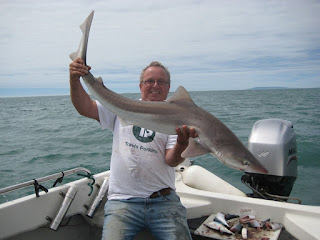 Brian's tope which was  a new p.b. 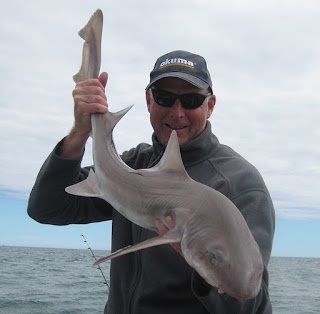 Woof!
A trip out with marina buddy Brian in his trusty old Orkney-definitely the smartest, most organised boat on the moorings.(sic)
Brian wanted to show me a hound mark but we were distracted initially by the prospect of a few tope at Mark 41.
Sport wasn't hectic (when has it been on the tope front this year) but we did pick up a few up to perhaps 30lb and when the tide started to run a switch to uptide tactics made the fishing far more pleasant -the usual pound plus leads being switched for 8oz grippers.
Eventually we hit the target mark and within minutes, I had a hard scrapping hound on(a good lower double), followed shortly after by one for my mate.
I love hounds-proper sporting fish especially from a boat on light gear. I can't help but think if our shore angling friends scaled down to something like a bass rod, they'd have far more fun with these fish.
Posted by Unknown at 13:46 No comments: 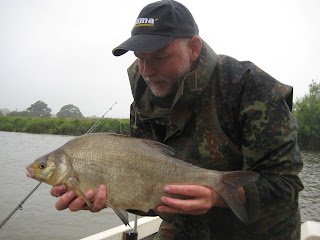 A series of trips to the river with bream to over 7lbs, along with pound plus roach. My best solo outing so far has been fourteen bream for a total weight of 68lb 6oz in a session where I didn't start fishing until 4p.m when the tide had turned to ebb. Copious rafts of debris made the flooding tide completely impossible to fish. 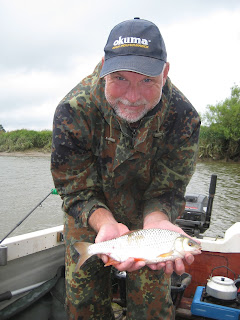 Pound plus roach were a very welcome surprise and, on this particular day, Dave and me had three between us with Dave accidentally dropping his best over the side before weighing.  We guessed it was about a pound and twelve ounces- the largest roach either of us have ever seen in the river. It was certainly bigger than the two we weighed that day at 1lb 5oz, and 1lb 7oz.Bait was small boilie or single fake sweet corn but still fished on the method feeder bolt rig. 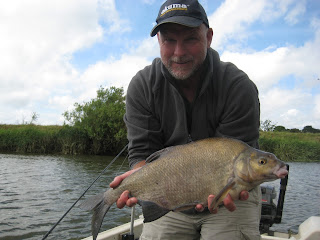 Seven pounds plus and in fine condition. Most of the bream we're catching are in pretty good shape but occasionally, a really beaten up specimen appears. We've even had some with  serious wounds . Pike or cormorant attack perhaps, although the 'black death' are a rare sight on the river. 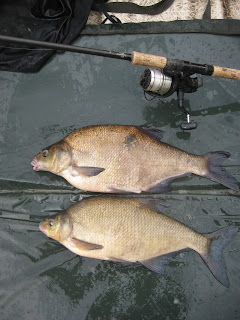 Two at once. As I was unhooking one fish, the other bait runner went 'Garrity' giving me the chance to get this double shot. Both fish were over 5lb. 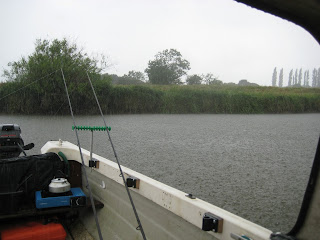 One day it pelted down filling the boat up very quickly but the bream continued to feed-one just seconds after this picture was taken. I managed to play it in (yes these river bream scrap to a certain degree) whilst still sitting under the cuddy. 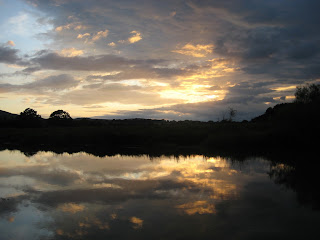 A river sunset on a late evening session . 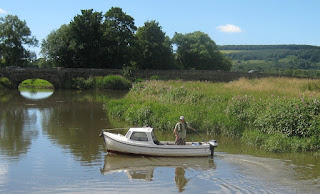 Dave at the helm. Our scruffy old Orkney really is a very attractive little craft. 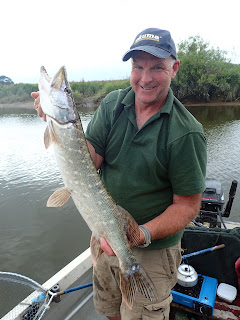 An errant pike
that took a shine to a retrieved sweet corn hook bait. We'd suspected he/she might be in the swim as there had been some odd fry activity and also, on an earlier trip, when I put down my underwater camera, a pike briefly showed up in the murky water.
Our quest for an elusive carp or barbel from the swim continues although we may change our pre baiting tactics in an attempt to avoid the bream. Somehow, I think that's going to be a big ask and we'll need a stroke of luck, and some serious rod hours to achieve our goal. 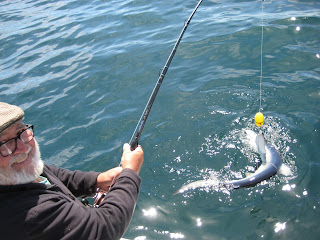 My good mate and marina neighbour Alan asked me several months ago if he could join me on a shark fishing trip sometime this season. Actually finding some days when the winds haven't been blowing has been very difficult so when I spotted a window in the weather, I jumped at the opportunity and asked him to tag along.
Initially there were two consecutive days of light winds but unfortunately, as often happens, we only managed to get out on one day before the numbers increased.
Penzance was, once again the chosen location and having arrived after an early start, but very easy run down from Sussex, we pitched our tents at the camp site, and checked out the harbour facilities for the following morning.
More by luck than judgement the tides proved to be convenient for an early morning launch, and evening recovery, as the harbour dries completely at low water. Conditions were near perfect as was the drift speed and direction so my confidence was high but, as the day wore on, and the shark failed to appear, I became quietly concerned.
Finally when the Penn connected to the far set float screamed like a mad thing I felt a great sense of relief and, as was pre arranged, it was to be Al's fish.
The shark, a good six foot 'plusser', fought very well indeed which pleased me no end, and my crew mate commented that it was the best battle he'd had with any fish, ever. As usual the circle hook connected cleanly and was easily released but not before I'd secured a few shots to capture the moment.
Unfortunately that was to be the only take of a particularly slow day so I didn't get a 'go ' myself but that doesn't matter as the satisfaction of getting a mate a shark goes much further than catching one myself.
To cap off an enjoyable day afloat, a large pod of common dolphin made an appearance on the run home swimming right underneath the boat and giving us a spectacular view of these stunning creatures.
The following day, the wind had increased too much for comfort so we decided to head for home having just had the one day afloat.
The whole trip was made much easier due to a new acquisition to my 'fleet'. The rather 'long in the tooth' Isuzu Trooper in the pictures, recently purchased from my son Jack, towed the boat effortlessly and made life on the slipway completely stress free. It's only drawback, is that it's not a campervan, hence the use of tents however, it performed so well that it's here to stay and  my trusty old VW van can finally breathe a sigh of relief. 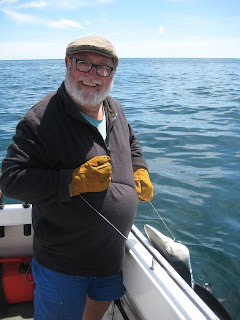 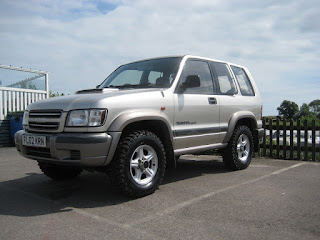 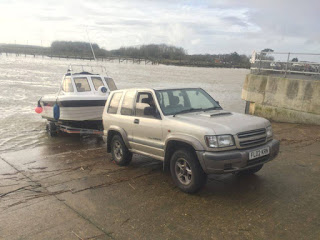 'The Tug' doing what it does best. 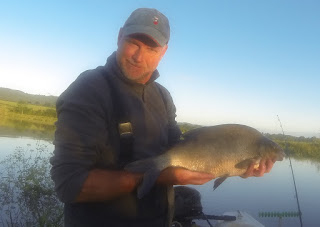 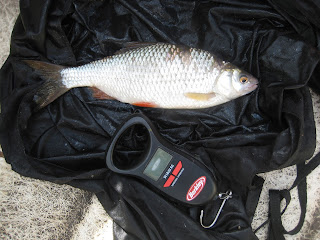 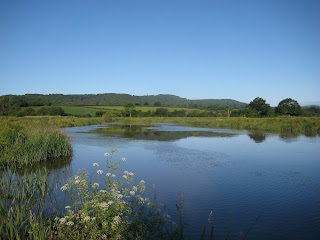 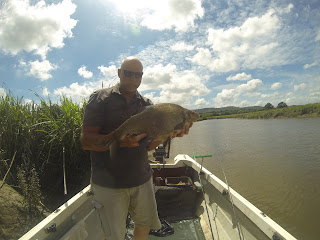 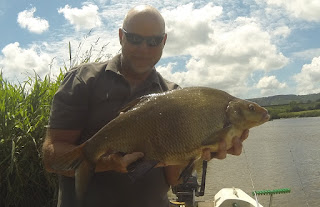 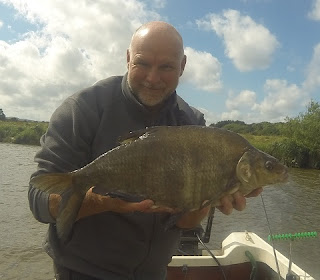 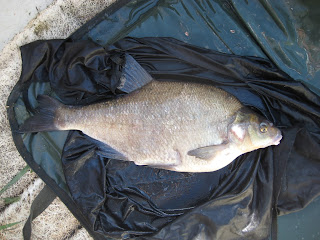 Three consecutive sessions fishing the baited swim  and, once again, the sport proved to be very consistent, although bream are not specifically what I'm hoping for.
The 24th was an all night foray, which is something I rarely undertake these days, but served to remind me of the fun I had when night fishing in my youth, and was thoroughly enjoyable. In those days tiredness didn't really affect me and I wish that were still true today,as It's certainly the best time to be out fishing.
The river seemed to come alive in the small hours, and I caught bream of 4-14,5-07,6-02,6-04 and 6-05 on a mixture of pellet, boilie and corn baits whilst,scaling down briefly to a running feeder (usually I'm fishing a semi-fixed 'bolt rig') produced a welcome roach of 1-05.
Three days later and I was back for a short afternoon session which produced a 6-04, and a new personal best of 7-09, both taking two grains of fake corn popped up on a very short hook length.
Finally, on July 1st, my tally increased with fish of 5-12, 6-11, 5-11 and 5-10 all on big halibut pellet and switching to a light rod, running feeder and worm bait gave me a nice fish of 7-00 but the outfit didn't really feel 'beefy' enough and, should I be lucky enough to hook either a carp or a barbel, would probably be hopelessly under gunned in the strong tide flows.
The scaling down exercise involved lighter line and smaller hooks and was something of an experiment. The bolt feeder attracts almost continuous attention from, what I suspect, are smaller fish nipping at the ground bait particles but using big hook baits prevents their capture.
I'm hoping their presence, and the consequent activity in the swim will eventually attract either a carp, or a barbel as well as the bream, but this remains to be seen.
It's curious that these fish are all of a similar size indicating that perhaps they shoal up with others of their like and. although we're unable to continually feed the swim, it would seem that they're staying put, at least for the time being.
I'm fairly sure, as many of them have very distinctive markings, that we're not getting many recaptures but, I try to photograph every fish I catch so that in time we might be able to identify any individuals that turn up more than once.
Whatever the case , It's enjoyable coarse fishing and, as strong winds have prevented me going to sea, a welcome change.