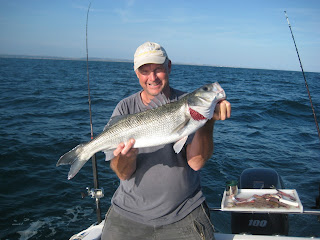 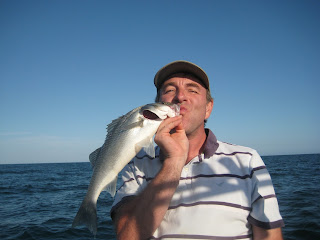 My initial plan today was to stay local and try once again for some bass but having told Alex, my crew for the day, about yesterday's turbot, he was keen to get down there and try to bag his first of the specie, and I was game for some further experimenting.
The 5.9m tide was however, pushing the envelope a little and we left the bank #46 , after thoroughly scanning it, having caught a bass and a plaice each but no sign of a turbo.
I'm not entirely convinced that the size of tide was to blame as drift speed weren't that quick but it was easy to cite as a reason and talk each other into a change of tactics but, it may demand further investigation.
We'd left the harbour at 10 am and intended to stay out over the lock out which meant fishing into the early evening-my favourite bass time.
My special mark at #6 probably hadn't been disturbed all day, most of the boats taking advantage of the fine weather, looked as if they'd chosen the Kingmere area, so it was selected as a spot to drop the pick and fish some big baits as the tide began to flood.
I'd chosen to slide a live mackerel on a fixed line on one of my rods, something that Alex had not seen succeed before, and I soon had a blistering run which, after positively the finest fight I've had from any bass, produced this eight pounder.I did think , at one point, that this line stealing torpedo was a tope and was surprised to see 'silver' when it reached the boat.
Unfortunately the circle hook had settled in the gills and the fish had to be dispatched but will not go wasted and produced two very fine fillets indeed.
Some smaller bass , bream and cats fell to mackerel sections to finish off yet another successful day's fishing. 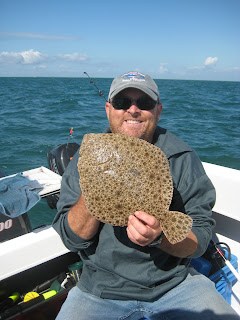 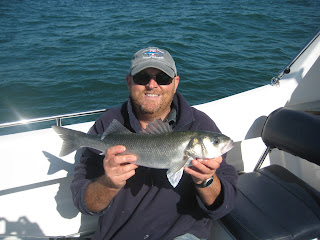 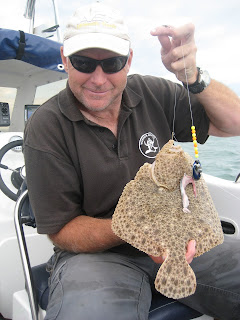 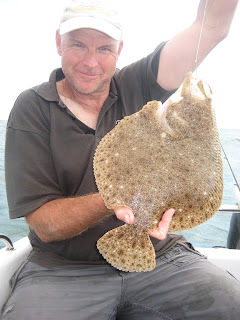 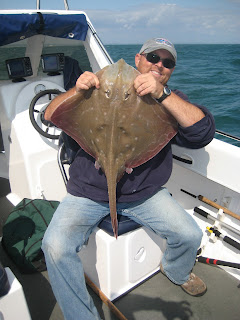 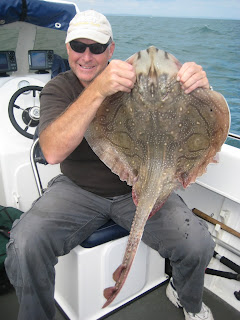 Today was a day for taking a risk, and doing some experimenting.
Perceived wisdom states that targeting turbot on a sand bank such as mark 46 should be done on a smaller tide however, whilst I agree that plaice prefer their baits to be speeding past at no more that a knot and a half, turbot may be a little different.
Wayne's lent me a stack of Boat Fishing Monthly magazines with a few articles penned which suggest that turbot don't mind faster drift speeds. I'm not a great fan of angling magazines. Usually, publications such as Sea Angler are merely tackle catalogues with low quality writing but BFM is actually a breath of fresh air and of a reasonable literary standard, so I did take a bit of notice of what was being said.
Today's tide was a 'middling' 5.6m at L.A which is usually considered too big for this sort of fishing but, with so few chances available for me to get a turbot, and with little else going on locally, I was determined to give it a try.
I'd also been put on to a 'bling' rig by Neil that had worked well for one of his clients, out fishing the other crew members on plain traces by a considerable margin.
I'd constructed my own interpretation of the rig and was eager to test it's effectiveness. In addition to the normal running leger , It comprises an additional weight in the form of a drilled bullet , followed by a bar spinner blade, a series of yellow and orange beads, and finished of with a 4/0 fixed pennel on a 12 inch hook length-the whole rig being about 4 feet in length.
Despite the size of the tide and the shallow nature of the bank, drift speeds weren't excessive -perhaps averaging 2.5 kts but, this may have been held back somewhat by a breeze blowing against the ebbing tide .
Wayne joined me for the trip and soon kicked off proceedings with a bass, and then a turbot which turned out to be his first ever of the species. Sunsequently a steady procession of five turbot took a shine to my bling rig. None of them were particularly big , 4lb maybe, but a couple were taken for eating and provided a delicious evening meal.
Over the slack water period we had a ray each -Wayne's an 11lb small eyed  which is a boat first for me, and mine a 13lb undulate to add to a very interesting day's fishing and particularly satisfying to discover something new.
Posted by Unknown at 12:44 No comments:

We do seem to struggle with the local inshore boat fishing in August and I fail to understand why. The charters are still drifting mark 13 for plaice, as well as moving slightly inshore to pick up undulates but generally, the concensus of opinion is that the fishing is a bit slow.
Neil admitted to me that he gets a bit bored with plaice but that is what the punters want, so that's what they get.
Some of my marina mates even lift their boats out for maintenance and, with generally good weather, it does make various jobs much easier.
Dave joined me for this one and it was yet again,a trip targeting bass.
We started with lures on mark 9 picking up a few pollack, ballan and cuckoo wrasse on our fiiiish minnows before trying static dead mackerel and cuttle on mark 5.
I did pick up a bass here of about 3lb but it was slow, and it was a similar state of affairs moving over to mark 6 which has been so kind to us in the past.
Bream and cat sharks did show but, once again, it was a pretty lack lustre performance and listening to the radio, the paying customers weren't having much luck either unless you were out far on a wreck somewhere.
Posted by Unknown at 12:38 No comments:

But not a lot else.
Having said that , I was fishing two live mackerel and targetting bass on mark 5.I did try some half mackerel dead baits but these were being stripped by small bream as I found out when I scaled down to a size 1 hook and mackerel strip to match.
Actually, a couple of the bream were reasonably sized but they were not what I was after.I persisted with the lives but it wasn't going to happen.
You just cannot win them all I suppose but I did come back with about sixty mackerel for shark chum so I shouldn't complain.
Posted by Unknown at 12:28 No comments: 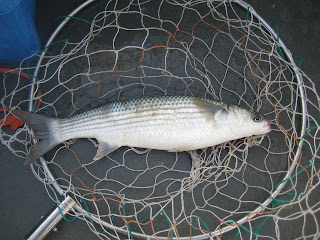 A 4lb mullet caught in less than ideal circumstances from Jupiter.
I've been meaning to have a go at the mullet that live the marina, where I keep my boat, for quite sometime but have never built up the courage to do so.
Every spring they arrive in considerable numbers and seem to be there day in , day out ,swanning around the boats and pontoons with not a care in the world, and seemingly intent on winding up us anglers-particularly me.
As a long standing mullet fanatic, who does far too little mullet angling nowadays, I've found them extremely difficult to resist for over two years but, for various sound reasons, It's against the marina rules to fish among the moorings.
Alas, I could wait no longer, and egged on by my pontoon neighbour Roger, I decided to adopt 'stealth mode' and have a crack at them this evening.
This time of day is usually quiet on the moorings. The day staff have gone home, most  boaters have finished their business and are at home watching the telly (why I don't know as evening fishing at sea has so much to offer), and only the security guard (Dave on this occasion) remains. Hence, there are less people to upset.
To make the most of the flood  the boat needed turning around on its mooring so the stern faced down tide. This also gave me access to a clear patch of water which I reasoned would give me enough room to play a lively mullet without getting too near any other boats, and their line cutting under carriage.
A vegetable sack with a loaf of white, mashed  bread was set up on the side cleat of the boat and occasionally agitated to release the fine white particles, which mullet cannot resist, into 3ft of water. Tackle was a 9ft light spinning rod(short and easy to conceal) with just a hook and a couple of split shot to tension the line(tight lining), the bait suspended as close to the sack as possible and in mid water. This tactic has worked well for me in the past in similar 'urban' mullet environments and I didn't have long to wait for it to work tonight.
The key is to make the hook bait stand out by ensuring that its slightly larger than the particles leaking out of the sack. I've actually watched mullet in the lower river actively select the bigger bait samples so know first hand of its effectiveness.
Commencing fishing I kept one eye on the rod tip, and the other on the lookout for Dave.(I'll get a right telling off if he reads this)
I peered over the side of the boat just as a  mullet swam right under the sack and a few minutes later the soft topped rod pulled over and I was in on the first cast. Actually, the first drop.

The mullet just did not know what had hit it, and was clearly totally confused. It did nothing more than wallow on the surface for a few seconds before I was able to swiftly scoop it up in my, wholly unsuitable, boat net at which point it decided to wake up. By then it was too late.
After a quick snapshot and weighing before slipping her back into the murky water , I fished on for about an hour or so. I did get one more bite, unfortunately missed,  but that was that and I managed to sneak off home with no-one the wiser to my covert operations.
Posted by Unknown at 16:21 No comments: