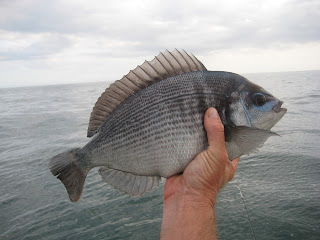 Littlehampton's black bream are the stuff of legends.
I've been collecting old issues of 'Angling' magazine recently- an excellent publication which ran through the sixties and seventies, and within its pages are several articles referring to  West Sussex bream  and in particular, the high quality of the boat fishing out of Littlehampton and the famous 'Kingmere' reef.
In the past ,due in no small part to the popularity of the summer bream , our charter fleet was much bigger than it is today and I suspect, that sea fishing generally was actually more widely practised .
Perceived opinion is that there were far more fish  in sea the back then but, today, despite the passage of time and the pressures on the fish, we can still catch some very good bags of black bream.
In an article written by Clive Gammon as far back as 1969,  the author promotes the virtues of catch and release in order to preserve the bream stocks  and generally nowadays, anglers are more conservation minded and take only a few for the pot.
However, this is not always the case.
I recently had a very interesting conversation with one of our local charter skippers who had  taken a crew bream fishing. These 'efficient' anglers employed boiled rice ground bait to attract the bream to their baits and proceeded to fill a huge cool box with fish, and then some.
They were so 'clued up' about the fishing,they even asked the skipper to move the boat over the slack tide as they knew that it was being pushed off the mark, and therefore away from their fish.
Of course ,as paying customers, the skipper had to oblige and despite trying to 'educate' them, the crew were having none of it and took everything.
He told me that he was very disheartened by the whole affair and actually said that he was pleased to get back to port when the day was over.
I too went bream fishing this afternoon and did very well indeed with some twenty odd quality fish in a short time but, just the one was taken for a meal and that because it was deeply hooked.
Generally all our reef marks, not just the Kingmere, fish well for bream at this time of year but I've found one in particular that seems to consistently produce a very high average size .
The fish pictured weighed just over the 3lb mark and there were several other similar fish in today's catch.
Though coming very close,I've yet to break the 4lb barrier myself, but fish of this size have been caught on my boat, and suspect that there is one out there with my name on it.
I enjoy bream fishing as there's an element of  'angling' skill involved working the bait in the tide and its certainly something that improves with practice. It's aesthetic nature actually reminds me a little of freshwater roach fishing.
Once the tide 'dies' , the bream appear to go off the feed, however, I've discovered that they will take tiny squid baited 'sabiki' lures, actually intended for pouting live bait, fished on the drift.
Several of these culprits took a shine to my lures today delaying the bait catching in the process .
I have tried for bream over slack tide by fishing 'up' in the water column sometimes even using a float but have never succeeded in catching with this supposedly 'recognised' method. I've got my doubts on this score so will pursue my own methods.
On the subject of baits for bream, apart from filling the bend of the hook with small strips of cuttle which are all but indestructible, I've found a cross section of still frozen squid, complete with guts etc beats all the others hand down-especially for the bigger fish. I usually stuff a size 1 Mustad 'viking' with the bait and its better if the squid itself is quite small.
Two layers of  meat make for quite a robust bait.The guts soon defrost allowing scent to dissipate in the water which I believe works as an attractant.
Lifting the rig off the sea bed regularly , definitely induces the fish to take, probably by alerting them to the bait. I was able to use as little as just 2oz of lead today to achieve this even at mid tide.
My original plan was to proceed to fish for the smoothounds which are showing in good numbers on our mixed ground marks but, the temptation to collect a few pout and hunt for some bass proved too much however, this was a bad move.
My lures produced some good wrasse but not one bass, and the live baits were left alone wherever I tried them. They were conspicuous by their absence today but I just can't help trying for them. Even Martin, a bass guru, who was also out this afternoon failed to locate the 'spikey' ones.
Next time, I'll go for those hounds.
In the end I dumped the anchor down again and went back for a few more bream which obliged accordingly.
Interestingly, despite sea conditions being calm where I was fishing, five miles to the east of me Martin reported some pretty nasty weather.........and it was heading my way.
I was barely twenty minutes from port so continued to fish but,with every cast, I glanced back over my shoulder studying the sea.
When it eventually arrived I realised that Martin had not been exaggerating. Literally within a minute the wind whipped up the sea considerably and conditions deteriorated to 'uncomfortable' so I decided to 'whip' up my anchor, and head for home.
Of course the Warrior took it all in its stride and the ride home was fun, but this was one of those rare occasions when I would have not enjoyed being out in a 'lesser' boat.
An hour later looking out of my kitchen window and the sea is calm once again illustrating the unpredicatability of an easterly wind!
Posted by Unknown at 13:59 No comments:

With limited time available this morning I set off  with just lures , aiming directly for one of our quieter reef marks.
A couple of nice bass, plenty of plucky wrasse and a brace of very big mackerel, a welcome sight, kept me entertained for the three hour trip before heading home for the afternoon 'mission'. 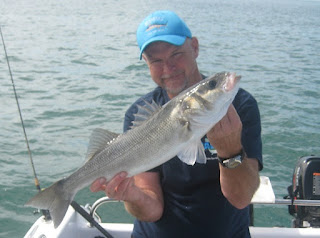 Dave and me have decided , between us, to put a boat on our favourite river in order to get the best of the available coarse fishing, in particular pike.
We've done a little bit of boat fishing before on the venue and with some success but, Its always been quite a 'work up' getting afloat as access is very limited and , being tidal,  launching a boat from a trailer proved to be quite a difficult and time consuming operation.
Dave did have a small aluminium boat but it rarely got used, for the above reasons, so was sold prior to a house move.
Having already secured a mooring, we needed a boat to park on it. so a trip around the M 25 to Dartford was undertaken to view a prospective candidate. In short, the package seemed ideal for our purpose so, a deal was struck, and a 'new' addition to the fleet was towed home that evening..
'Finatic' is a very old (early 1980s maybe), but sound 16ft Orkney Longliner (my third example of the marque) and it'll be pushed along by an equally ancient, but very sweet running 6 H.P Mariner 'two stroker'. 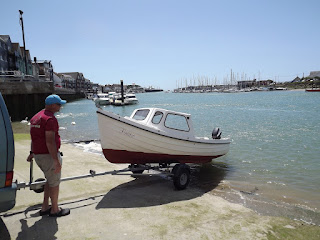 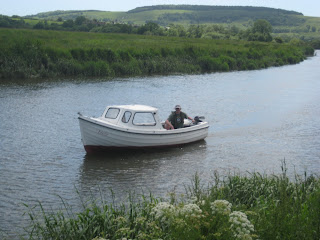 After giving it a 'going over', two days later, we launched Dave at the public slipway close to the river entrance and sent him on his long journey upstream with the tide, whilst I followed by road.
I'll admit to feeling quite relieved , and a little excited when I finally spied the boat arriving at the mooring a couple of hours later.
The only slight 'glitch' was that the engine cooling system malfunctioned causing some over heating and slight loss of power.  The little unit was easily lifted off the boat, which remained on its mooring, and taken home for closer inspection- a major advantage of running such a lightweight outboard.
With the gearbox removed-a five minute job, the water pump impeller was checked and found to be in excellent condition however, the waterways were blocked by some hardened debris obviously picked up from the river. Once the  system was cleared the engine once again ran sweetly, pumped water strongly and, kept its cool.
Its actually quite a joy working on an outboard engine like this one with its 'old's cool' technology . Modern boat motors are no doubt, very clean ,efficient machines but lack the simplicity and ease of repair of their predecessors with their  pre mix fuel, carburettors, CD ignition and smoky exhaust.
I wonder if the fuel injected, computer brained 100hp Suzuki on my Warrior will still be running in 2050! 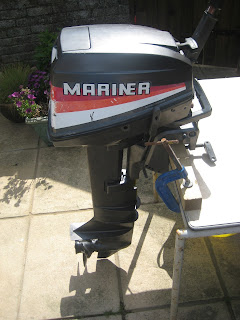 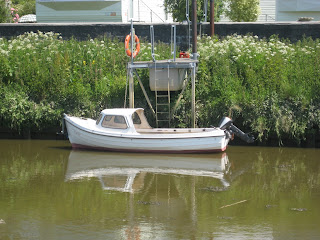 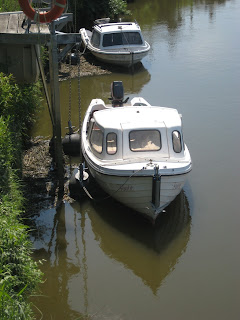