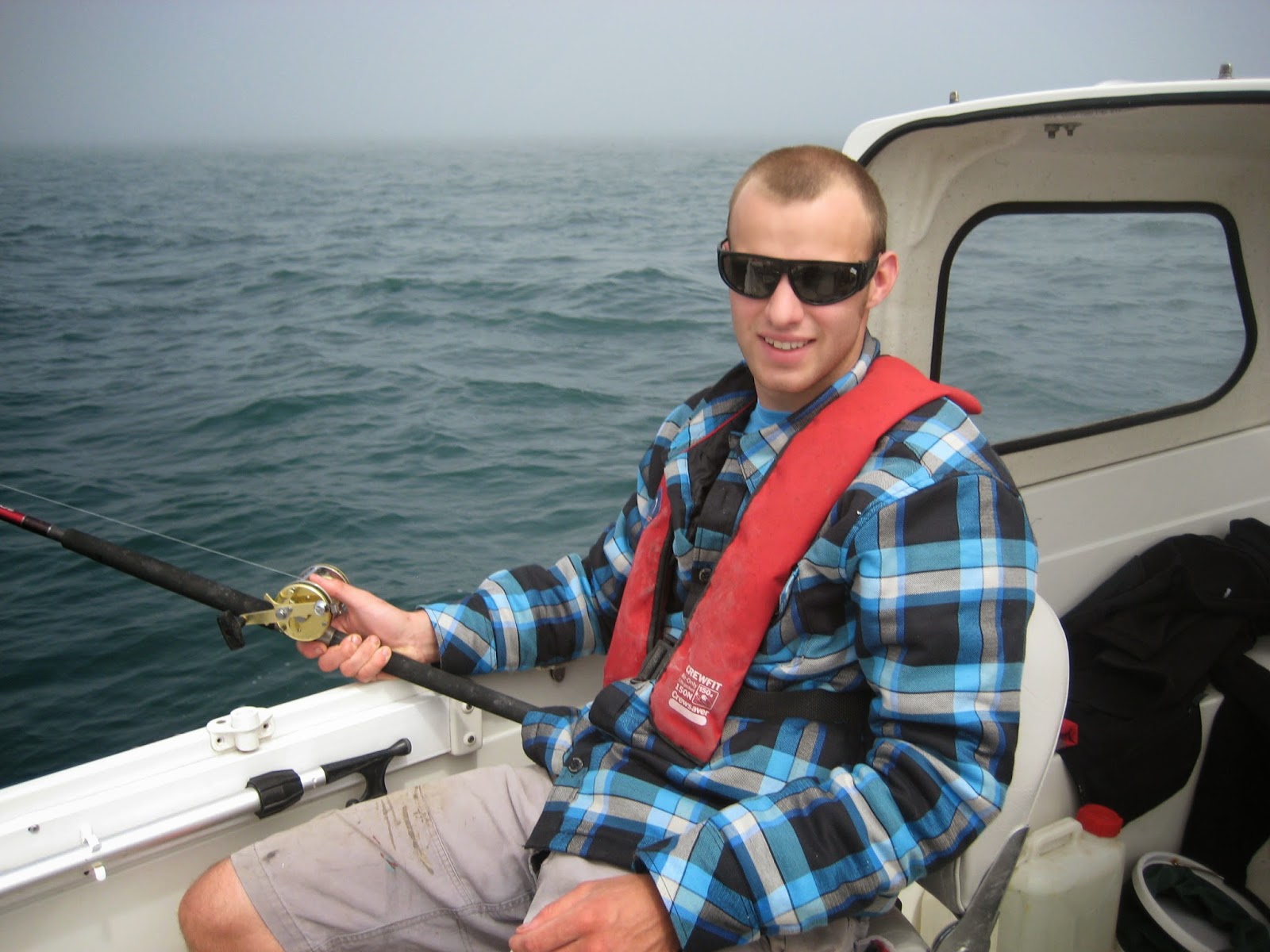 I've been waiting to take my son, Jack out for a fishing trip in my boat for a long time and as he was visiting this week-end, and the weather was perfect, It gave us an ideal opportunity.
I had taken him fishing before when he was a youngster, but he didn't really take to it although he does like to do a bit from a kayak near to his Devon home and has had some success with bass and mackerel. I think, like a lot of non anglers, he only sees a point to it if you've got a chance of taking something for the pot which is fair enough.
When we arrived at the marina it was engulfed in thick fog and, If it wasn't for the fact that a few boats were already missing from their moorings, I may have been a little bit dubious about going out in such conditions. Jack didn't seem to be bothered and, as the sea was calm, we headed off anyway thinking that the sun would soon burn off the gloom.
First stop was just east of The Winter Knoll where Jack dropped a set of feathers down for some bait and within a few minutes he'd landed more mackerel than he'd ever caught in all his combined fishing trips of the past. The shoals were clearly showing up on the sounder and, some nice joey sized ones came up too, ideal if kept alive and also perfect pike bait size.
Apparently getting mackerel hasn't been that easy of late so we were a bit fortunate to have stumbled across so many so quickly. We soon had enough so moved on to our first anchor mark at Black Ditch.
A few small bream showed up nipping at the baits with only one, of a couple of pounds, worth taking  but  I caught a thornback of around 5-6lb to add variety. Rather stupidly I poked my finger around in the Thornie's mouth a bit searching for the hook, and paid the price with quite a few nasty lacerations when it decided to clamp on. Lesson learned. 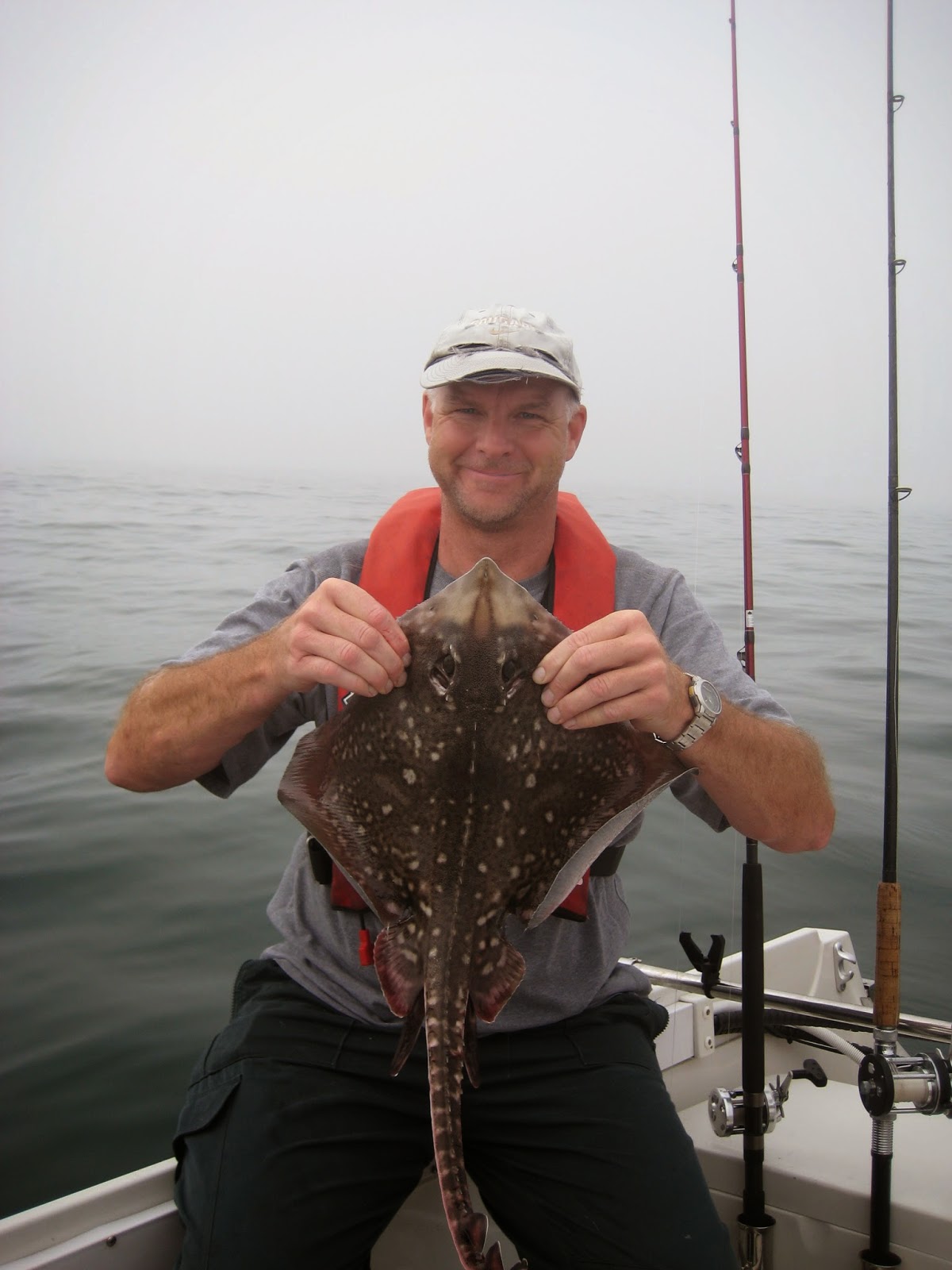 As the tide slackened things quietened down considerably, so we moved to East Ditch-in fact just off the reef proper as there were a few boats about in the still murky conditions. The tide was still slack so I decided to drop over a mackerel flapper on a 6/0.It didn't take long before another thornback came up, but a much better one of about 10lb 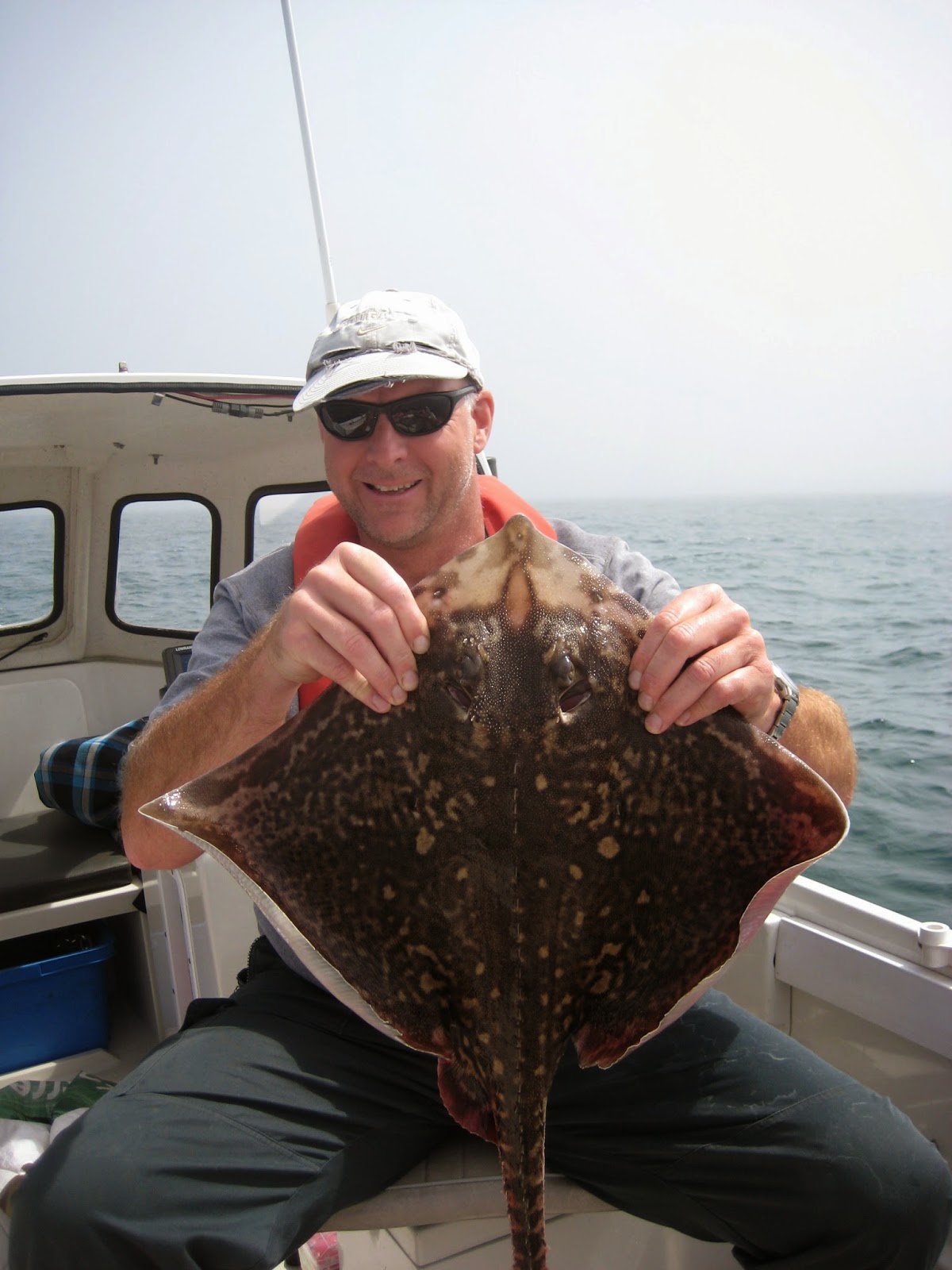 followed later by a rather lively tope (around 15lb) also on a flapper(luckily lip hooked), which proved to be quite a handful in the boat. 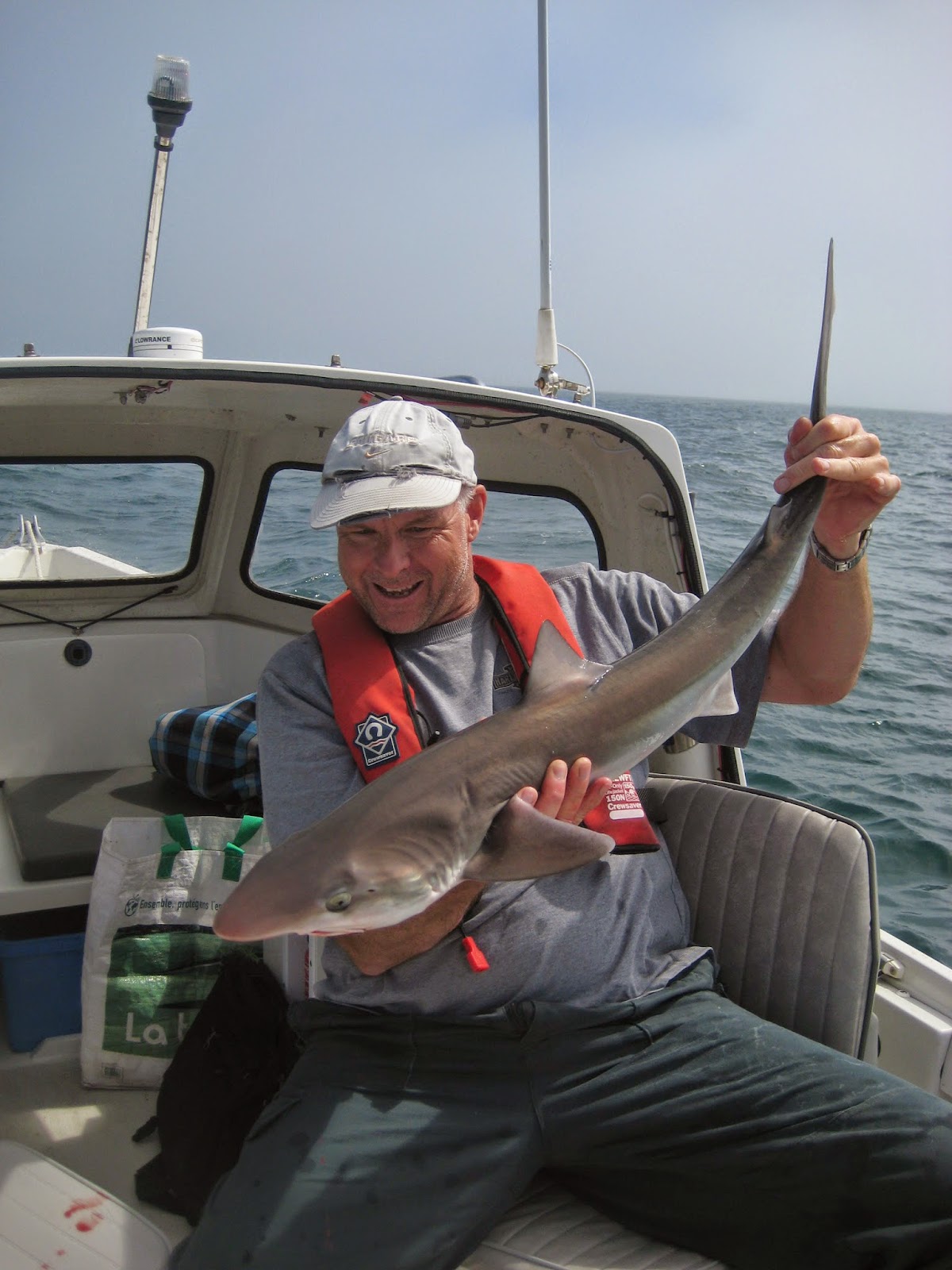 Jack picked up a doggie but I really wanted him to connect with something decent so rigged him up with a flapper on a 10/0 circle to commercial mono tope rig. This might sound like an extremely big hook but circles are sized quite differently and ,as both the rays had swallowed the 6/0 hooks, I wanted to try and avoid this happening again if possible and also, if tope were about, I didn't want any bite offs.
The flapper worked and before long a tentative bite produced this lovely 14lb undulate neatly hooked in the scissors. 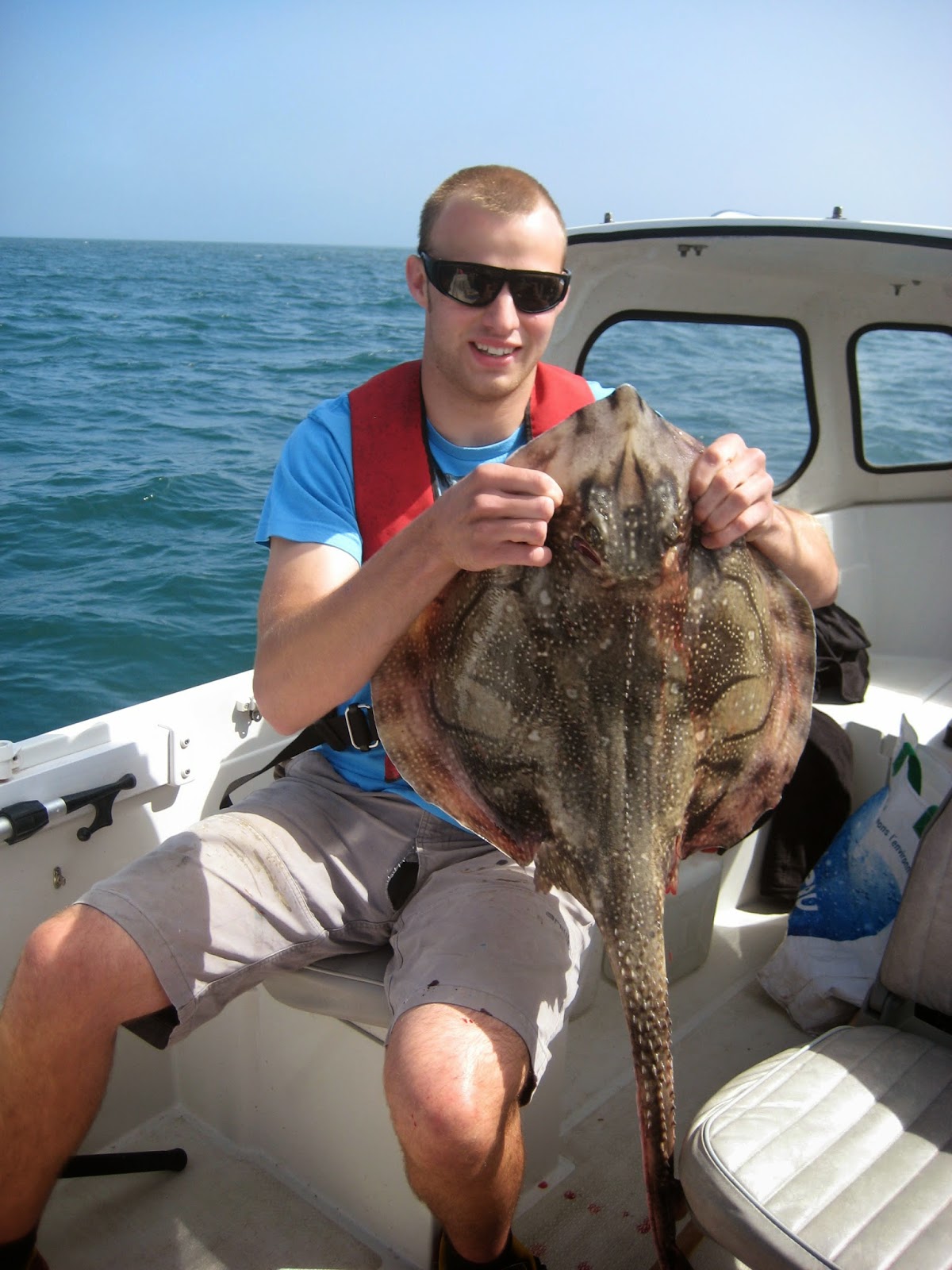 A quick turn of the circle and it dropped out, a far more satisfactory outcome . I shall be using circles a lot more in the future.
The fog did finally burn off giving us a view of the coast but, the boat never quite turned in the tide, as the easterly wind was pushing the hull in the opposite direction, so we packed up and headed home around 4-30, an hour later than planned.
Terrific trip and great to finally do some 'Father and Son 'stuff with Jack who really enjoyed the fishing, and proved to be excellent crew despite having little previous experience. 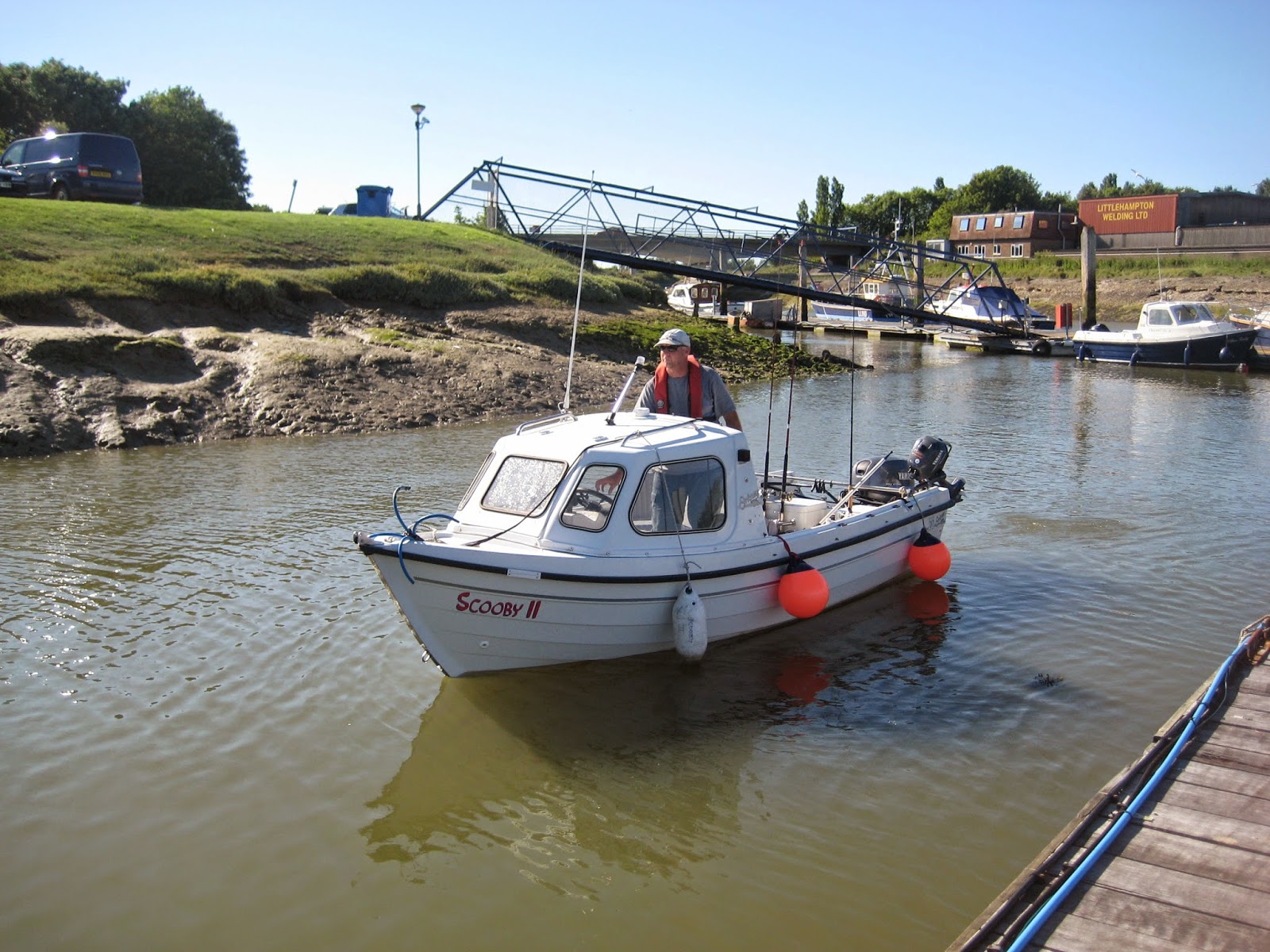