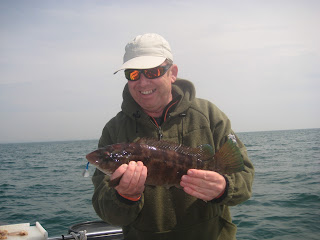 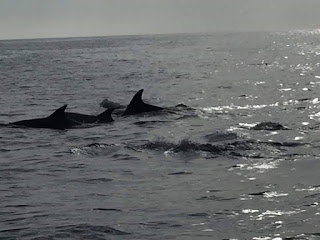 The fifth of the month saw me running the boat out to one of our better known reefs in search of a bream or two, which have just begun to show up in our area. Pickings were slow on my first stop on the edge of the rock but, after  relocating the boat to a mark on the main reef #13, a few more modest sized bream began to show.
I always leave the sounder running even when at anchor and , glancing at the screen my attention was caught by several marks moving under the boat. Bass was my first impression and without thinking I cast a soft plastic about and was proved to be absolutely correct. The shoal hung around for a while and I managed to take about a dozen or so fish of modest size before things quietened down and this is indeed the first time I've ever taken bass in this way at anchor.
Deciding that drift tactics would be more productive, I upped the 'pick' and set about catching a few more, along with the usual run of ballans and Pollack. However by that point, the easterly wind had set in enough to make things a little uncomfortable so the anchor went back down again, and a few more bream were captured before I decided I'd had enough of riding a 'bucking horse'.
The 'fun run' home, at displacement speeds was interesting to say the least and on stepping on the pontoons that rare feeling of still being afloat was experienced which goes some way to show just how rough the sea had become out there.
A couple of days later and things had calmed down a little.
Russ is an old fishing mate of mine from many years back in a 'pre boat owning' era when our main target specie were thick lipped mullet. He was a bit of a dab hand at it, to be honest, and is one of the select few anglers ,that I know of, who captured a seven pound mullet from our local river way back in 2002-no mean feat indeed.
Unfortunately, Russ has somewhat lost his way in the intervening years almost entirely giving up fishing for more 'active' pursuits involving quite stressful physical activity such as competing in triathlons of all things.
Wisely of late, he's seen the error of his ways , has rekindled his interest in our great sport, and was keen to try a trip out with me in the boat.
Our first target ,at #9, was to do a bit of lure fishing but, on the run out and within minutes of leaving the harbour, we stumbled across a big pod of porpoise which was great introduction for Russ.
Wrasse , pollack and the odd bass, just the one in fact, showed up to the lures but, in general, the fishing was comparatively slow however, my crew mate didn't seem to mind in the least.
We also spent a bit of time at anchor on the bream which weren't around in any  numbers although ,we did manage to boat a few.
Despite the less than spectacular fishing, Russ seemed to enjoy the experience and will hopefully be a regular on 'Jupiter' on future trips.
Posted by Unknown at 10:05