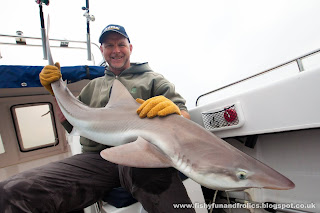 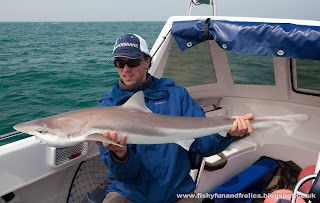 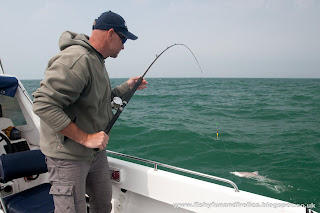 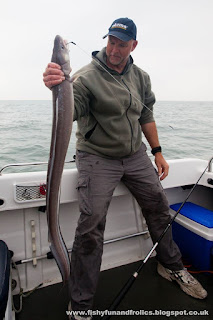 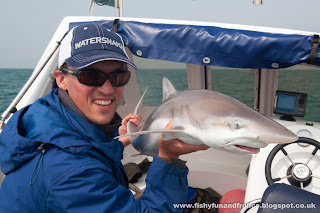 Sam had expressed an interest in catching a tope, a specie he'd yet to encounter, so a plan was hatched.
Ideally I'd be looking for sub 5m tides tasks for this task i.e neaps that come around every fortnight. Usually just three or four tides fit the credentials but, in the current set, only two tides were smaller than the benchmark, and these fell on days with forecasted wind speeds too high for comfort.
In the event I chose the best day wind wise, but it coincided with a 5.1 m tide which is pushing the envelope just a little however, I felt it was worth a try especially as , consulting my records showed that I'd managed it (just)in previous years.
The small tides are necessary because of the depths of the chosen marks which average a hundred feet, and are in an area of extremely strong tide flows. Too bigger tide would make the mark near impossible to fish due to the amount of lead required to keep baits down on the sea bed effectively.
Not wishing to waste time on bait catching , as mackerel are still very thin on the ground once again this year, we opted for frozen baits which have served me well in the past.
In my experience, tope don't appear to be fussy when it comes to dietary requirements and if they're there, they'll 'have it' whatever you put in front of them.
The fishing was steady , If a little slow  compared with previous trips to the mark, and the best sport came around the slack water periods but, I was pleased with the end result considering the size of tide.
About ten tope were caught, Sam indeed getting his first ever, along with a few companions and commenting that he'd rarely experienced such a hard fight from U.K species. Most fish were in the 'upper teen' bracket with one or two in the low' twenties'.
Biggest on the day was  a thirty five pounder to one of my baits and Sam's photography skills were gainfully employed on this one.
A few things of note; the strap conger pictured above is the first of its kind I've seen from this mark although various rays and dogfish are often found here.
I progressed a little with the 'up tide, down tide' method  simply swapping the standard lead for a 'gripper', casting a short distance up tide, or even dropping the lead straight down, and letting out a big 'bow' of line before setting the rod in its rest.The 'trick' worked well producing a few tope and, despite the lack of direct contact, bites showed up well and were successfully connected with clean hooking , due in no small part to the use of circle hooks.
;At one point whilst listening to varied 'banter' on the airwaves, I heard the word 'thresher' mentioned. Having done a bit of digging around on the web, it turns out that a small thresher shark was spotted breaching not that far from our location-food for thought indeed.
Posted by Unknown at 08:12