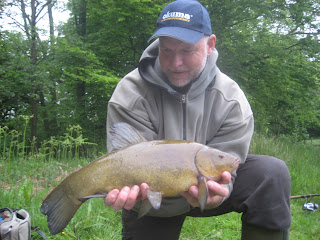 Back in November I was asked to give a talk to a local fishing club about my small boat shark fishing. Despite being very nervous and, I'm told a little shaky vocally to begin with, the presentation seemed to be quite well received by those attending and proved to be quite a satisfying thing to do. Also appearing that night was a Sam Wadman who had recently made a TV appearance on the BBC's 'The Big Fish' competition and finished  a very creditable runner up.  Sam is very much a globe trotting angler having fished in some exotic locations and snagged some equally exotic fish, but back in 'blighty' we seem to share very similar angling interests so a meeting was arranged. 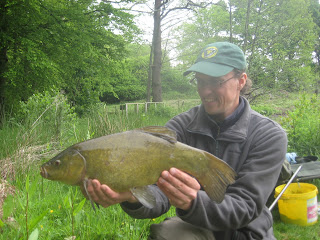 'The man' very kindly managed to secure me a day ticket to fish on one of his club waters a truly picturesque stream fed lake which has a small head of genuine crucian carp . Not an easy specie to find nowadays due, I assume, to inter breeding with other 'lesser' carp species, I hadn't actually fished for crucians since I was a spotty teenager in the mid seventies.
Sam's had some lovely specimens from the water recently and this whetted my appetite for these elusive shy biters but the day was really more about meeting and sharing fishy experiences.
Another 'sparrow's fart' start was undertaken (I'm getting a bit better at  getting up early of late)and Sam's advice of light feeding so as not to attract too much attention from other, more dominant species, was followed but In the event, the crucians , typically, didn't show their faces.
What did turn up however was a brace of pristine tench each along with a few very nice roach and an errant jack pike which took a liking to Sam's feeder. Disappointed? Not in the slightest although I'm sincerely hoping that I might , one day, get another chance to have a go at these, the most wily of fish.
I've been receiving a little friendly 'ribbing' on social media of late about my choice of method when it comes to my recent  tench fishing exploits. Apparently, my 'bolt feeder, buzzer' approach has met with some disapproval from more traditionally minded angling acquaintances so today I sought to repair the damage by fishing float and 'pin. I hope that goes some way to restore my reputation.LOL 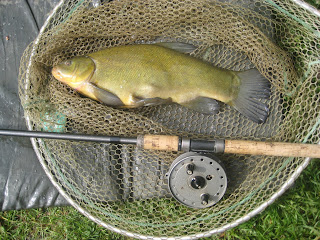 Sam's tales of foreign travel and catches were indeed fascinating and have inspired me to think carefully about options for my own 'list' of future  trips but, in the meantime, I'm sure we'll hook up for some more domestic fishing together soon.
Posted by Unknown at 10:10