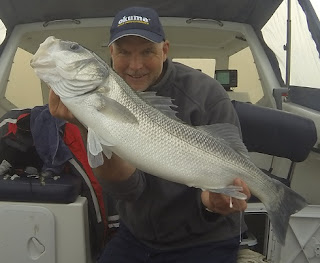 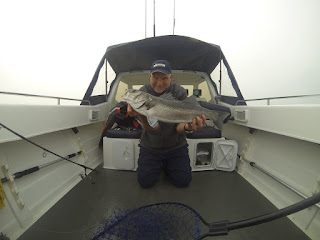 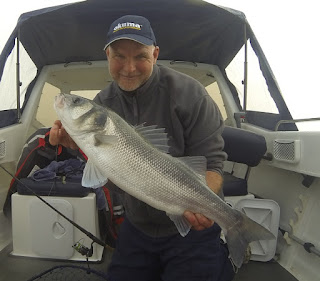 Thick fog shrouded our area of coastline today making navigation slightly more difficult than usual and highlighting the need , for me anyway, to ensure that I'm equipped with the necessary tools and skills should my electronics fail. A compass, chart and the ability to use them is all that's needed but a light hand on the throttle, and a keen eye are also essential and I try to ensure that I tick all the boxes where the above are concerned.
The only advantage of this sort of weather, if indeed you could call it that, is the ability to 'hide' and fish in peace so, I actually quite enjoy it when its like this in some perverse way.
Initially, I was to anchor up and bait fish for bream but, as I approached the chosen mark in the gloom I could see that it was quite heavily populated with boats so decided on a detour and, like you do, I got waylaid.
Investigating a nearby mark that was completely deserted, or so I thought as I could see no further that a couple of hundred metres at most, I started to see some tell tale signs of shoal fish on the finder screen so, set up a drift, and dropped the lures down.
The mark occasionally produces bass and they were there on the day in numbers, though not particularly big ones. However, I had continuous sport drifting with the flooding tide, which seems to work well here, and managed to keep up with the shoal on nearly every drift.
This was actually no mean feat as , with low visibility and no points of visual reference, steering became quite tricky and I was relying heavily on the compass to give direction on each return run as well as the plotter which, like most, has a slight time delay between where you are, and what shows on the screen.
I soon lost count of the bass caught but, as I say, most were of a modest size with perhaps a three pounder here and there.
As the flood tide lost its momentum the shoal became more difficult to locate and eventually bites ceased completely.
I had the tank on board so decided to try and gather some live baits over the slack water period but, could only manage  three pouting on tiny baited feathers before the tide began its ebb. A few drifts on the mark produced no takes and nothing showing on the 'screen' so I decided on a move back to my originally Intended mark which I guessed might now be empty.
On arriving it was indeed deserted allowing me to drift unhampered -most boats had opted sensibly, to head inshore in the deteriorating visibility which was by now down to just a few yards.
From the first drift it was clear that bass were present , and of a much better size as both lures and live bait were taken on nearly every run. I only managed to weigh one fish, at 8lb 2oz before my scales went 'kaput' but there were several reasonable fish in the catch with perhaps half a dozen over the 5lb mark. Some of the better ones are pictured above.
All three live baits produced a fish each but a larger pouting was rejected a couple of times perhaps by smaller bass failing to hook up.
The fishing continued well but I decided to call a halt to proceedings a little earlier than necessary to get over the bar, in order to safely navigate home with time to spare.
Peering over the cuddy with the boat travelling at not much more than displacement speed was the order of the day  to maintain safe passage although, within a mile of the shore, the fog had lifted and I was able to open her up a bit and glide home with a big grin on my face. 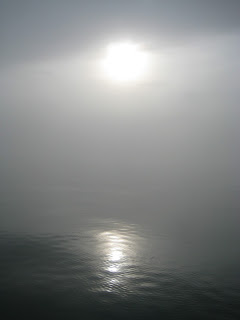