I had a couple of bass lure trips in the boat during early April and managed to find quite a few fish but, as is the norm at this time of year, they were very localised and have yet to spread out over the reef marks.
When this does happen, I can usually find a nice quiet spot away from other boats to fish, and this is my preference. Its a vast open space out there at sea but , it can get quite crowded at times.
One place that rarely gets crowded is Norway, and this year saw a return trip to the fish camp at Skjervoy high up in the Arctic circle to sample some of the excellent cod fishing.
Joining me this time was marina buddy Brian and the fishing proved to be every bit as good, if not better than last year.
We managed to get out on five of the six days heading some 16 miles off shore to marks in sometimes 150m of water. The average stamp of cod this year was much higher and 'twenty pounders' were so common that often we didn't bother to weigh them before returning them to the sea.
Within a couple of days our fish boxes, which each held roughly 20kilos of cod fillets, brought back home in the aircraft hold were full, so we found ourselves returning virtually every cod we caught. Often we'd find huge shoals of small coalfish up to a quarter of a mile in length  populating the water from 15m below the surface to 10m from the sea bed. What lay beneath were some very dark backed and impressive looking cod which , if we could get our lures through the 'coalies' provided some excellent sport.
Speed jigs rigged with a single assist hook did the trick here and I recommend anyone who is intending to fish in Norway take some in their kit along with the usual collection of big shads.
Highlight of the trip for me however, was my first  halibut-a fish which gave me a tremendous battle on the relatively light gear and took the grey/white (coalfish imitation??) shad that proved so successful last year.
I hooked the 'but' just off the sea bed and the battle involved three very strong line stealing dives before eventually I managed to bring the fish to the surface.
I was intent on returning the fish so elected, with some difficulty, to manhandle her on board by securing a gloved grip on the trace (250lb mono) anda second hand hold, a gill plate. It wasn't easy but I managed to slide her over the gunwale and what an impressive looking creature she was.
I'll never know what she weighed as I couldn't lift her clear of the deck but that's not important at all. I got the pics and managed to successfully get her back in the water unharmed before, with a highly impressive kick of her huge tail, she descended into the depths of the gin clear water. What a sight that was I can tell you.
I'm unsure whether I'll return again to Norway as there is so much other foreign fishing that I still have to sample on my list however, I'd urge any keen boat angler to give it a try as the fishing, and the environment can be simply stunning, and hiring a self drive boat makes the whole experience  extremely satisfying as you're doing all the work yourselves.
Norway can be very expensive ,especially food prices which are very high, but these trips are actually comparatively good value as the accommodation and boat hire is reasonably priced and flights from the U.K are hardly expensive.
Obviously, as with boat fishing at home, you are very much at the mercy of the weather and, in this respect , I've been extremely lucky on both visits losing only one day's fishing in twelve.
If you'd like any further information on this trip please don't hesitate to contact me direct as I'll be only too pleased to help. 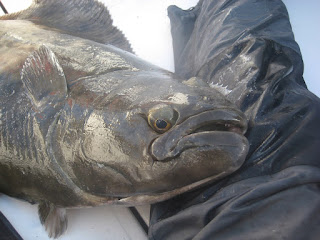 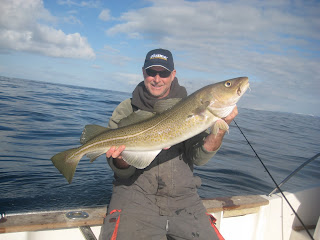 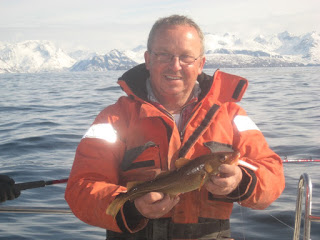 Brian with a monster 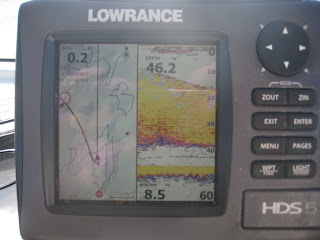 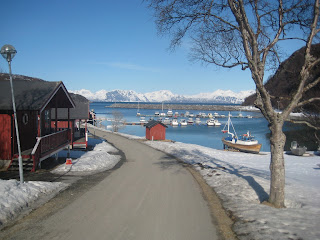 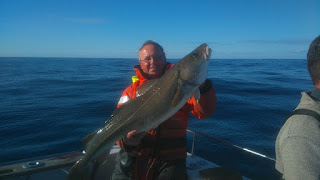 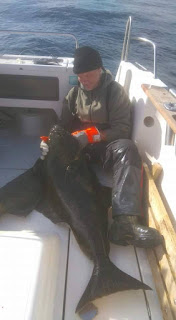 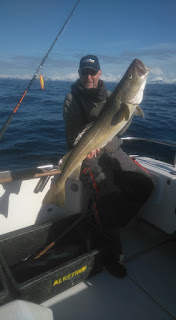 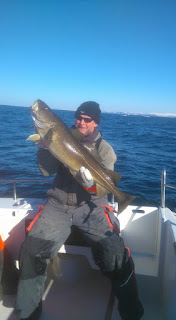 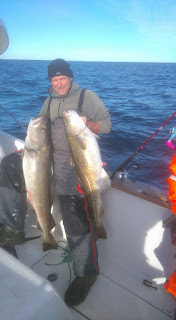