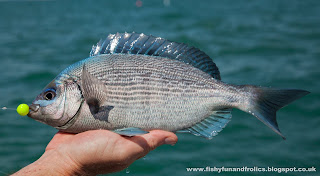 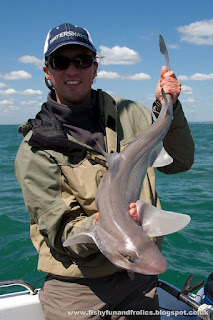 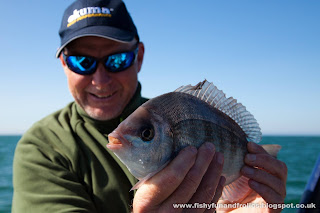 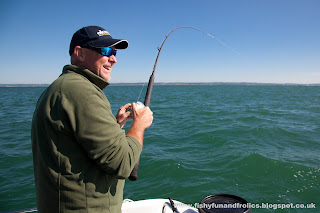 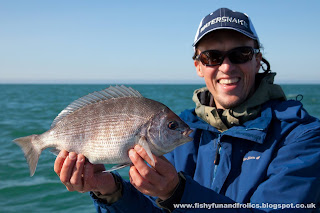 Black bream have been showing in good numbers on our local marks for quite a while now so I thought it was about time I got in on some of the action.
Joining me for the trip was Sam and a very early start was made in an attempt to fish in peace and quiet before the main 'fleet' showed up on our chosen spot-one of our more well known marks. This actually proved to be quite unnecessary as very few boats had decided to venture out on the day perhaps due to the forecasted easterly winds.
The saying goes 'when the wind's in the east, the fish bite least' and this may indeed have some substance as the bream weren't exactly easy to find in quantity. We ended up with about a dozen  or so fish, less than I'd usually expect to catch, and they took some finding with several changes of venue during the day although Sam did manage to pick up a smoothound on a bream bait which livened up proceedings.
Also scarce were bass. I'd hoped to show Sam some of our local 'spikies' by doing a bit of lure fishing but , apart from a few wrasse, the fishing was very slow and I failed conclusively to locate any of the target specie.
So, not exactly a blistering first day afloat on 'Jupiter' for my mate but nevertheless, he seemed to enjoy himself and , at the end of the day, that's all that matters. He certainly proved to be competent crew and will hopefully be joining me on future trips.
Posted by Unknown at 06:53