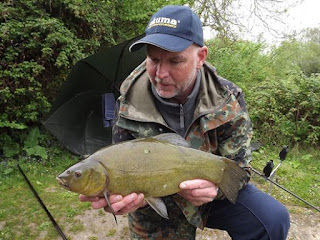 Spring tench fishing is a favourite pastime of mine and every year I try to make a few trips to some local gravel pits that have been kind to me in the past. The setting is very pleasant, the tench fight hard, and smaller 'silver' fish don't seem to be very common, so the target specie is generally allowed a chance to get in on the act.
Dave joined me for the 'sparrow's fart' early start and this proved to be a wise move as the fish were on the feed almost immediately in the low light conditions.
Being a bit of a traditionalist, Dave chose the 'float and pin' approach whilst I opted to be a 'hooligan' and fish two rods both on bolt rig feeders with bite alarms. Bait of choice was the humble maggot and past experience has shown that the red variety seems to be their liking.
Nine tench were landed equally shared among the rods, the biggest being a rather nice specimen of 6lb 9oz to one of the feeder rigs.
Light levels remained quite low , which is always preferable but, as lunch time approached, cloud cover reduced and the bites slowed down noticeably.
I did spy, what I thought, was the tail of a pike flash into my view as one of the tench was being played and this was confirmed later in the session when a rather nice pike well into double figures was clearly seen to glide through the swim . Perhaps an alternative future predator venue??
Rather annoyingly I should have landed three more tench during the session but I appeared to have either been bitten off, or my fluorocarbon hook length failed repeatedly. I'm unsure of which is the case. On testing the line it seemed to be sound but perhaps there may have been a pike in the area with a taste for maggots. Who knows.
A nice start to the tench campaign.
Posted by Unknown at 10:05