It's been a bit of a late start this season for me and apart from a few mullet in May I've not been targeting them as much this year.Not complaining mind,I've been trying to suss out the local inshore boat fishing and hitting a few 'firsts' along the way including tope and rays of various types.I've also been doing some beach 'smoothounding',when the weed has allowed,and some tenching now that the coarse season has opened.
However, attempting to resist the lure of mullet is ,of course,futile and I'm happy to report that I'm back on track and doing some 'proper' fishing.Like everywhere it seems,the mullet were late showing in the river this year but it now appears that they are well established and back in reasonable numbers .

A mate has reported some good catches from Arundel town,(a regular haunt for the locals)and I've been getting a few from more 'peaceful' stretches on low water trotting tactics, including these two at 4-06 and 4-10 as well as a handful of lesser fish.It's been consistent if not spectacular.I've not had the boat out on the river much-only once in May- taking a three pounder on a very windy day,but i'm planning to do more especially as I've forsaken the Christchurch permit this time around. 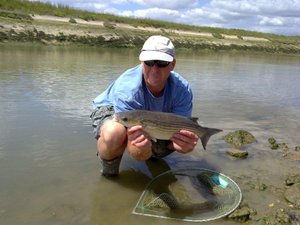 Incidentally,just come back from a short trip to Barcelona for my daughter's 18th birthday.The numbers of mullet in the harbour were simply stunning as you can see.Difficult to tell the size from the picture but, they were all in the 3-4lb class and nobody was fishing for them.