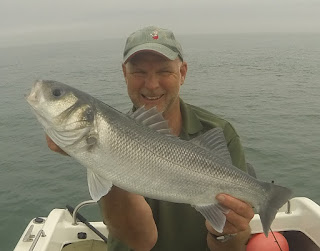 Today was one of those days when I had to search very hard for my fish despite sticking to just one mark.
I left the mooring at lunchtime with the intention of fishing the ebb tide before having to return in time to catch enough water depth over the river bar. I had about three hours fishing  on the mark and the method of choice was vertically fished , soft plastic lures- 60g Fiiish Minnows.
The first dozen or so drifts produced, apart from a bitten lure tail (wrasse), absolutely nothing but I was convinced that the bass were holed up somewhere and it was merely a question of patience and methodically scanning the area.
Eventually, my stubborn determination paid off and I successfully hit a fish on a new drift line-a 3lb bass.
Glancing at the sounder, when the take occurred, I saw what I thought  was a very prominent rock on the screen and immediately hit the waypoint button so I could locate it again.
With almost no wind to hamper my drift I returned to exactly the same line and again, took a fish within a few feet of the 'rock'.
This was how it was to continue on almost every drift and I finished up with a dozen bass before having to call it a day-no monsters but all reasonable fish with a best of 5lb on the nose.
Interestingly quite the best method to hook these fish was to retrieve the lure steadily after feeling the initial 'knock' which seemed to occur in most cases, rather than an instant take. In some ways I felt that they were actually being quite finicky  but cannot explain why.
There were very few boats out today ,  I had 'my' mark all to myself, but my good mate, and marina neighbour Tony had been out fishing a few wrecks before dropping the pick to do a bit of breaming f. He did catch a few of the 'intended' but one of his small squid baits was taken by a truly stunning bass of 14lb 11oz-well done that man.
Of course he returned the fish and its nice to know that its still down there swimming around.......somewhere.
Posted by Unknown at 13:18