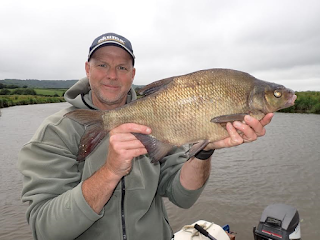 Over the past few weeks Dave and me have been prebaiting a swim on the river in readiness for the new season, our intention being, to attract either a carp or a barbel- both relatively rare captures on the venue.
The first few days of the season, I was otherwise engaged, allowing Dave to fish the swim solo and hopefully reap the benefits of our hard work, which he certainly did.
We're under no illusions that our intended quarry are going to be easy to catch and it will require some considerable 'rod hours' many in darkness, and no small amount of luck to succeed in their capture but , we know that it can be done.
In the meantime, as expected, we've been entertained by one of the river's legendary bream shoals and they're no 'tiddlers' either. Over three consecutive days fishing Dave took roughly twenty good sized bream, among others, with fish to 7lb 11oz-the most consistent general coarse fishing that we've experienced on this most challenging of venues.
Today I managed to join my mate, in less than ideal weather conditions (wet and windy) and experience some of the action for myself.
Our 'pre-bait' comprises ; mixed seeds, including hemp, which must be soaked and boiled before using, 'Vitalin' dry dog food and a bulk supply of 'donkey choker' 22mm Halibut pellets.
Our gear is basically our river pike outfits (2.5lb T.C rods) with big method feeders and a mix of pellet, boilie (flavour irrelevant)and fake corn as hook bait fished on a hair rig.
The heavy gear may not be necessary for the bream but if one of our 'intended' does put in an appearance at least we will be properly equipped to deal with them in the sometimes extremely strong tide flows.
Today I caught four bream, two at 4-11, and two more at 6-03 and in contrast to the rather lacklustre battle a bream puts up in still waters, these 'tideway dustbins' display a reasonable turn of speed using their broad flanks to advantage in the current. In short, I didn't feel over gunned.
There was constant activity in the swim all day long and our rod tips were rarely still for any length of time-mostly line bites and activity on the feeder from smaller fish we would assume. I did at one point briefly put my underwater 'Water wolf' camera down and , despite very murky conditions, big bream could clearly be seen and quite startlingly, at one point a sizable pike came into view. Food for thought indeed.
As darkness fell the bream bites faded somewhat and we continued to fish into the small hours but with little success this time around however, it's early days yet.
We both intend to continue 'grooming' this swim throughout the season ahead and it'll be fascinating to see how it all pans out. If nothing else, we'll catch some really good quality bream and personally, I've nothing against that.
.