Today's weather was far from ideal for a spot of mullet fishing from the river boat but, the tide was convenient ( we run downstream to the mullet grounds with the ebb) and , as I'd been spying quite a few skulking around the bottom of the river,  Dave and me decided to give it a crack anyway.
We headed to our favourite stretch - a shallow area just downstream of a sizable bend where the flow is very gentle allowing a delicate float trotting method to be used. Bait was the usual bread flake with 'mash' as feed.
With such a small tide however, the flow was virtually non-existent and the wind, which had developed quite considerably, was hampering our presentation .
Not only that but the swans were being a proverbial pain in the neck, which is unusual when we're afloat, so we decided to change tactics, run the boat aground and feeder fish. This proved to be a wise move.
Plenty of mullet were showing in the swim and before long bites ensued. Tentative nibbles to begin with, which is often the case but eventually the quiver tip on my outfit pulled round strongly and I hit the bite so hard , the mullet momentarily became airborn.
As usual, the scrappy little three pound thick lip had no intentions of being netted and simply darted around the boat like a mad thing.
Eventually Dave did manage to trap it in the mesh and the first mullet of the 2016 season was well and truly mine.
The scrap undoubtedly disturbed the swim sufficiently to see every other mullet off the premises so that was the sole bite in that location, and indeed of the session, as we had an appointment further upstream........................................ Hopefully, I'll be able to tell you more about that in a later entry. 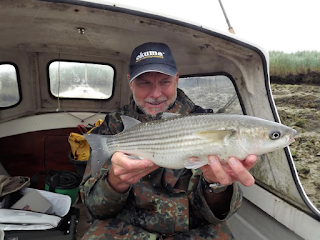 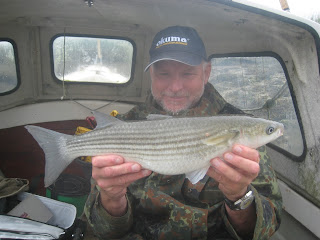