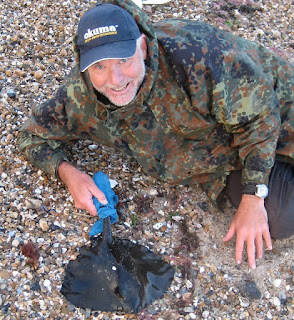 Tiny but who cares! 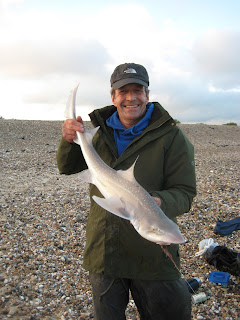 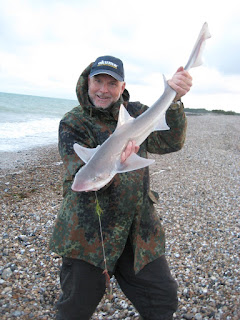 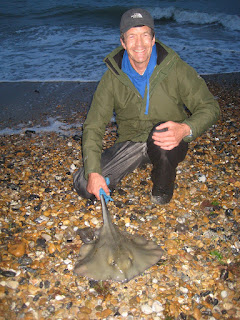 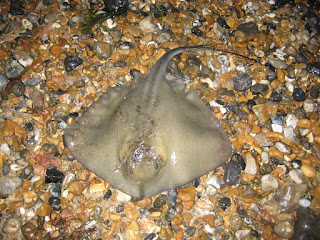 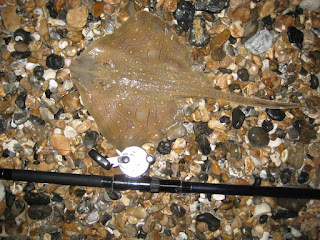 Undulate
I took to the shingle this evening for yet another attempt at catching a local stingray. This quest has become something of an obsession for me and I believe I've been trying for as long as the blog has been running which is about six years.
The recent spell of settled weather has brought very clear water inshore and combined with small tides , weed has also settled close to the wave line and hindered fishing which has been less than productive for my shore angling mates.
Yesterday it 'blew' a bit, and stirred things up , which is no bad thing, and when Simon and me arrived at our chosen beach mark the wind was still  strong enough to cause a bit of of 'chop', and the water had plenty of colour.
The weed ' issue' looked , and subsequently proved to be, quite manageable and I think we were both quite confident that the evening would 'produce' the goods.
We had a wrap of rag worm each (very high quality stuff from local shop 'Hook-A-Fish') and a few spare morsels of squid which actually proved to be an inadequate bait supply.
Bites started from the 'off' with dogfish and 'schoolie' bass until a stronger pull on the rod tip gave me my prize stingray. At last the target had been achieved , although it has to be said that It's a rather modest specimen about the size of a frying pan.
Actually I couldn't have cared less by the diminutive size of the fish and was elated with my capture which was safely handled and returned none the worse for wear.
Simon also caught a better 'stinger' of about 7lb but it was the smooth hounds that provided the most fun, on one occasion toppling my tripod with their voracious take.
The hounds, which included some 'doubles', didn't seem fussy what they ate , taking both rag and squid with aplomb and demonstrating that , when they're 'having it', crab baits aren't strictly necessary.
We finished the session with just scraps of bait left as the tide  reached the foot of the shingle on the ebb, and the bites finally ceased.
The catch included the two stingers, ten smoothounds, school bass, dogs an undulate ray, and an eel and proved to be one of the most entertaining beach sessions I've had for years.
On subsequent trips, over the past few days, the fishing has remained consistent ' especially with the smoothounds which have provided entertainment for fishing buddies Jim, Sam and Simon who also managed another small sting ray
So, the sting ray target has finally been achieved and I although I did light heartedly mention to fellow beach 'nut' Jim that once I'd reached my target I'd probably sell my beach gear, actually, I've changed my mind and my desire to catch another sting ray , preferably something larger than my first, is very strong Indeed. If not this year, then the next.......or the next.......or the next.
Posted by Unknown at 04:25