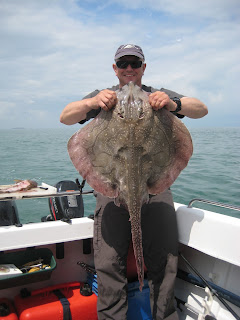 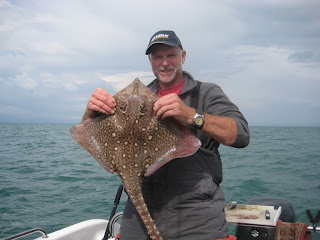 My good friend and marina neighbour Clive , along with his brother Kim, have been small boat fishing in our local 'arena' for several decades and, consequently have amassed a wealth of knowledge and understanding, and caught a few decent fish along the way too.
In my opinion, as a 'tyro', nothing is more valuable in our chosen branch of this glorious sport than 'experience' so when the opportunity to fish with someone like Clive arises, I jump at the chance , not only for the good company but for the 'snippets' of invaluable information that I tend to pick up. What Clive doesn't realise, is that when I get back home , I hastily jot things down in my little black note book which is often consulted to plan and execute subsequent forays afloat and has indeed proved to be a very useful tool.
Clive learned much of his 'trade' from one of our port's most famous anglers-Dutton Everington. Dutton was a very prominent charter skipper in the sixties and seventies often appearing in, and writing articles for contemporary magazines  such as 'Angling'- a very high quality publication which also regularly featured material by the likes of Darling, Gammon and Gibbinson and was aimed at the 'allround' angler- perhaps a more common 'specie' at that time.
Sadly,I doubt very much whether nowadays such a magazine could succeed primarily because of the internet,  which gives such convenient and instant access to the written word, but also because it appears to me that 'angling' has become a much more 'specialised' pursuit with most anglers concentrating on just one aspect of the sport. It's rare to find a carp angler who goes boat fishing at sea.
Clive however, is something of an 'all rounder' particularly in salt water, although I understand he's also quite useful with a trout fly rod, and I do have a cunning plan to one day, select a suitable hostelry, ply him 'ale' and write 'stuff' down as he says it. Watch this space!
Anyway, today's target was tope and Clive joined me for a trip to 'our' favourite deep mark somewhere 'out west'.
Three years ago I had some exceptional tope fishing from these marks but have struggled a little since then and this year has proved no different. I've had one or two reasonable fish to 35lb this time around, but generally the fish have been of a smaller average size. Today sport was 'consistent' but hardly spectacular with about fifteen tope to the boat to 'upper teen' size. Clive had a nice undulate ray of 15lb, and I had a 9lb thornback to punctuate proceedings but generally the fishing was slower in comparison to previous sessions. We moved the boat a couple of times seeking an improvement in sport,but this proved to be mostly unsuccessful.
As I've found on past trips, once the tide flooded hard anchoring became a little difficult and we were forced to end proceedings slightly earlier than originally planned.Whatever the case it was still an enjoyable day afloat in good company and I will look forward to future runs out with Clive.
I always feel the tope 'season' passes by far too quickly and whether I'll get another crack at these worthy adversaries this year remains to be seen- I hope so because there is a very real chance of connecting with something 'special' in these waters.
﻿
Posted by Unknown at 05:17