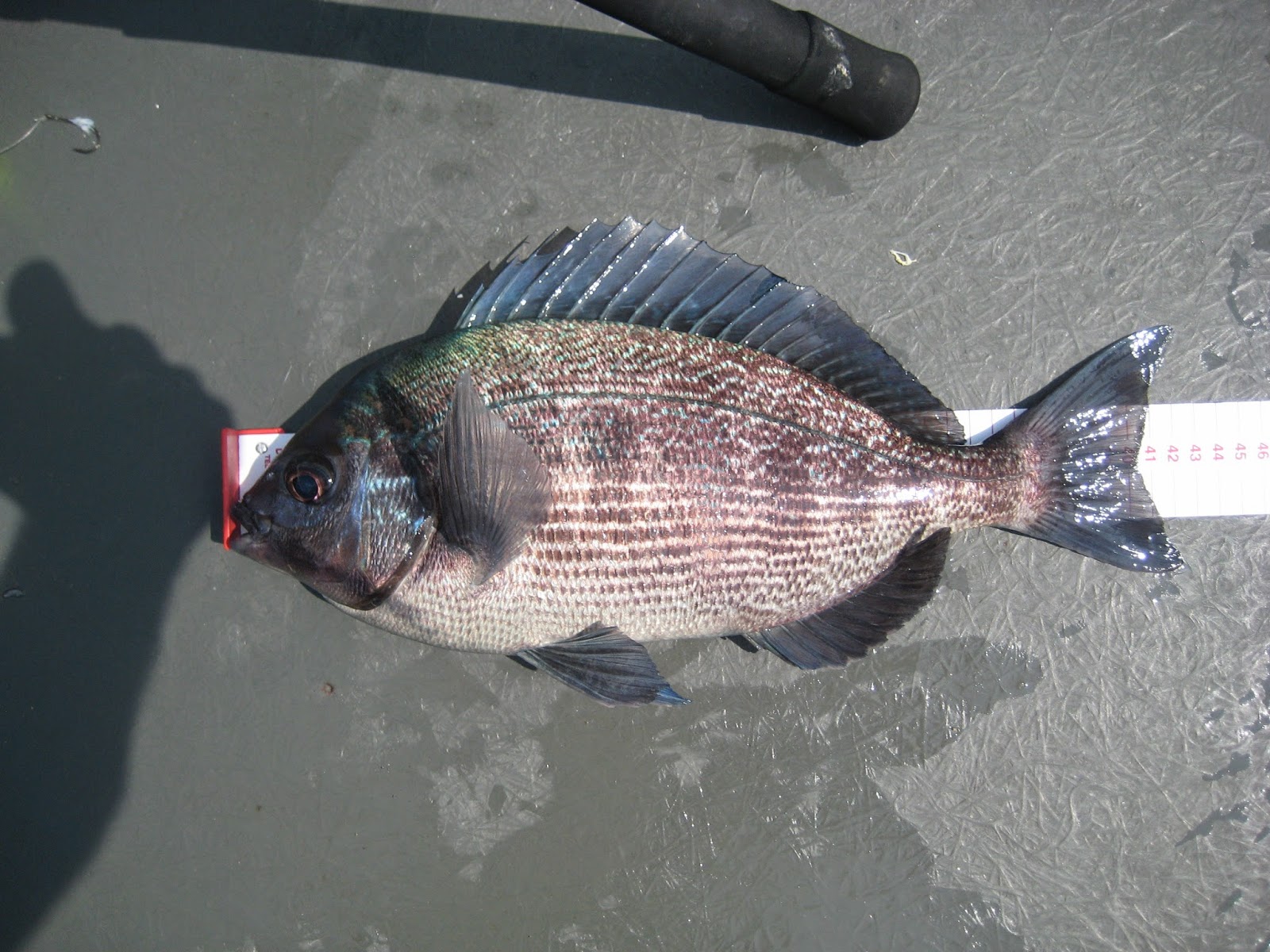 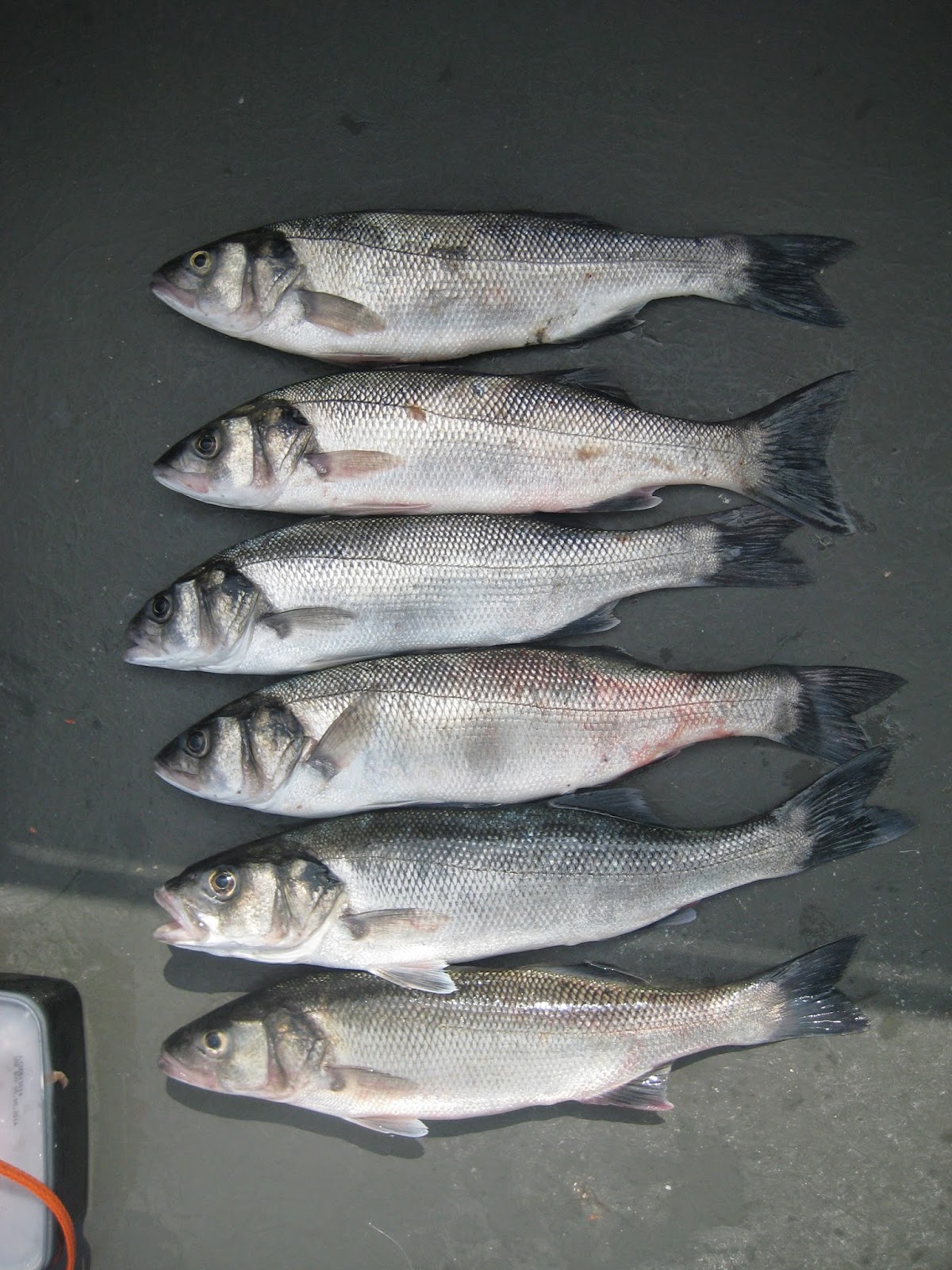 I left the mooring about 6 a.m for this one on a very still morning and headed straight for one of my favourite reef marks with lure rods at the ready. With no other boats even out of the port , I had the sea to myself-perfect bass hunting conditions.
On arriving at the mark it was plainly obvious that the bass were indeed present , as the bird activity was 'manic' and the sounder particularly busy.I started off fishing a soft plastic swat shad vertically and it was a fish a drop from the start, averaging about 2-4lb.
Every now and again the surface of the sea would erupt as the huge shoals hit the surface, the birds giving away the exact location, signalling me to approach with 'stealth' and break out the surface plugs.
Using a 'walk the dog' patchinko, the action was again 'fast and furious' with the lure sometimes barely moving a yard or two before being savagely hit by the bass. Interestingly when I changed lures to a 'skitterpop' they seemed to show less interest although I did still hit a few.
All this went on for a couple of hours as I continually drifted the mark and held on to the massive shoals losing count at around 50 bass boated-fantastic fishing indeed.
Eventually another boat showed up following my drifts and, for a while at least, I continued to catch but, as the wind began to pick up and the tide dropped, the action waned and I decided to drop the pick and fish with baits.
Planting myself on the edge of reef #6 having picked up some welcome mackerel baits on the way it was, once again, a bite a drop. Three double figure undulates, a thornback and a couple of tope showed in a short space of time keeping me occupied to say the least even though I was hoping for a bit of a rest after the hectic morning I'd had thus far.
Occasionally we( there were two other boats on the mark) became shrouded by thick fog which enforced an eerie silence broken only by the splashing of those surfacing bass shoals somewhere in the murk.
Another move resulted in dropping the anchor at the, very snaggy 'lump' at mark #9, a mark I've not fished at anchor before. Bream were on the menu and some very good ones too with the one pictured above at 3lb the best of the session and kept for my old mate Ted Overington who was fishing nearby and wanted a nice one for tea. Some nifty work passing the fish from boat to boat in the landing net saw to that.
An excellent days fishing all told and one that I'm unlikely to forget mostly ,of course , for the bassing as It's a rare thing to immediately stumble across a good shoal like that.
I'm no great bass angler but I have two very good friends at the marina who do very well indeed with them ( as they do with other species too)
Having bass fished with both of them it's clear to me that there are no secrets to their success, no special marks or methods, just an intimate knowledge built up over years of where the bass 'could' be found. The rest is down to patience and searching. Simple really.
Posted by Unknown at 08:19