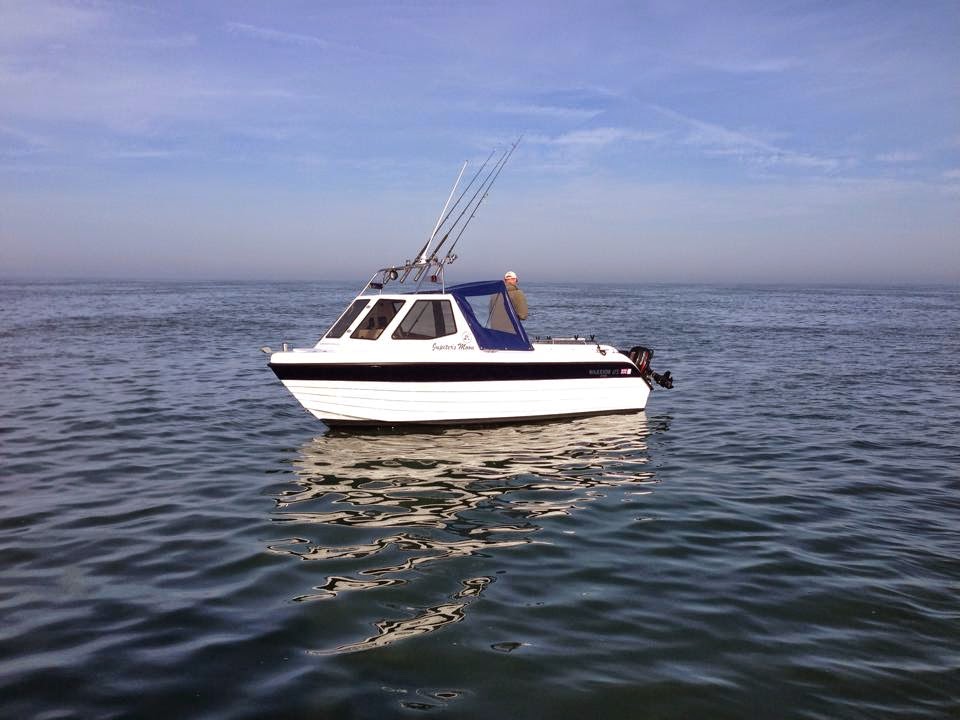 I've not been out fishing for a whole two weeks since the last day of the coarse fishing season and have been getting quite 'jittery'. I'm not really fired up by the still water trout fishing that is very popular among my fishing buddies and don't play golf but have not been idle during this time.
The aforementioned trout fishery, a local establishment, kindly collect and salt down any casualties, off cuts and discarded fishy mess that accumulates on the premises and store them for me in one of those sixty litre chemical drums with a sealed lid.
When its full, I get a phone call and, for the very reasonable exchange rate of a few bottles of 'Hobgoblin' and 'Hoegaarden', gratefully received I might add, I acquire a not inconsiderable quantity of prime shark chum.
The advantage of this exceptionally oily ,pellet fed 'trout' (I certainly wouldn't eat them myself) has been well documented in last year's shark fishing entries but, although extremely convenient, it does require some considerable effort to get it to the stage where it's usable in the chum bucket.
The process of 'processing' this putrid ,oily mess has, in the past, taken me up to a whole day for each drum load,as it has to be 'minced' by hand passing it through one of those cast iron table top devices that everybody's mum had in the 1960s. Bringing myself well and truly into the twenty first century, I decided to purchase a garden mulcher (electric-Black and decker) for the vast sum of fifteen quid-second hand from 'evilbay'.
Although still extremely messy, and perhaps not quite so 'refined', but good enough, the 'process' was reduced in time to about an hour to get to 'neat' base mix, to which bran and even more trout oil will be added at a later date. Because the trout is salted, it is simply sealed in  buckets, and left outside. Bringing it anywhere near the house would result in instant divorce proceedings.
I  have some mix left over from last year that is still in fine condition, in a manner of speaking, so it seems to keep well .
The drum and bucket of salt have already been returned to the trout fishery for the next load. Fifteen quid well spent. 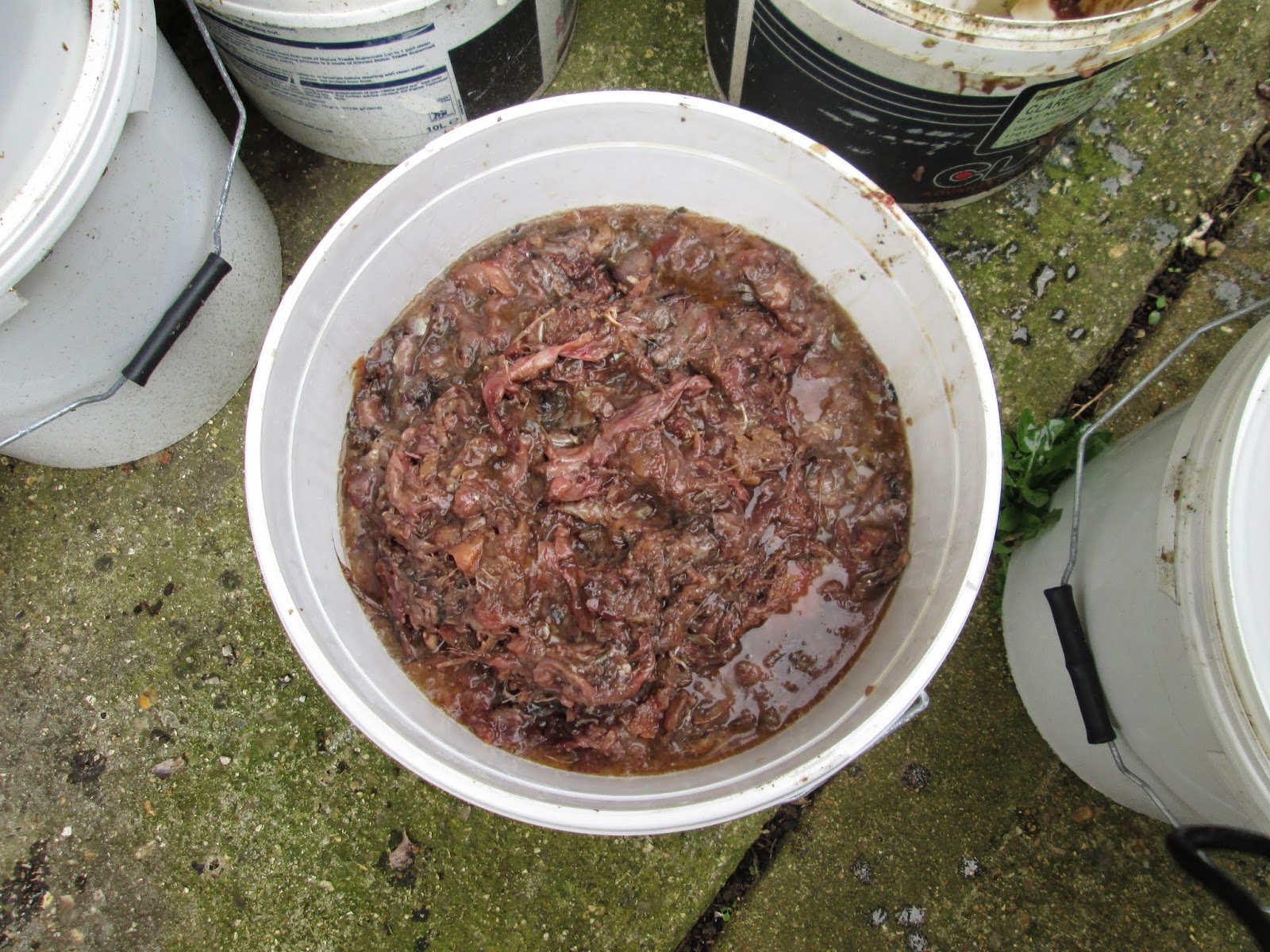 I've also been designing and making my own soft plastic lures for the bass, wrasse and pollack that start to appear on our inshore reefs at this time of year.Actually, its entirely possible that the wrasse are resident all year round but poor water clarity has hindered fishing for them.
This process involves fashioning a blank in modelling clay which is then baked in an oven making it hard and suitable to take a mould from.
The mould is  cast in room temperature vulcanising silicone and then plastic , melted in a microwave( not the one in the kitchen as this again could result in serious marital issues) is poured in, allowed to cool and 'hey presto' you've got your lure.
I came up with two designs based on lures that I had been using, and having success with on reef trips last year ;A four and a half inch split belly shad based around a 3/0 worm hook that will be texas rigged to avoid, or try to avoid, snagging., and a wormy, grubby type 'thing' that will be specifically used for wrasse again based on the same Nogales worm hook.
At the moment I'm using drilled egg weights held in place with silicone rig stops for jig heads in weights up to 3oz but will be looking to cast my own articulated heads similar to those produced under the 'Canelle' name. 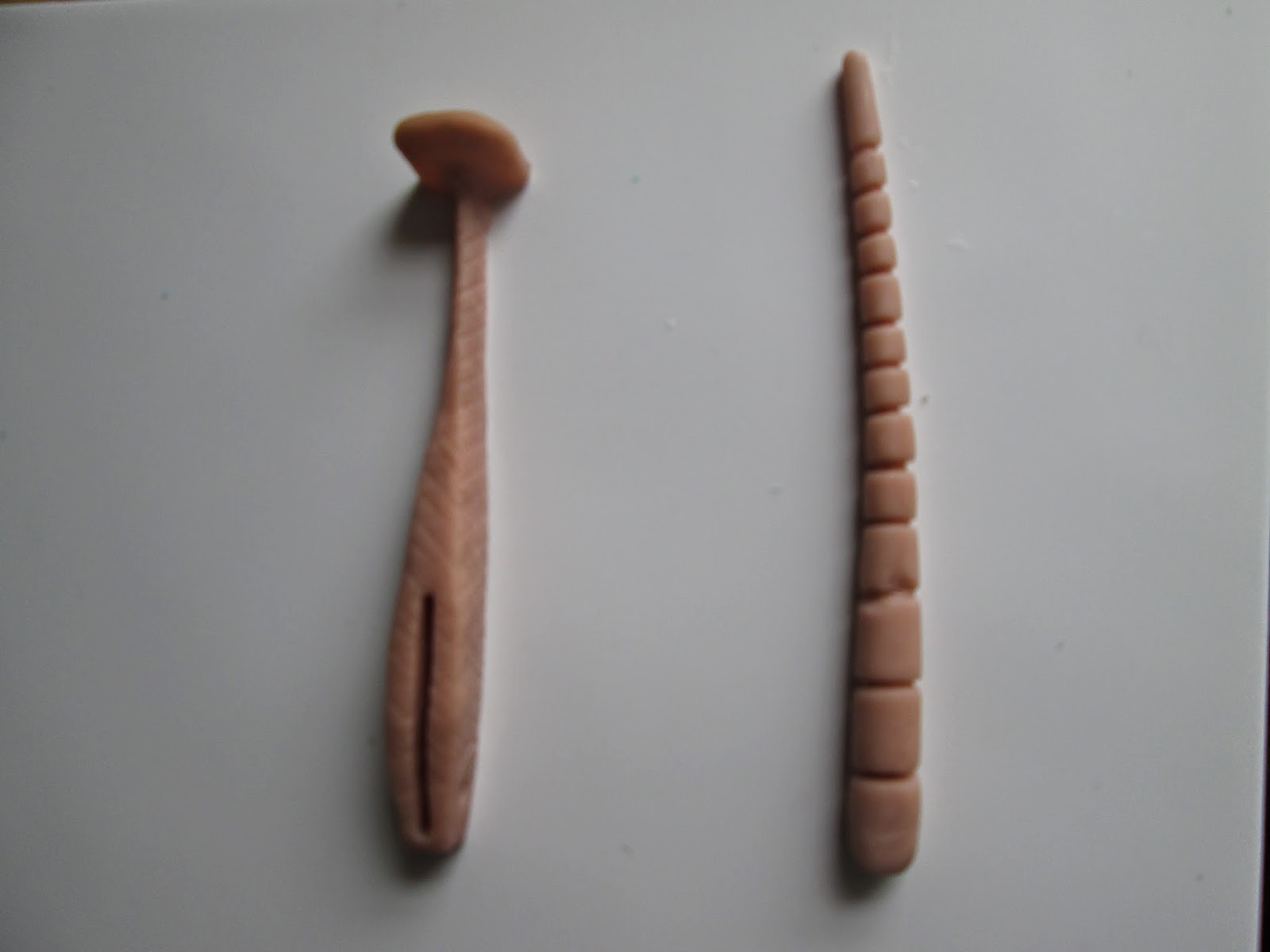 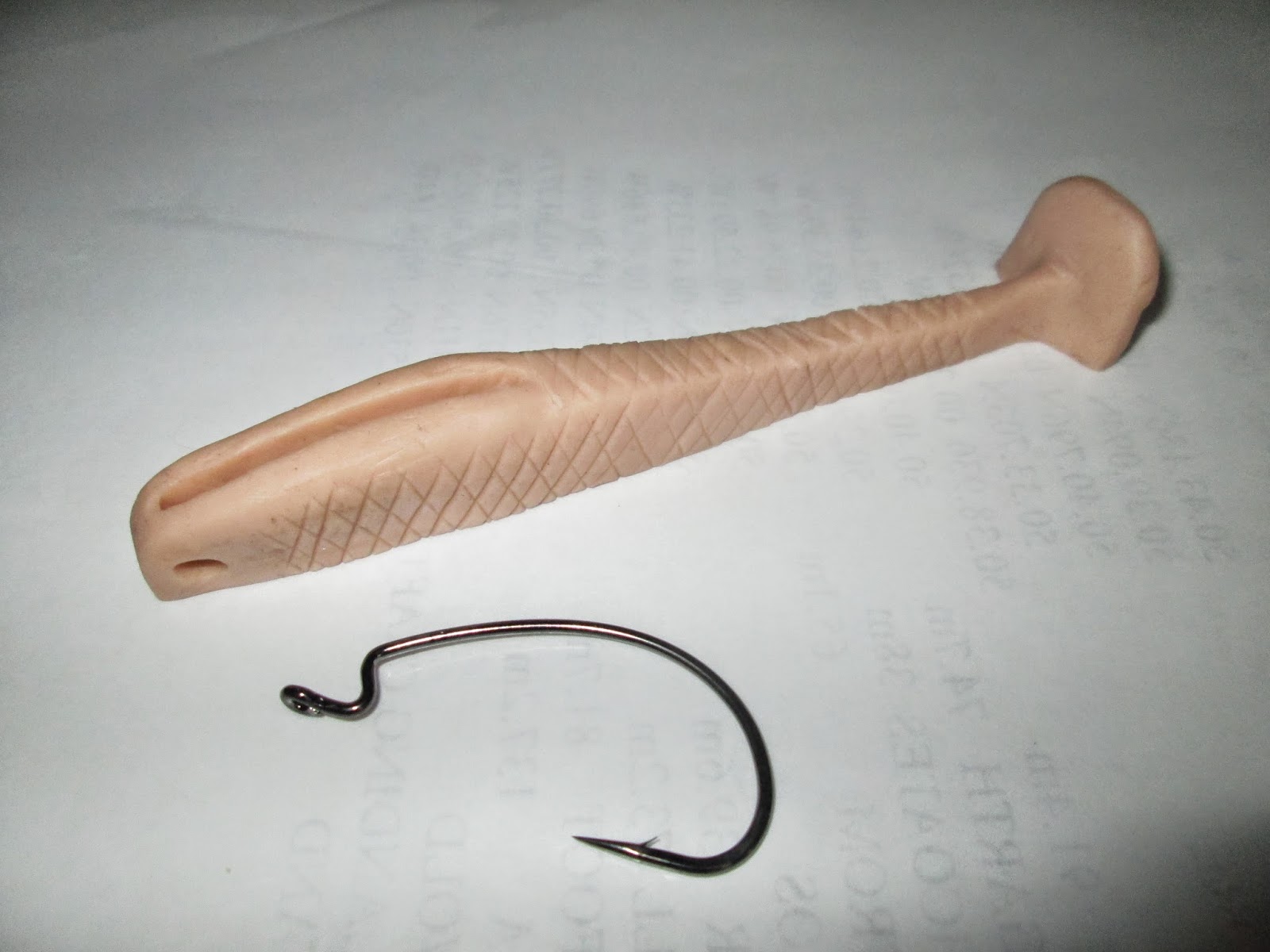 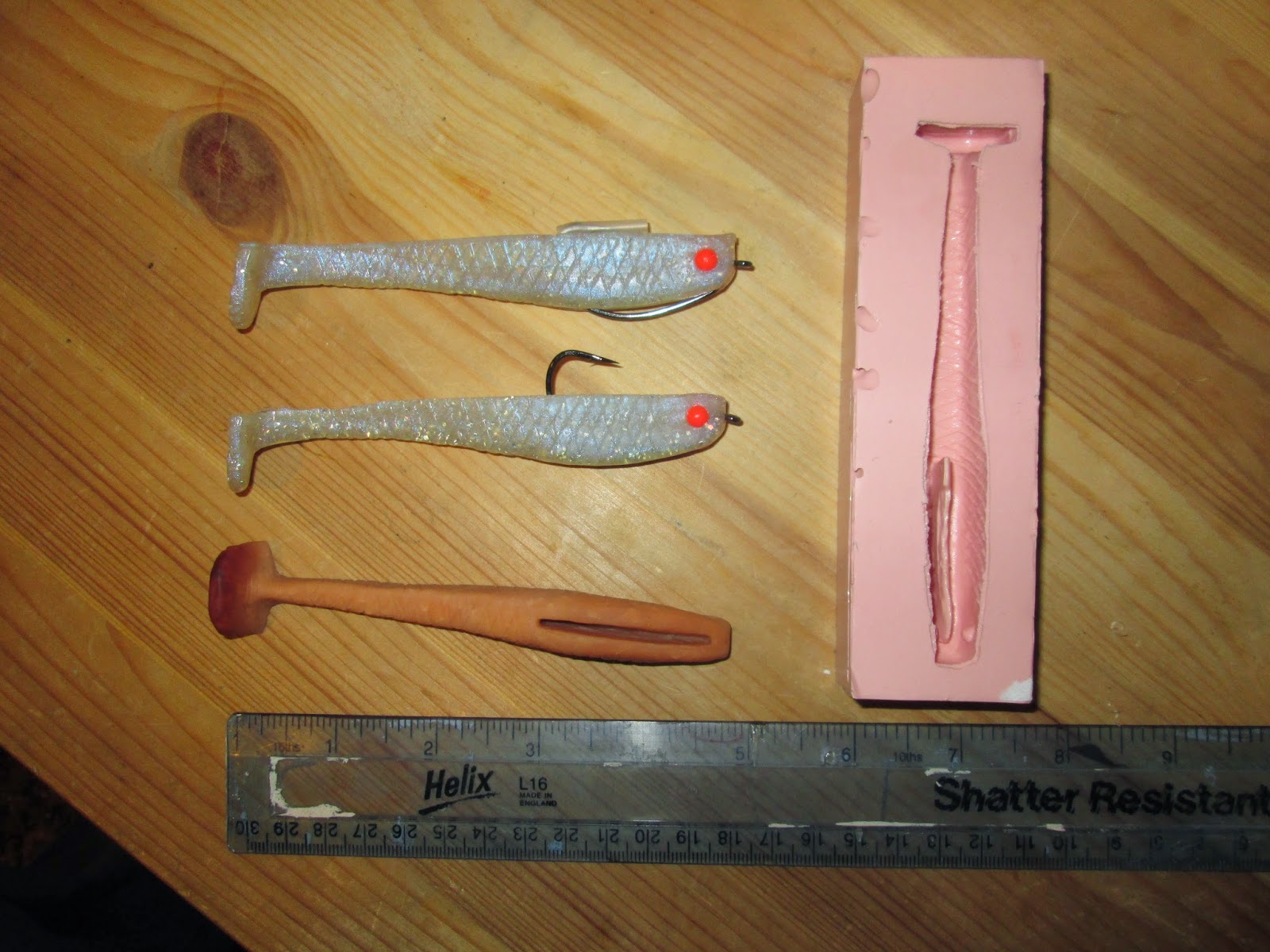 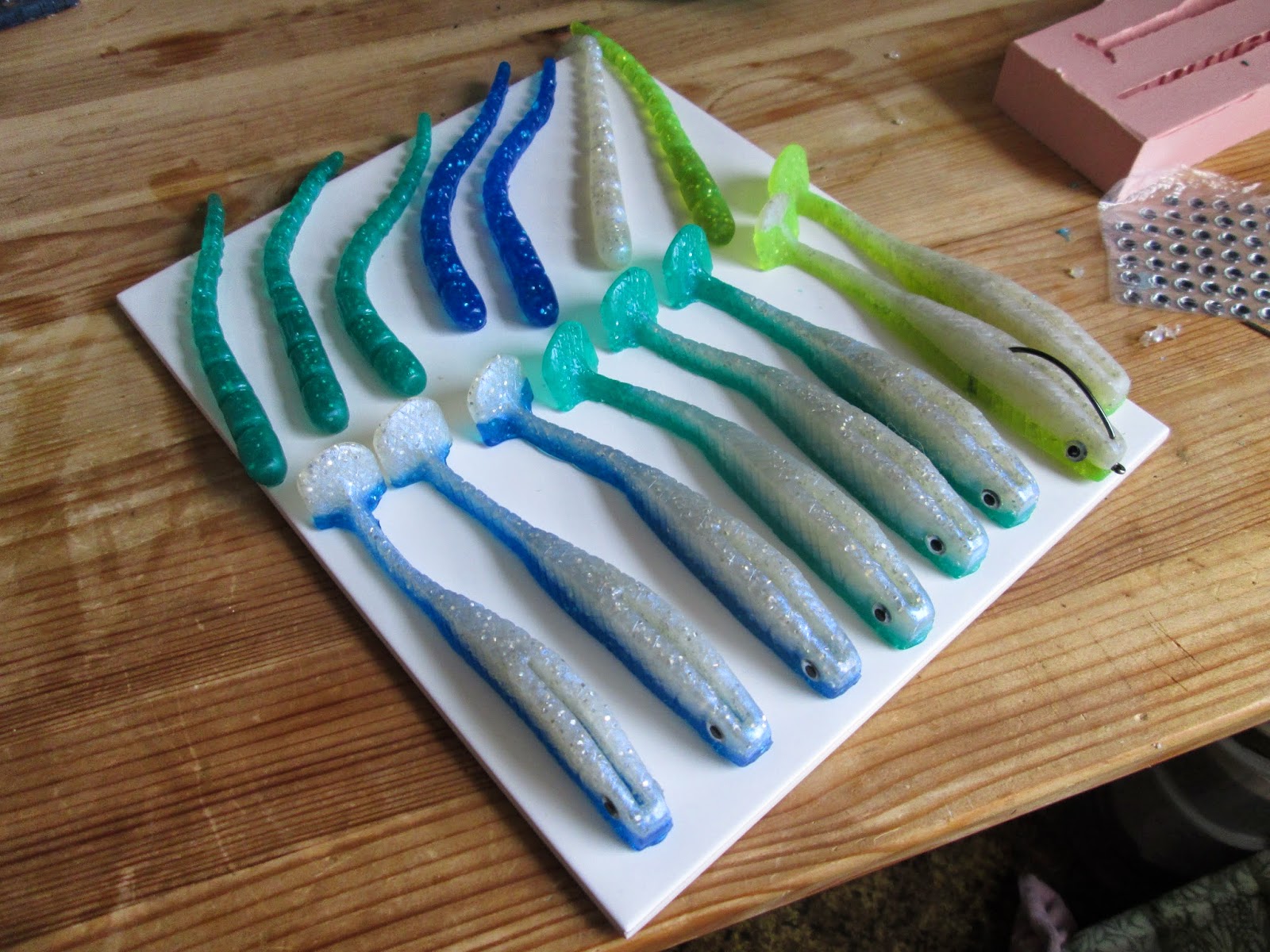 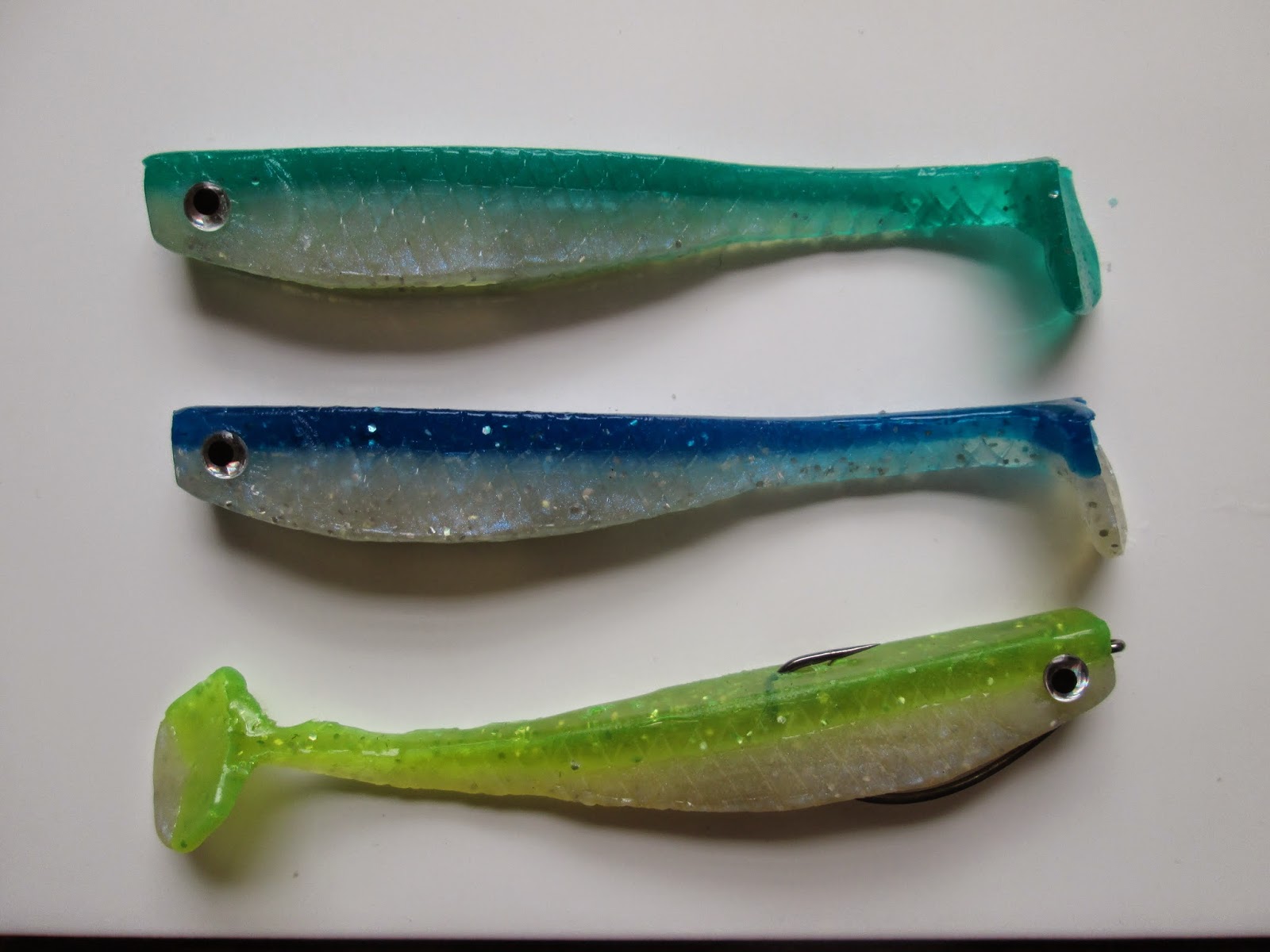 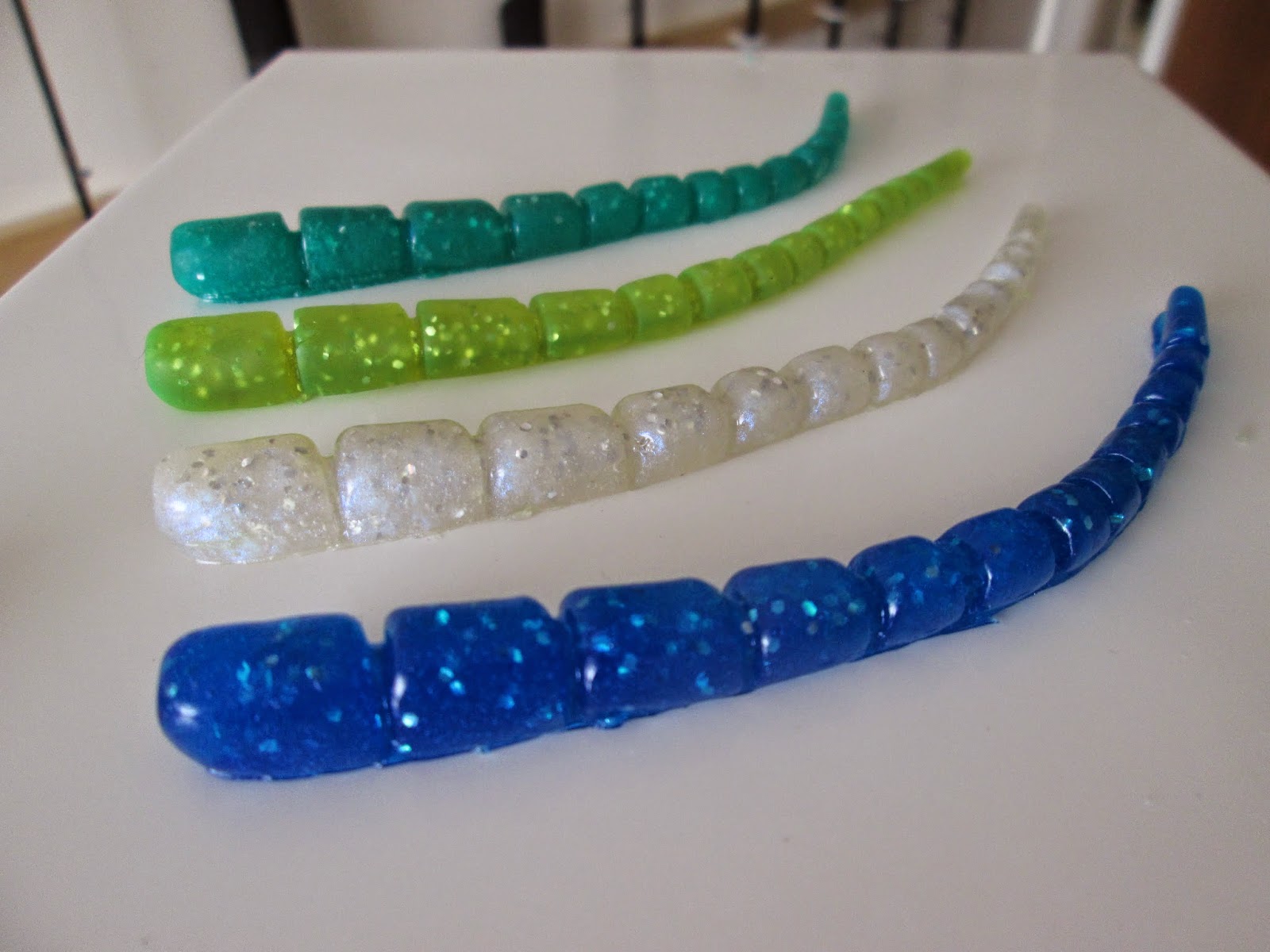 If I may be permitted to say so myself, I'm quite pleased with the results and, after a bit of tweaking the lures seemed to show a nice 'action'  when tested in the wife's goldfish pond.  So to get fishing.
The water quality at sea has been very poor of late due to the rough weather,and to use lures successfully, one needs clarity. On the first trip out in the boat I went in search of this clarity on the reef marks at 7 and 9 but failed to find it, and any fish.
In the end I settled at anchor and fished small baits in the hope of an early bream but could only manage dogs and whiting to save the blank before having to return to port early to catch the tide.      One of my bassing mates however had no such restrictions and, after working extremely hard and staying out over the low tide 'lock out' into darkness did eventually find some fish in clearer water and passed on the numbers to me. They were mostly small bass but with one exceptional 'clonker' in the catch-a stunning eleven pounder.
When I checked the co-ordinates on the paper chart at home, I recognised the mark (31)which unsurprisingly has 'previous' form. I wonder why the bass return to these marks year after year-a great mystery.
I couldn't get out early the next day but, another mate, Pete, running a small open boat the fair distance over from an Aldwick beach launch could, and also had the mark information. The text the next morning said it all. 'They're having it mate, get yourself out here' .
By the time I'd got myself sorted, the mark had been 'blown' and plenty of boats were in residence but, It didn't matter as we were all friendly(mostly mates anyway) , well mannered in our drifts and all catching bass- some decent ones too with my best being between 6-7lb but others getting some better fish in the mix. Most important of all though was that my home brewed plastics were working a treat, not only on the bass , but a hard fighting 4lb 8oz 'pig' also showed up punching well above its weight indeed. Much derided by so many on our local  patch, usually  those somewhat 'blinded' by bass and in some cases it's commercial 'value', the wrasse is a much underestimated adversary that, in my opinion, is a far more sporting fish than the handsome 'Mr Silver'

Gradually the boats dwindled as the afternoon wore on  until it was just me and another Warrior 175 with Newhaven markings left on the mark- a commercial rod and line bass boat. I've heard about these chaps who travel over to work our local reefs , but have never actually come across them before at sea.
Watching this guy at work was fascinating. As the tide slowed my lures became less and less effective but float fishing two, or sometimes three live baits (tank stored pouting caught last autumn) this guy just continued to hammer the bass out and they weren't small either- the live baits selecting the bigger fish, or is it the other way around. Sometimes, he had two or even three bass on at once and I didn't see him fail to catch on any drift.
In the end we engaged in conversation  and I probably learned more chatting to this friendly professional in ten minutes than I would in ten trips out fishing.
O.K he's taking everything he catches and may not be very popular among local anglers but, he's doing it for a living, is working exceptionally hard and I'd much rather see this 'selective' commercial fishing than the 'pair trawlers' any time. Meeting this chap has certainly changed my opinion of the small boat commercial fishing sector and it certainly illustrates the effectiveness of live bait when targeting bass. A thoroughly enjoyable and productive day's fishing.
Two days later and I returned again to the same mark and this time, I had it to myself apart from a different commercial Warrior, another 175 from Shoreham, who seemed to be searching the general area with his floats.
Nothing showed on the first few drifts  and as Neil called me up on the radio to announce his imminent arrival, I decided to stick around to see what would occur.
What did occur was probably the most frustrating single event that I've ever experienced in my fishing career but, at the same time , yet another invaluable lesson.
Neil had a crew of six, all fishing metal stingers with  a sand eel teaser attached to each trace. No sooner had he arrived, on virtually the same drift as me, than he started to hammer the bass, where as I couldn't even buy a bite. '
Mostly , they were small but that's not the point. Every single drift produced fish after fish with Mick in particular absolutely 'mullering' them  . Even changing my rig to match Neil's crew and copying their technique (I was that close) didn't work, nothing was hitting my lures, where as Neil's 'shoal' was getting pummelled by the bass.

Once he'd had a hundred, he stopped , as his crew were electing to keep the fish and he felt he couldn't justify continuing-forward thinking. In this time, I'd caught just two bass.!!!
Feeling totally deflated but more to the point, confused because I was absolutely one hundred percent sure I wasn't doing anything wrong, Neil suggested a possible solution.
With up to twelve lures in the water under his boat the bass were attracted by the 'commotion' and the catching of fish probably just added to the attraction. Its possible that they actually followed his boat  around and to me, this is exactly what it looked like, but it was still excellent skippering and shows why he and Mick are such a well respected team.
Once 'Spirit' had left I felt I was in with a shout but it wasn't to be. They just seemed to disappear into thin air and my only catch before returning home was one solitary Pollack. A hard pill to swallow but once again, so much learned, and to think about for future sessions on lures. I'd failed miserably yet gained so much  and returned to port with my tail well and truly between my legs. However, such is the way with fishing that by the time I reached my mooring, my mood had lifted and I was already planning my next assault.
As a footnote , plaice in good numbers are showing on marks near #48. Shaun had reported good numbers in his nets as passed the info on to the 'big three' charter boats and I understand that Steve on Jennifer's Pride has picked some good ones up to 4lb. Of more interest to me, is that they are also being plagued by pin whiting-perfect size for bass live bait. Knowledge is everything.
Posted by Unknown at 15:02