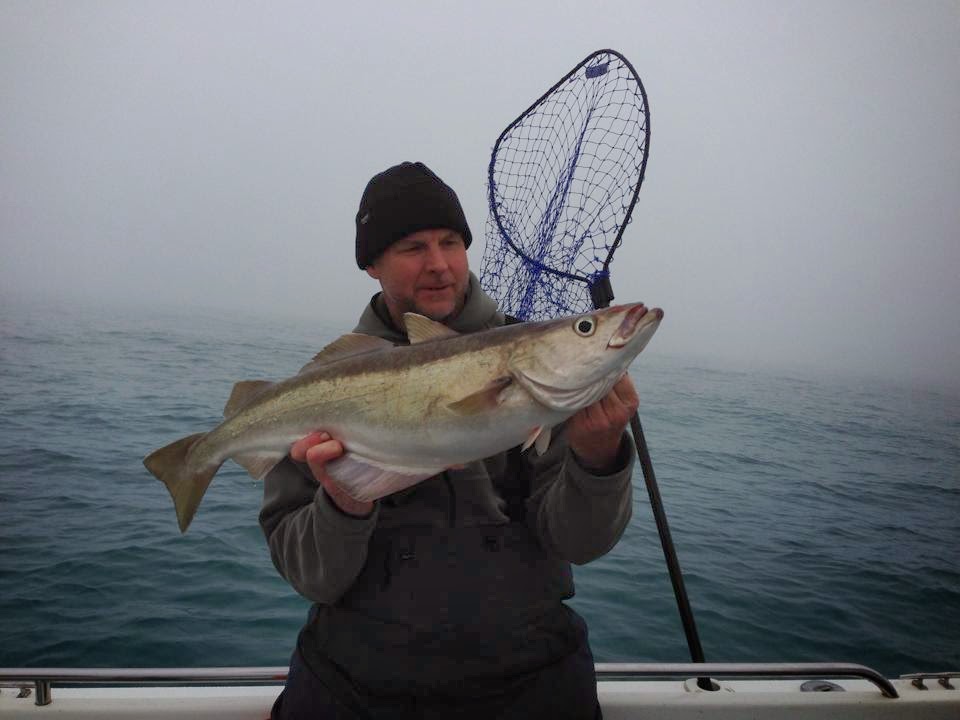 A simply fantastic days wrecking aboard marina mates',  father and son team ,Tony and Martin's superb diesel powered 24 ft Flyer 'Cap'n Cod'.
Out of choice, I don't do a great deal of wreck fishing from my own craft simply because I have no outlet for the catch, and pollack and bass from the depths just do not 'go back'.
These chaps have plenty of mouths to feed , are incredibly skilled at their craft and it showed up in todays phenomenal catch of hard fighting fish to 17lb- we soon lost count of how many came on board.
I've absolutely no idea where we were nor, as its considered 'bad form', asked what wrecks we fished but, we must have travelled nearly a 100 miles in total taking fish from every site we targeted, many with a French accent, and on a variety of different lures of varying colours and sizes-it didn't seem to matter.
Highlight for me was, swapping the normal wrecking rod for my tiny 6ft bait caster set up and battling a pollack from 90ft of depth forcing a ridiculous curve into the little 'stick' .
As you can see from the picture, it was foggy out there all day and thank goodness 'Cap'n Cod' has radar on board because at one point, I was actually looking UP at a huge ship that emerged out of the 'murk' and passed us by a little too close for comfort, and having given no warning signal.
They were probably running on auto pilot and not watching their own radar. Luckily Martin had spotted the 'offender' on the screen and taken evasive action otherwise I might not have been here typing this.
Rather fittingly, the marauder's name was that of my other half- 'Janet'. Perhaps she's trying to tell me something.
Posted by Unknown at 09:48