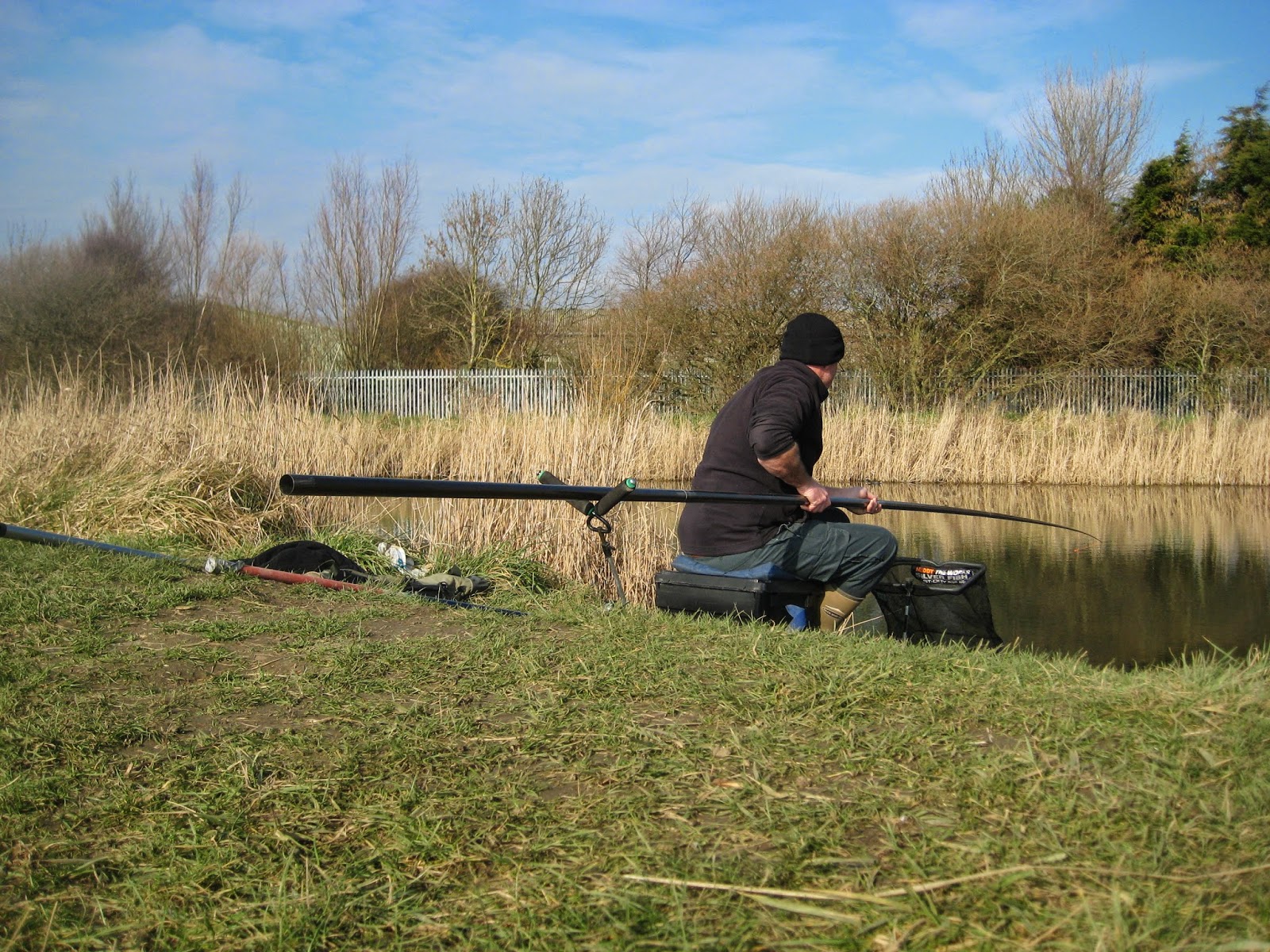 In complete contrast to yesterday's wrecking i decided sample the other extreme of the angling spectrum today, and persevere with some pole fishing for a couple of hours , making the most of the unseasonably fine weather. On my last trip to the pond, I found the pole a little cumbersome to use, and thought it of little advantage to standard rod and line gear, but I've always admired the simplicity and finesse of the method, and thought it deserved a little more application.

When i was a youngster, Ray Mumford-a famous 70's match angler gave a talk on the method at my local angling club in Leatherhead, Surrey. At the time very few British anglers used poles, although they had been  popular, albeit in a bamboo form, with Thames roach fishermen for many decades. Fascinated by Ray's presentation, I decided to save my pocket money and buy a pole-an 18ft fibreglass Shakespeare model with an alloy crook that weighed a ton. I did fish quite successfully with it and not just for tiddlers. I remember a 3lb chub from the Mole giving me quite a hard time although it was successfully landed.
Of course, nowadays poles are a common sight, and not just among match anglers. My coarse angling friend Paul uses his quite successfully on the Arun for roach and bream fishing. Mine is a very cheap model borrowed from Dave and is a world apart from my old 'Shakey' being comparatively light and stiff. I tend not to use it at full length at the moment, but on this pond there is really no need.
Because of the still conditions, I changed tactics slightly today by dispensing with the bait cup, and feeding both crumb ground bait and maggots by hand and still keep the feed in a tight area of about a square meter. Things took a while to get going but, once I'd got the fish on the feed, it was a bite every cast, and my hit rate was, i reckon about 90%. The results were very good and after only about three hours of fun fishing, I'd amassed a nice bag of 40 odd fish, mostly roach in the 4oz-8oz bracket with a couple of perch and a rather tatty 1lb 4oz rudd.
Once I'd got my pitch sorted and  myself comfortable with everything in easy reach from my perch, I found the pole much easier to use, and it was definitely more effective at hitting the shy roach bites, but I don't think for one minute that I'd ever become a threat to the local match angling community.
Interestingly, the roach were very wary of white maggots, ignoring them whenever i tried them on the hook even though they were in the feed. Nearly all fish came to reds and I'm sure if I'd had casters, I'd have done even better. The brown crumb seems to have been very effective at bringing the fish in.
Unfortunately, or fortunately depending on how you look at it, there were only a couple of 'pike bait' sized tiddlers in the catch, and it remains a mystery why smaller fish don't show up more often.