True crucian carp are something of a rarity nowadays and a specie that I haven't personally tangled with for several decades. As a youngster I fished a small Surrey estate lake that contained a head of crucians and also various hybrids never catching anything over about a pound in weight but, what sticks firmly in my memory is just how delicate their bites were and how tricky they were to hook.
In those days I adopted traditional (they were the norm back then ) float fishing methods and I don't recall the method feeder, nor bolt rig having been even  invented.
Nowadays it seems, that most coarse species can be caught efficiently on bolt feeder tactics of one sort or another and there is no doubting the efficiency of the method although at times, I still prefer to watch a float.
Marsh farm fishery near Godalming has a stock of genuine crucian carp and so Dave and me decided to have a go at catching them as well as some of the tench that are present in the lakes.
Dave managed to bag a couple of crucians on his swing tip outfit, whilst my feeder rigs produced just the one of about a pound along with half a dozen tench to 5lb or so making for a pleasant day's fishing. 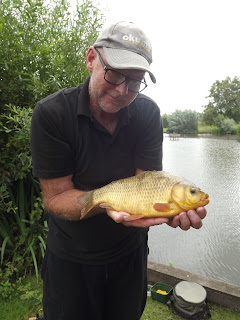 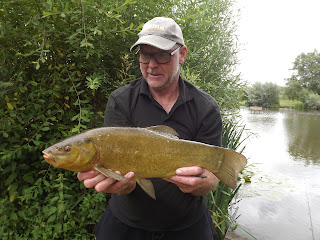