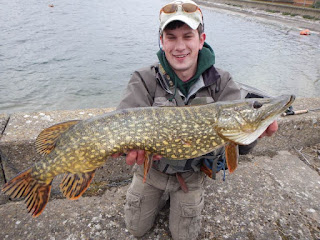 A trip to Farmoor reservoir in Oxfordshire in an attempt to snag some pike on fly fishing tactics with Clive Hodges  and Tom Cosford. Young Tom's been doing quite well on this venue of late catching some spectacular pike on the method , unsurprisingly judging by the competency he displays with his casting.
With some superb gear borrowed from Dave, and despite being my first attempt,I was secretly quite pleased with how well I managed to send the fly out although perhaps , it should be more appropriately named a lure. In this case one of Tom's home brewed concoctions which has served him well.
We did see plenty of pike skulking in the shallows, which in itself fascinated me, but they weren't the slightest bit interested in what we sent passed them.
After thrashing the water all day long, Clive and me left it to Tom to show us the way, and finally secure a fish to save the day, the beautifully marked specimen above. Well done that man.
I'm not sure the method would be suitable on my own favourite river although, it has proved its worth on neighbouring venues of a similar nature however, I did enjoy the experience and will have a bash again sometime.
Posted by Unknown at 03:04