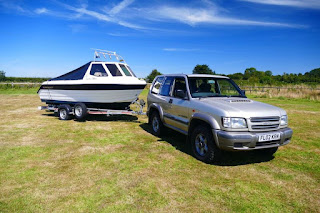 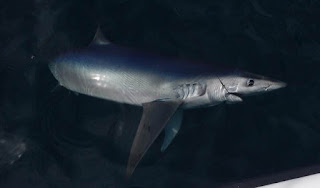 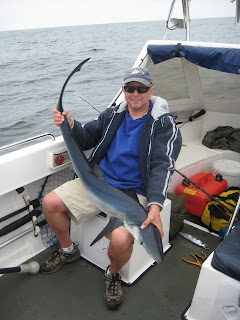 Small enough to come on board 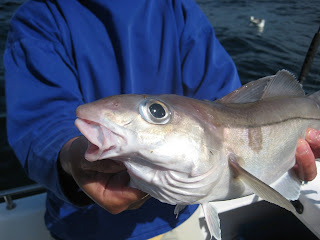 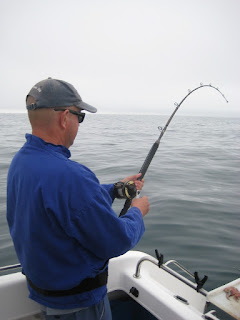 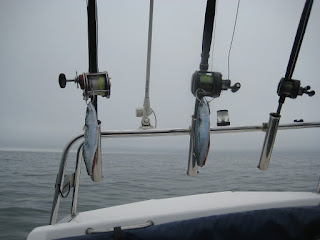 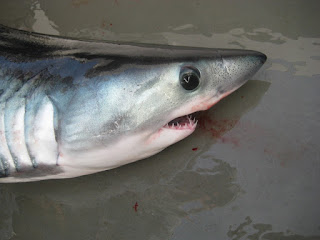 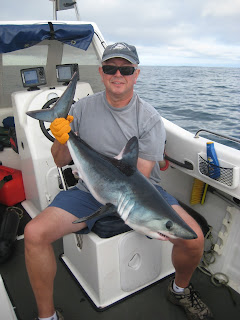 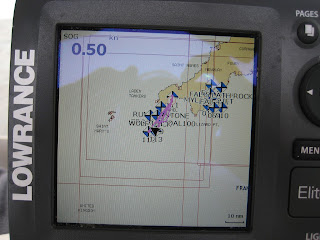 We 'pushed out' a bit 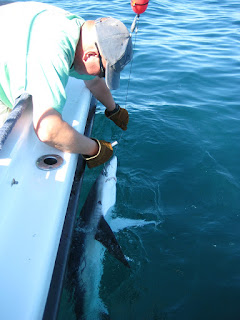 Clive mastering the release.
By far my most productive  shark excursion to date with thirty two blues and a bonus porbeagle coming to the boat over the three days fishing. Five of the blues were estimated to top the 'ton' mark with one exceptional fish, and the average size was quite high with very few small specimens.
The final day produced fifteen good shark, which is a boat record, and at times the fishing was hectic enough for us both to stop fishing, and take a 'breather'. These figures may not be that special compared to the results of professional skippers operating in the locale, which quite frankly at times, can be quite stunning. But that's not the point. For two visiting anglers in a small boat there was more than enough fun to be had.
Clive Hodges, who accompanied me on this trip, is an expert small boat angler with several decades of experience fishing our local Sussex waters, and is also something of a legend among bass anglers.  However , apart from the odd charter trip, he'd done very little shark fishing and had expressed an interest in joining me earlier in the year with a view to topping up his 2016 species list which he certainly succeeded in doing.
Both blue and porbeagle shark were added to his list on this trip,along with a haddock caught on a bottom bait. At the time of writing I believe Clive has reached  fifty four different U.K salt water species for the year, which is quite an achievement.
Interestingly, despite drifting in over 300ft of water Clive , who was also fishing a bottom bait whilst waiting for the shark floats to disappear, managed to also catch plenty of bait sized whiting. A recent article by Dave Lewis in Sea Angler magazine has cited these fish as excellent blue shark bait. We did struggle at times to find fresh mackerel for bait, having to rely on the frozen alternative, little realising that we were feeding the gulls on suitable blue shark faire. Food for thought for future trips.
The winds were kind enough to allow us to 'push out' quite a bit further than usual on the second and third days and this, I believe, is the main reason why more fish than my usual tally came to the boat. The porbeagle, a very cute little specimen which I just managed to squeeze into a landing net, was a tremendous bonus. They occasionally show up mixed in with the blue shark in this area, particularly later in the season, although are rarely caught to the sort of size you would expect on more traditional marks such as reefs or wrecks.
Overall the trip was a great success confirmed by Clive's request to join me again on a future foray. Unfortunately time is quickly running out for another run this year but I suspect I'll be returning to Penzance a few more times before seeking alternative shark venues to visit.
﻿
Posted by Unknown at 10:45