As the current pike fishing  has been a bit lacklustre, to say the least, I fancied a bit of a change and decided to target some roach in a couple of afternoon/evening sessions.
The river seems to have a very healthy population of roach and whilst they probably don't reach the size of some of the famous southern chalk stream fish, a pound plus fish is a worthy target in my book and these seem to turn up quite regularly and  provide challenging fishing. I have heard of fish caught recently, from reliable sources approaching double this weight and I think a two pounder is certainly not out of the question and would indeed make a wonderful capture.
A good friend of mine , Steve Lucas caught a  huge roach of 3lb 1oz in the mid eighties winning him an Angling Times prize and matches, held on the lower reaches of the river in the same era, often produced high quality fish. Nobody knows if they still exist.
My two trips were fished on comparatively large tides, which are usually accompanied by their own specific problems such as huge quantities of floating debris in the river,  making the fishing extremely difficult at times.
My chosen roach swim is sheltered at either end by overhanging trees which, although not restricting the water flow, traps the debris rafts thus keeping the surface clear, thus allowing hassle free fishing.
The ebbing tide seems to produce much better sport and both these sessions were timed accordingly-my arrival at the boat usually being at the top of the tide and the ebb well underway once fishing commenced.
Chosen method is feeder fishing with bread flake on a size 10 hook, and liquidised as ground bait either moulded around a small frame feeder, or stuffed in a similar sized cage.
Bread does seem to pick out the better roach although smaller fish are often felt nipping at the flake whilst failing to hook up, so the bait needs regularly checking and replenishing-no bad thing in itself. These 'nuisance' bites seem to slow down as the light fades, and completely disappear after dark, allowing the better roach a chance to get in on the act.
This indeed proved to be the case on the first trip as I took a brace of 'pound plus' fish once the 'tiddlers' had switched off. A reasonable dace also put in an appearance just to add a bit of variety.
On the second trip the small fish didn't seem to be so prevalent , and a good catch of eight  roach was made from nine ounces up to an ounce over the pound- all plump fish in perfect condition.
'Not exactly monsters' I hear you say but............................................ 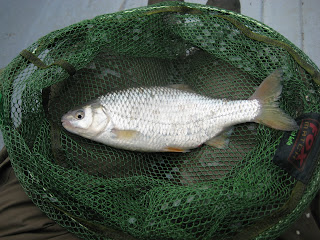 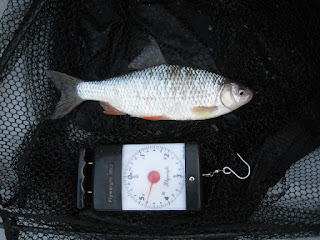