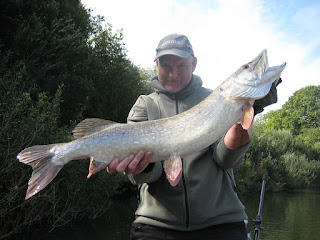 First double of the season. 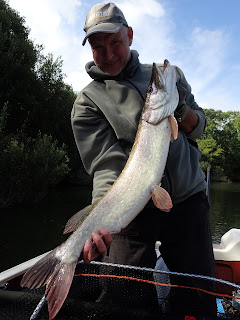 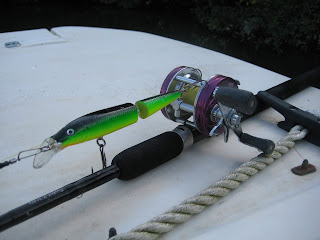 I think it's fair to say that I find pike fishing one of the most enjoyable facets of our sport. The (traditional) season is long, taking in a full five months of the year , the quarry are visually impressive, regardless of their size, and the methods used to entrap them are varied and interesting.
Whilst I agree that pike are perhaps not the most exciting of fish when it comes to fighting ability, particularly in the colder months, being our premier freshwater predator they are capable of growing to a considerable size and, personally speaking, I like to catch 'big' fish.
The sight of an upper double figure or, If I'm extremely lucky, a rare twenty pounder always takes my breath away and the Intense feeling of excitement when a big orange pike float is 'on the move' is an aspect of our sport that I hope I'll never tire of.
Every year, regular as clockwork, I relish the falling leaves of autumn and the prospect of the season's pike fishing that lay ahead.
Last year, the first spent fishing afloat, was something of a bumper season with far more, and bigger pike caught on the river than in several previous season's of bank fishing.
This week Dave and me started our campaign in earnest and, as in the norm with our tidal river pike, they proved to be something of a challenge.
We've never really cracked lure fishing on our chosen venue. Dave's devoted quite a bit more time than myself to 'artificials' with modest results,  and I can't quite seem to gain enough confidence in the method, although this could possibly be because I mostly prefer to bait fish for pike.
However, we chose a lure approach for our first day's fishing and despite covering a huge area of river had very little action-the exception being the low double above that hit a jointed diving plug.
Two subsequent trips were devoted to bait fishing, both live and dead  . The river seems to have a very healthy roach population that are comparatively easy to catch as the water is still warm, and we soon amassed enough, by fishing maggot feeders, for a day's supply.
Among the bait catch was a real rarity -a tench.
This is the first I've actually caught from the river although I've since found out that the area we fished has produced a couple this season for my match angling friend Paul Holden.
Unfortunately, apart from several dropped takes on my part which were probably small pike (I hope) the action was slow we finished with one smallish pike each. 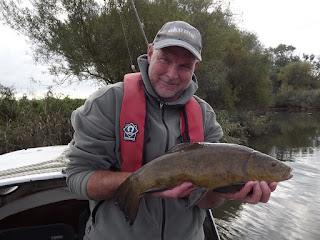 A few days  later, and Dave returned to the river with one of our mates Dave Nevatt  crewing and concentrated on fishing our 'baited' swim. A river is always capable of  producing surprises and  this 'monster' gudgeon (all of six and a half inches) showed up for Dave N......in his own words ' the best fish he has ever caught'.
The guys reported some quiet periods during the day possibly caused by pike entering the swim-something we've caught on underwater camera in the past when we've introduced feed. This indeed proved to be the case when, having dropped a pike, Dave landed this nice double on a live bait.
﻿ 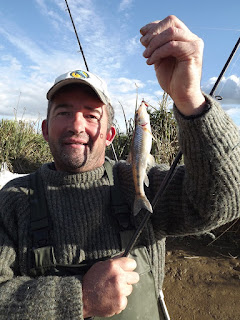 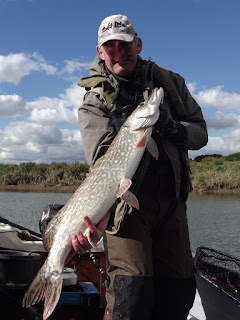 So a bit of a slow start to the season but , of course , this is just the beginning and it'll be interesting to see how things pan out over the next five months.