Although the coarse season has ended, this time of year is really the beginning of a new inshore boat fishing season and with it comes a sense of optimism. With the day's lengthening noticeably, and the clocks about to leap forward I always get a feeling of excitement thinking about what lies ahead in the coming months.
The sea boat has seen very little use over the winter due to the winds so it was great to finally be able to give her a run out especially as there would, likely as not, be some bass about.
I was up with the sparrow (almost) and headed out to the chosen reef- a mark that seems to be quite reliable at this time of year and one which tends to show the early arrivals. My intention was to spend time catching live baits but with birds working furiously over what was obviously a shoal of bass (confirmed by the sounder image) I decided to stick around a while and fish with lures for the remainder of the flood.
The Fiiish Minnow' was 'hit' on the first drop and from that point onwards I didn't look back. Most of the bass were small but changing to a bigger lure attracted a dozen or so decent fish in the five pound bracket culminating in a splendid specimen of exactly nine pounds.
Unfortunately, I'd neglected to charge the 'Go-Pro' so had to use the compact camera and the pictures are less than satisfactory.
The bites slowed as the flood ended so I tried, unsuccessfully, to drift around with some baited hokkai feathers in search of pouting. The only fish that took the bait was another small bass.!!
Surprisingly , the fishing was far less hectic on the ebb tide but, along with a brace of rather nice Pollack to six pounds, and some wrasse to just under four pounds, I ended the session with thirty five bass in total.
For most of the day I had the mark to myself  but was joined latterly by marina buddy , and fellow bass enthusiast Clive- a welcome sight who also got in on the action. Commercial bassing is banned until the end of the month so  we're making the most of the situation before they arrive and the bass are certainly around in good numbers.
The charter boys were out on a neighbouring mark and scoring well with some very creditable fish on live baits so for the time being, it's all looking pretty rosy out there. 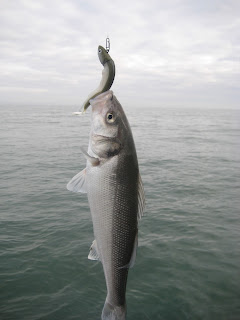 First of the season- a tiddler. 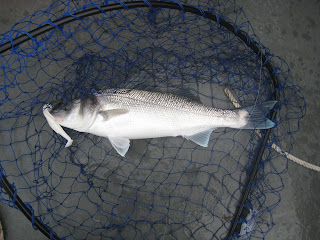 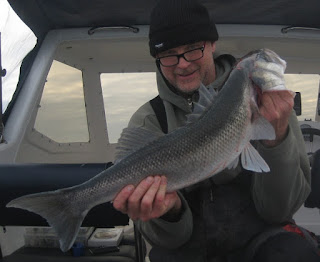 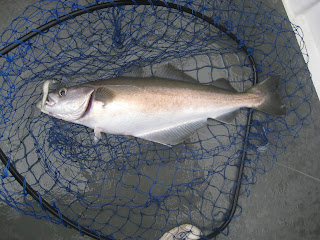 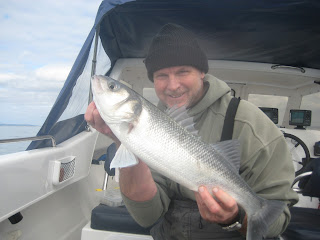 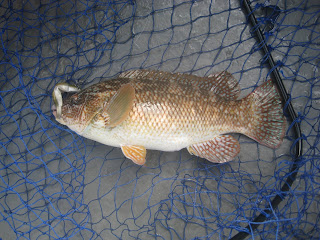 Chunky ballan.
Posted by Unknown at 03:19