As pike seasons go , the current one has already been my best by a long shot, producing many memorable days afloat on the river and today will definitely be added to that list.
I'm not usually that much of an 'early riser' but this morning, without the assistance of an alarm, I was up and about 'before the lark' and actually arrived at the boat mooring just after five a.m with the intention of taking advantage of the flooding tide to head up river.
Although Dave and me have both gained considerable geographical knowledge of the river and its associated hazards, navigating in complete darkness is still something of a challenge and my journey upstream was carried out at a 'snail's pace'.
By the time I'd arrived at the chosen area it was still too dark to see a pike float so I settled down with a cuppa and waited.
Eventually I could just see at a rod's length and just after six a.m, the first bait was sent out. Literally within minutes, the roach was taken, and the first pike of the day was boated-a fine fish of exactly 18lb.An excellent start. 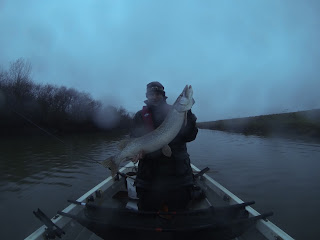 18lb
As an be seen from the murky picture, it was raining quite heavily but this didn't seem to bother the pike and within the hour, a second pike of 15lb had shown up from the same swim-again on a roach bait. 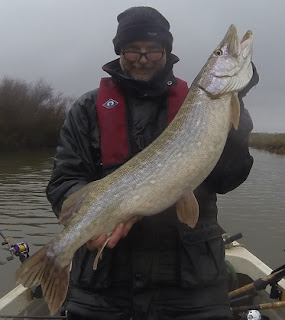 15lb
Naturally I decided to stick around a while longer but nothing more materialised so I  headed up to an area known as the 'Silent Pool'. By this time the wind had really picked up and brought with it some driving rain. The 'Pool ' lacked any real shelter so I elected not to stay too long before moving downstream to a reedy bend with some big trees on the windward bank which would offer some protection and prevent the boat being blown off its anchorage.
Placing a bait tight to a sunken tree did the trick and the third double of the day soon came out at 15lb 14oz-the photo was a complete 'washout' so I've not bothered to include it.!
Just after lunch time the rain finally stopped, and things got a bit more comfortable, so I moved swims a 100 yards or so downstream. Once again a roach bait did the trick with the final fish of the day weighing in at 14lb. 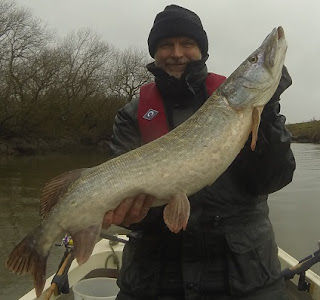 ﻿
﻿
﻿
.I like mild weather  for river pike fishing as they seem to be quite willing to feed in these conditions as has been seen so regularly this season. What's been baffling however, is the distinct lack of small pike that we're seeing and statistically, we're catching just as many double figure pike , as jacks, if not more.
Not that I'm complaining you understand.
Posted by Unknown at 09:46