It'll be interesting to see, at the end of the coarse fishing season, just how much  the river boat has been used because it certainly feels like we've both been fishing from her quite regularly.
On the 17th I ventured downstream and caught a small pike from a swim under a tree that is lower down the river than any other  previously caught pike.
On the 21st Dave joined me and we headed upstream to an area close to an old , disused canal intersection where we'd caught pike several years before in Dave's 'tinny'- an aluminium boat. The fishing was slow but my boat partner managed to christen a new bit of 'cane' with a single figure fish whilst I had a double of 11lb 12oz so the area shows some promise.
I returned to the river the following day but succeeded in blanking completely so , it would appear, that we've lost track of the pike.....for the time being. 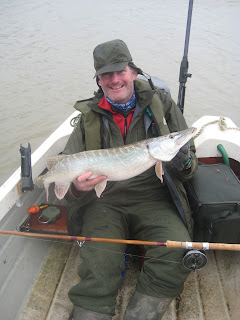 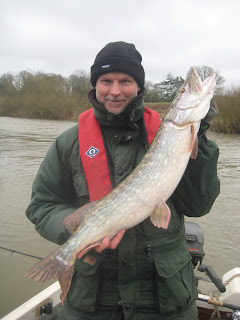 A week later and we were both to return for a trip that saw us searching twenty miles of river, for a bite. We started by heading much lower downstream  than we've ever ventured before to areas that we are certain contain fish, that have yet to show themselves. We do know of anglers who have succeeded in this somewhat 'hostile' environment and that's what stops us losing faith and keep trying. One day we will score down there and even a small pike will feel like an achievement. Success in fishing , isn't always measured on how many, and how big.
As the tide flooded we followed it back up river and literally within minutes of Dave dropping his dead bait in our swim of choice, it was taken by this very fine pike indeed of 20lb 4oz. A splendid end to hard day afloat. 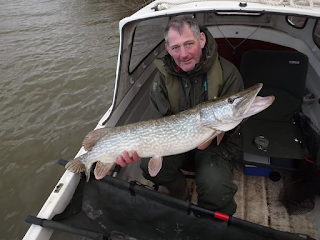