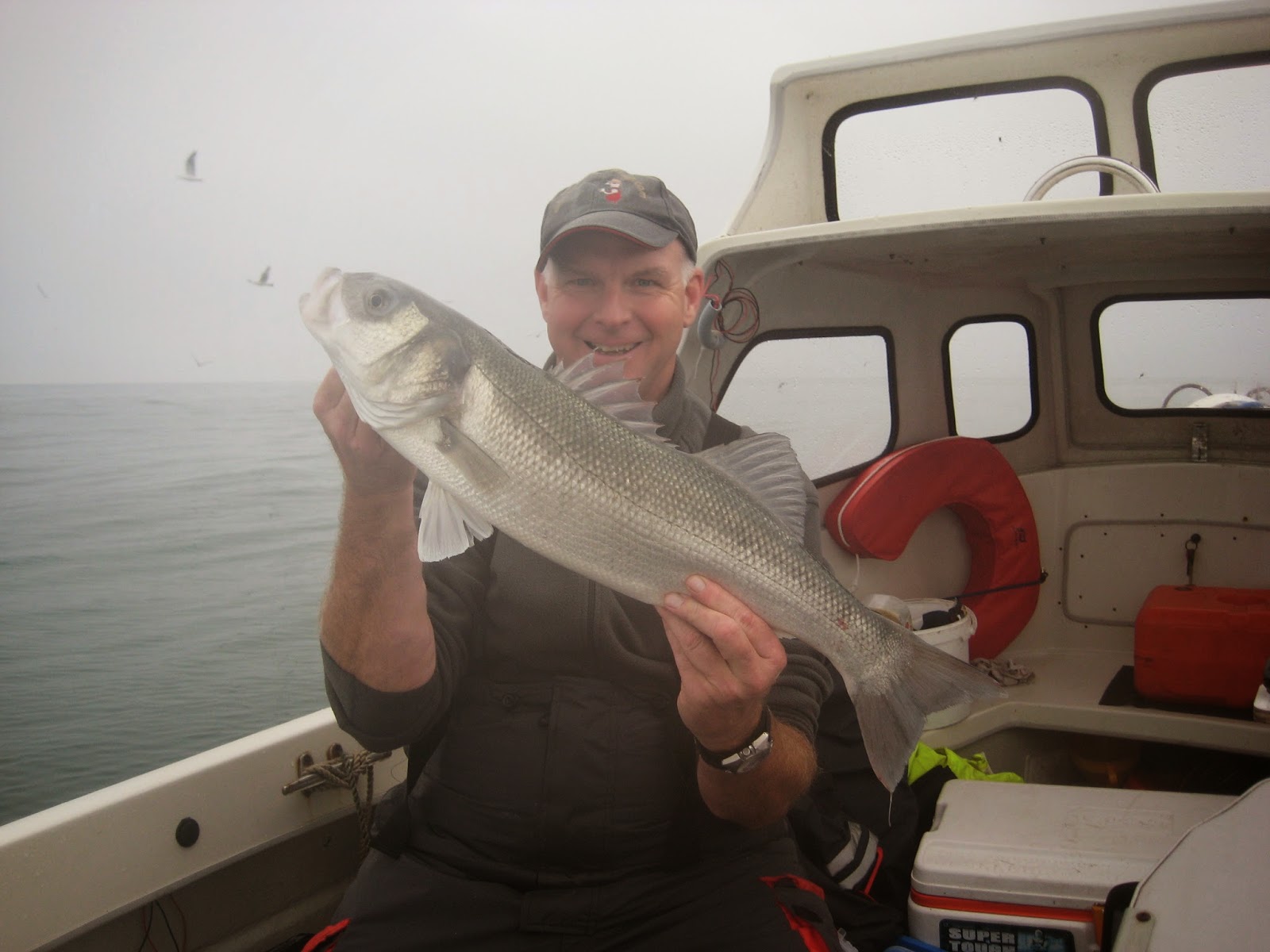 Brian is becoming a welcome regular on 'Jupiter' especially of late as he's had a bit of window trouble(one fell out!) with his trusty Orkney Fastliner 19  'Marruig'.

Having secured  a replacement from the factory (Orkney boats is just a ten minute journey from the marina) Brian, along with his capable assistant Alan, managed to refit the window thus rendering the boat in a seaworthy state once again.


Of course, the new window had to be thoroughly tested for integrity, and this would involve sea trials with a spot of fishing thrown in for good measure and I was pleased to be invited along for the ride.
Even if the fishing is slow, it's never a dull day with Brian as he's a born comedian who really should be on the stage.
Agreed tactics would be anchoring up on a ground mark hoping for an early cod although we'd both packed our lure kit for the trip (just in case).
Water clarity was the big unknown. From the shore you can never really tell what its  like 'out there' and, as we'd been experiencing some pretty rough weather lately, perceived opinion was that it would be too murky.
Some shore anglers would have you believe, quite mistakenly, that our local river, The Arun, has a devastating effect on water clarity when its in flood but the truth of it is that even on small tides the 'chocolate' coloured water rarely travels more than a mile or so offshore and usually, the demarcation line is easily seen.
Of course the only way of gauging the conditions is to get out there, and see for yourself.
We did drop the anchor and bait fish for a while, catching the inevitable dogfish in the process but, as we peered regularly over the gunwales discussing the condition of the water it became clear(sic) that we were both thinking along the same lines. In no time at all the anchor was 'upped' and we decided to hit the reef.
As we approached the chosen mark, thankfully with not another boat around for miles, it became apparent that our great allies, the birds, were active.....indeed they were going ballistic.
This event would save us a huge amount of time and, as we carefully skirted the flock to line up the first drift it became clear that quite a large bass shoal was in residence.
From my own findings , the chosen mark tends to fish better when the tide is running in a certain direction and well under way. In these conditions I think the bass tend to shoal up quite tight, and take up station to feed. Once found they can easily be seen on the sounder as a green mass with lots of 'squiggly' bits on the edges, and this was indeed the case today.
It was great to be able to show Brian what this phenomenon looks like on his sounder and I think , from memory, its the first time we've seen this occur when fishing together.
Almost immediately we were into fish as we drifted quietly over the shoal and rarely did our soft plastics reach the sea bed before being taken. On occasion the fish would rise up to the surface where they could be taken on a hastily switched 'top water' such as my favourite 'Patchinko', although these generally proved to be smaller fish in the 2lb range.
The fishing was at times frantic and I'm sure Brian will have a laugh with me when I say that , in all the excitement,his navigation skills between drifts was at times a little 'haphazard' . The birds helped us and.........You got us there in the end mate.
We ended up with a catch of about forty bass with a best fish of about 7lb before having to leave so I could, rather inconveniently, get to work for a night shift.

The following morning in very murky conditions and with time at a premium, I decided on a solo revisit with just a lure rod on board. Once again I had the mark completely to myself(not unusual at this location and nobody would be able to see me anyway) but, as the tide was just finishing its flood the bass also appeared to be absent. Note I say 'appeared'.

A couple of test drifts proved unfruitful so I decided to act on a hunch, use the time wisely, and check out a neighbouring mark (a new one for me) whist waiting for a more favourable tide state.
Its strange how we, as anglers tend to gravitate to the same spots time and time again and I'm just as guilty as the next man for doing this.
On this occasion, a little experimentation paid off as I managed to pick up four bass from the 'new' reef and thus add it to the ever growing list of  'clutter' on the chart plotter. I'd also gathered some valuable information about the geography of the sea bed and discovered that two features in particular can indeed produce fish even over slack tide.
Once the run off had started in earnest ,a return to the original location was in order and almost predictably there they were again in a nice tight formation on the sounder. They're rarely this easy to find.
No birds to help me navigate today but because I was the only boat working the mark and I ensured that each return leg was well clear of the shoal it remained firmly fixed in one place and I was able to extract a further eleven bass in the two to four pound class before having to ,once again, finish while the fish were still feeding to go back to work. 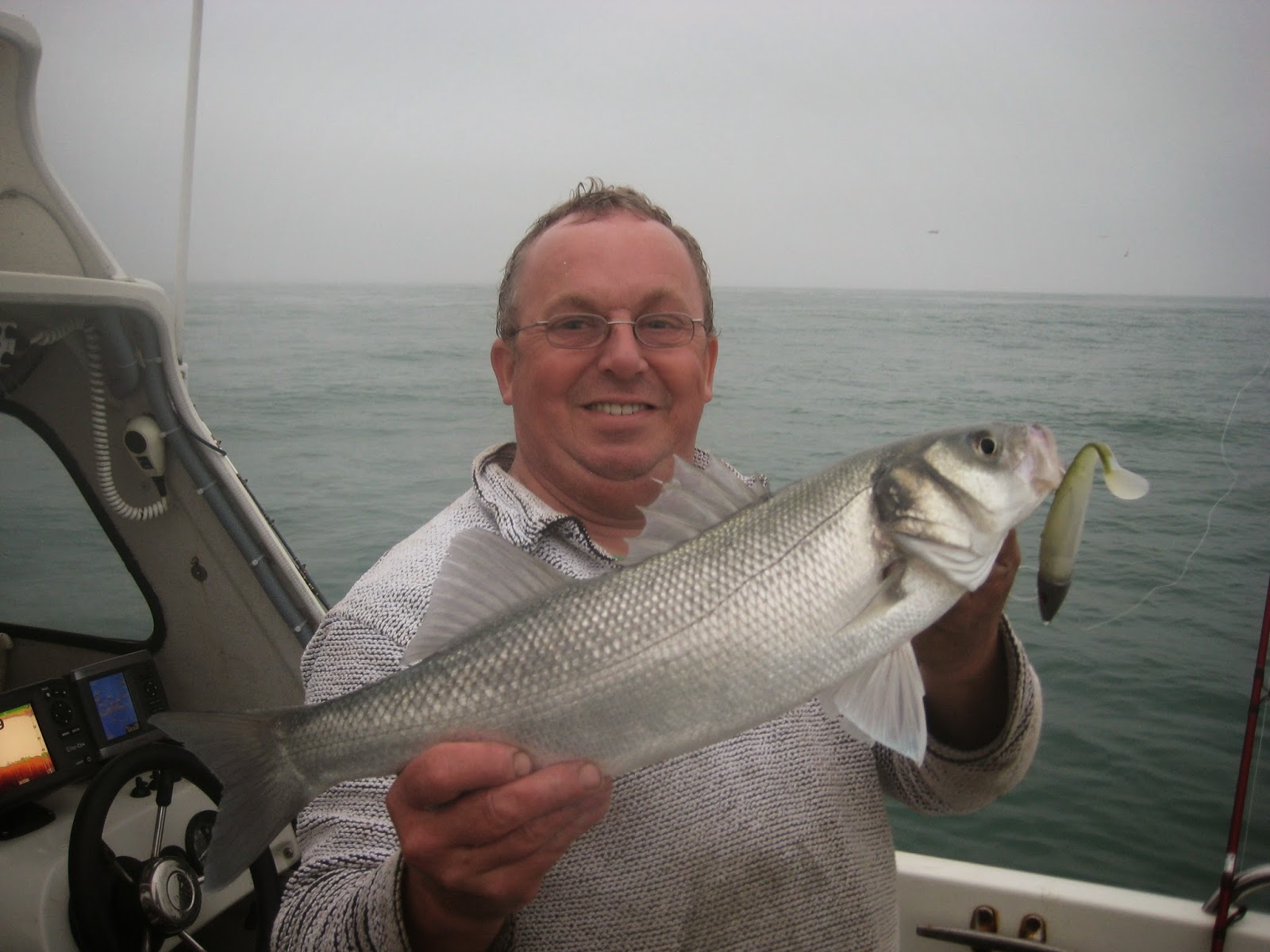