There was quite a heavy frost on the pontoons this morning when I arrived at the boat about 8-00a.m. The intention was to try again for bass and after a brief chat with Clive, who gave me a great tip to 'stick a bend in the lure', I headed out to #31 on a pretty calm sea.
The small tide meant that other boats were trying for different species(Clive was after plaice) and I had the mark to myself which didn't initially fill me with confidence. Beginning my drifts in the middle of the reef I soon had a small bass on board which was enough confirmation for me to stay and give it a good go. They weren't easy to find(more on the southern edge which appears to be more rocky) but I managed to catch four, plus a bonus mackerel and garfish, the best being pictured above, pushing five, complete with the newly white painted, and bent, Norden.
The standard lures don't last longer than one session before the paint drops off leaving them a dull grey colour and useless.I decided to dip my duff lures in white gloss, and spray some new lures with acrylic lacquer-both of which seem to make the lures more durable.
Interestingly the sounder regularly showed what I think, are the bait fish-in this case sprats. I'll have to confirm this with Neil or Alex which is why I've included the picture of the screen.
Towards the back end of the flood the fishing slowed considerably and I fancied a change of scene so moved the boat and anchored at #13.I'm really not sure of the bottom make up here but, for the second time I've lost anchorage using the grapnel so perhaps the ground is cleaner than I suspect and the mark is not quite so close to the reef edge as i had originally suspected. Eventually she held and i had instant action with nice bream, the Inevitable dogfish and this male undulate ray which filled my net completely. I'm sure it was the biggest undulate, dimensionally, that I've caught so far but, it was also very thin indeed(time of year perhaps?) and surprisingly it only weighed in at 12lb. Nevertheless, it was a fine fish to catch on the light outfit and ended another successful day afloat.
I was doubly pleased with the bass as Clive had mentioned that I'd done well to find them on such a short tide but it did take no end of patience to track them down, and even then, they were solitary fish. It looks as though they haven't really arrived yet on the reefs in any significant numbers so it will be interesting to see what happens on the next few trips out. 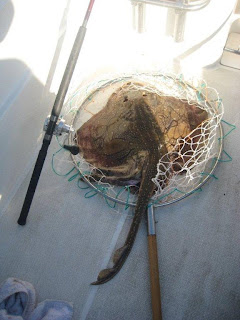 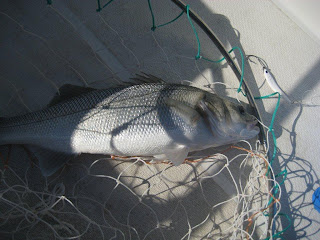