Dave's got a new motor for his boat so we decided to take it for a spin this afternoon, check out the launching at Pulborough, and explore a section of the river, that I'd recently stumbled across on a kayak expo, to assess its potential as a winter pike venue..Naturally, a couple of lure rods were stashed on board just in case.
This atmospheric stretch is Inaccessible from the bank, being completely surrounded by private land with ominous looking 'keep out' signs to prevent herberts like us from poking our noses in. It's also quite tricky to reach by boat, the approaches being narrow, and overgrown.However, after furiously paddling against  low tide 'rapids', and negotiating a jungle of vegetation, we managed reach our destination, the journey punctuated by several stops to clear the prop.Weed, at this time of year, is very much, an 'issue'.
I was Immensely pleased that Dave felt as enthusiastic about the place as I had been on discovering it. Whether It will produce the goods will remain to be seen but ,I sense that It might have something to offer us.
In the meantime we spent a couple of hours battling with the weed, chucking spinnerbaits and surface lures about. The only take coming from a 'thuggish'  perch of about five inches on a chocolate and orange 'coat hanger' roughly twice its size.............
I'm happy to report that the new motor performed well, although we did have a potential technical glitch when Dave's tow hitch jammed on his ball. Thankfully the problem was overcome with a touch of brute force, otherwise the Sussex roads may have been graced by a, permanently articulated, Ford Focus. 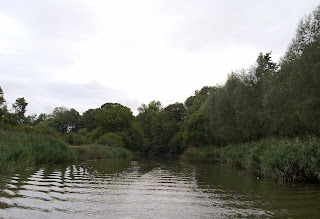 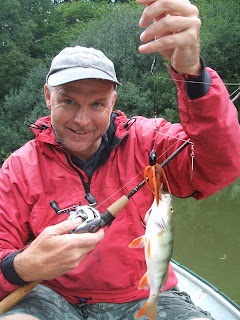 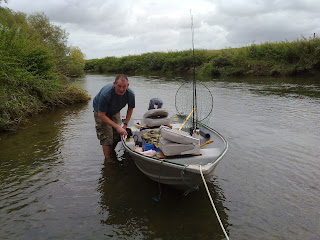