When the winds are blowing and the rivers are flooding something needs to be fished for and, In mine and Dave's case, It's perch.
We did have, until last year, a rather pleasant little lake on our club ticket which provided both of us with some modest specimens but unfortunately ownership changed and the fishing rights were lost.
Thankfully the club secured an alternative venue that has something of a reputation with big perch and Dave proved that they were still there by teasing out a monster last season.
Today was our first attempt of the winter season and bites were few and far between. Dave managed a very pretty fully scaled carp of around 5lb whilst I did actually hit our target specie with this plump 'stripey' of about a pound.
It's a start. 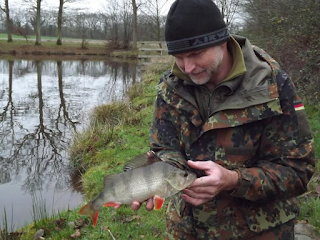