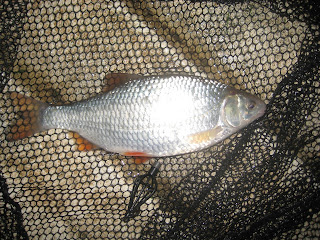 I had a couple of small jobs to carry out on the river boat this afternoon and managed to get them finished just as the light was fading so decided that a spot of fishing was in order.
With, a good bit of cloud cover, the tide ebbing nicely and wind dropping off , I opted to head a short distance downstream to an area that had produced some rather nice roach back in the summer to see if they were still about ,and to try a spot of night fishing- a classic time for winter roach.
Approaching the swim as quietly as possible by cutting the engine and letting the boat drift before dropping the mud weights , I managed to anchor in the perfect position on the first attempt (more by luck than judgement it has to be said) at the head of the swim and just a rod length out from the bank.
Method of choice was  flake on the hook, a size 10, with liquidised bread squeezed on a frame feeder- typical mullet tactics actually. A 'starlight' chemical light stick was attached to the quiver tip and baiting up was carried out with the use of a red headlight to minimise disturbance. Everything inside the boat was as carefully organised as possible to make life easier.
Fishing in about ten feet of water, all that was required was a gentle lob of a couple of rod lengths to get the bait in place directly down stream of the boat.
Very little happened until complete darkness and then a few tentative bites materialised which I assumed to be small fish pecking at the flake. Eventually I connected and a rather nice roach of about 12oz came to the net.
A few more 'pecks' followed until a very gentle bite connected with another nice fish-this time a pristine scale perfect roach of 1lb 1oz. Granted , hardly a specimen but,  a tidy fish nonetheless. If I could get one of double that weight from the river , I'd be a very happy man indeed though I suspect it might take some time,effort and a little luck.
Unfortunately I only had a couple of hours before having to leave for home as I was on 'dog' duty but, it was a pleasing start to my winter roach campaign and a successful first attempt at fishing from the boat in complete darkness.
The following day, flushed with our recent success, Dave and me attempted some more pike fishing , again afloat, but unfortunately suffered a 'biteless' day.
I don't think the big 5.8m tide helped, nor the fact that the river was carrying quite a bit of rainwater and was therefore relatively coloured. It was however, quite interesting at high tide to be able to clearly see over the top of the flood banks and into the neighbouring fields and wetlands for the first time, and to be able to easily step off the boat back at the mooring rather than carry out our more usual , and sometimes precarious 'Spiderman' impersonations scaling the pontoon ladder.
Posted by Unknown at 14:07