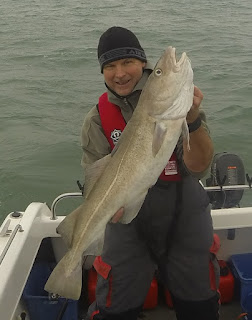 The winds forecasted for today were just light enough, though still double figure knots at times, to poke my nose out to sea for a spot of cod fishing.
A mere handful of other local boats had the same idea and it was extremely pleasing to see our charter fleet finally get out and earn some money-they've had a hard time of it of late.
After a bumpy ride out I settled on the 'half way' mark just as the flood tide was coming to an end and with these conditions, for convenience more than anything else, it was going to be a 'one mark' day.
I opted to fish whole baby cuttle on one rod, with a lug stuffed squid on the other -big baits to try and avoid the 'fodder' fish.
A couple of dogs, pin whiting and pout managed to hook themselves on the 6/0 pennels before the boat swung round with the ebb and into the breeze. Wind over tide made it quite 'lumpy' and some heavy swells were also pushing through but it was all very manageable.
A small conger of about 10lb came to the 'cuttle' rod and, seeing as I was also getting quite a bit of small stuff nipping at the baits I chose to switch the second rod to a live bait rig-a 1/0 hook directly below an 8/0 with just the small hook baited with a morsel of squid tipped lug.
The idea is that a small fish, whiting or pouting, hooks itself on the small hook and then prese3nts itself as a live bait.
In short,  it worked and, quite well.
A better fish hit the live bait rig and began to put up quite a fight in the increasing flow. Nearing the surface I could see that it was a conger well into double figures and just at that moment, the second rod bent over an almost leaped out of boat.
With a rod in each hand I was completely 'scuppered' but knowing that the first take was an eel, I opted to slacken the drag ,place that rod in a holder, and deal with the second take.
This turned out to be a very wise decision as what came up was a nice cod of 14lb-target hit.
No more cod showed but It would appear that I was sitting on a conger 'nest' because, three more eels showed up, all on the live bait rigs, one of them being a decent fish of about 35-40lb-excellent sport indeed.
One culprit even had the audacity to spit out the fat pout it had Intended to eat as it reached the surface. I doubt very much whether that eel had even been properly hooked.
Another that I'd brought on board for unhooking decided that it would go into reverse gear, and slither behind my fuel tanks in an attempt to hide-entertaining characters indeed.
Half a mile or so to the South of me Clive and Kim were also experiencing something of an 'eel fest' taking eleven conger in total along with a couple of cod.
We've experieced this situation with conger before, at this time of year, when it seems that they leave their lairs and hunt on open ground.
Listening to the radio it would appear that most boats managed to pick up a cod or two which was pleasing and some sizable fish to 20lb were taken on the 'skate marks' which is very encouraging indeed.
Marina buddy Tony was also fishing my chosen mark and he'd managed to score a trio of cod including a new P.B of 13plus pounds-well done that man.
All in all, an excellent session afloat, and great to be able to finally get out to sea again.
Posted by Unknown at 14:48