Driving rain and strong winds aren't exactly ideal conditions for fishing in a small boat but nevertheless, my roach baits  managed to induce two takes from small pike.
I would have liked to explore more swims but instead, only managed a couple of moves during the session,spending the majority of the time tucked up under the cuddy, which is extremely useful, with the bow of the boat nestled against the wind and firmly wedged into the bank side vegetation.
Despite the rain, the river remains in excellent condition with a healthy green tinge. I can only surmise that the ground is still dry enough to absorb the rain fall, rather than channel it into the river which, in winter conditions can become like a mucky drain.
One of my side line pastimes is messing about with old fishing reels and I've amassed a modest collection in recent years some of which get the occasional airing.
I've been servicing a 1950s Young's Gildex No.1 multiplier for Dave recently, and couldn't resist loading it with line and taking it along today for a few casts before handing it back to him. It cost £9 9 Shillings in 1959 when the average weekly wage was about £13 and even featured in 'Mr Crabtree'.
Considering its age, the direct drive reel (the handles revolve like mad things when you cast) works extremely well indeed and I'll admit to becoming quite attached to it.
The reel is extremely well engineered with quality components and is obviously built to last a long time but, and this is my usual gripe with 'old school' multipliers, Its right hand wind.......and they never made a left hand wind version. Why, seeing as most people are right handed , hold their rod and cast with  their right hand, and most fixed spool reels are left hand wind is one of the angling world's great mysteries. 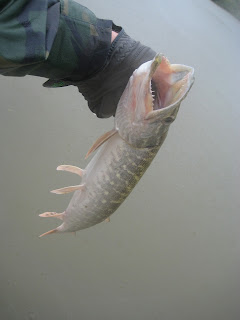 Diminutive 'jack' pike with a mouthful of needles. 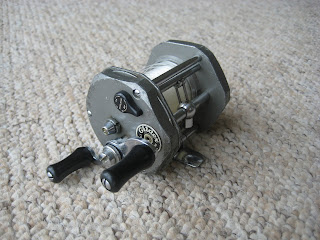