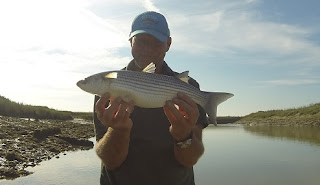 It probably wasn't the best day to choose mullet as a target with high air temperatures, and bright sunshine-conditions which I've never favoured when hunting this specie.
Talking of heat,the cooling system on the river boat outboard has been playing up of late. What should be a forceful 'spurt' from the 'tell tale' has gradually weakened to a pathetic trickle so the old motor had to come off the boat for a closer inspection.
Fortunately, after the roach trip of a few days ago the tide was at its highest point when I returned to the boat mooring so I was able to manhandle the outboard up the raking ladder , and on to dry land single handed. No easy task, it has to be said.
After some fettling at home, I considered it was ready to return to the boat so , chose high water again to precariously lower the outboard back in place using a piece of rope that is normally reserved for a life ring on the mooring.
Naturally, I tie good knots(ahem) but, I was relieved to see the lump of metal land safely on the deck without any damage.
Whist testing an outboard in a bucket of water  at home is fine, they really need to be subjected to a working load, and what better way to do this than to run ten miles downstream for a spot of mullet fishing. If  the engine failed, at least I had a set of oars on board.
Arriving at the first swim with the tide well into the ebb, it was clear there were several fish in residence and it didn't take very long at all to get them feeding on my bread mash, induce a take, and land the three pounder seen above. However, in true mullet fishing fashion, that was the end of it as far as the 'grey ghosts' were concerned.
The fish in the swim seemed to melt away after my capture possibly by the disturbance I'd caused . I carried on for a while but it became clear I would have to look elsewhere for them.
I did a lot of searching, even running as far downstream as Ford but, the mullet were nowhere to be found. A building breeze that funnelled between the river's flood banks didn't help as the ripple on the water made spotting fish increasingly difficult.
Apart from a dfropped fish which I suspect may have been a small thick lip,the only other action I experienced was from a rather nice roach of about twelve ounces, of all things, on the flood tide close to an area of  mud flats. I have caught coarse fish before this low down the river but I'm still surprised when they turn up out of the blue like this.
During the afternoon, the last remaining Vulcan bomber still flying continually circled above me giving me a stunning view of this fantastic aircraft although, little did I know of the tragic event unfolding just a few miles east at Shoreham.
I called a halt to proceedings In the mid afternoon heat and ran the boat back up to the mooring with no issues-thankfully, she's 'peeing' steadily now.
Posted by Unknown at 09:51