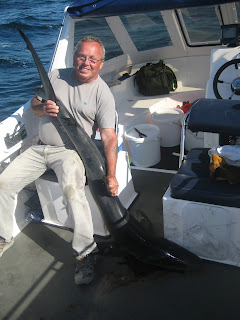 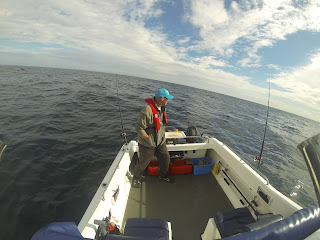 The loneliness of the solo sharker. 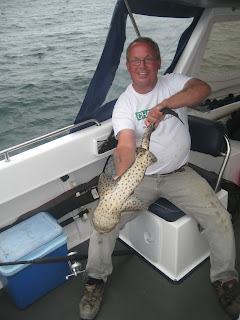 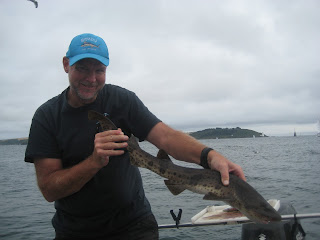 My first ever bull huss.
A three day trip to Falmouth once again, in search of some sport with blue shark.
I'd been given a tip from local charter skipper Andy Howell that the blues were starting to show up in better numbers of late so decided on a last minute run down to Cornwall with boat in tow.
Leaving home a 4-30 in the morning proved to be a good move and by the middle of the afternoon the boat was nicely settled on a pontoon mooring in Mylor yacht harbour ready for the next day's assault.
I'd never shark fished solo before but, with my crew Brian not being available until the following day I decided to 'bite the bullet', take advantage of the weather conditions, and go for it anyway despite feeling a certain amount of trepidation.
In the event, I needn't have worried in the slightest. By being extremely organised , having all the tools to hand and only fishing two shark lines , I was able to fish effectively and safely.
I had to wait a while for it to happen but, late in the afternoon a screaming ratchet signalled that the shark had finally picked up my chum trail and the result was a decent sized blue of perhaps close to the ton at the side of the boat.
Two more lesser shark were taken before I called it a day and returned to port having covered about five miles on the drift. The slight wind had assisted me somewhat by helping to spread out the chum trail and this was a bonus as the tides themselves were a bit on the small side. Unfortunately, this season's unsettled weather patterns have meant that 'beggars can't be choosers' when it comes to shark fishing. You've got to go when the weather allows and not be selective when it comes to the best tides.
The following day Brian joined me and I decided to head out to virtually the same area that I had used the previous day. The drift however, was completely different, taking us in completely the opposite direction and leaving us some 14 miles from port at the finish.
Again, we had to wait a long time for some action but, with blue shark fishing ,within reason, there is no such thing as a 'not happening' day. The longer the chum trail is allowed to do its work, the more chance that a shark will pick up the scent and find the baits.
Luckily Brian is a patient angler who just enjoys being out there so we waited, and waited, and eventually, of course, it paid off.
My mate was thrilled to get his first ever shark and I was pleased that the fish didn't tail wrap the trace., was cleanly hooked and therefore gave Brian  a decent 'scrap'. We decided that, as it was Brian's first, we would bring her on board to get a trophy shot which we managed to do successfully.
Shortly afterwards we experienced a dropped run on one of the baits but I sensed that it would return so left the bait in place and sure enough, we were given a second chance resulting in a second shark on what was otherwise quite a slow day.
By the third day the winds really had picked up. Andy was out sharking in his BIG charter boat and reported over the radio that it would have been far too uncomfortable for my Warrior, so we decided to hunt bull huss instead.
I'd never caught one before but Andy had furnished me with some likely numbers inside the shelter of the Fal estuary to try. With very little tide to speak of and a gusty wind it proved extremely difficult to keep the boat still enough for bottom fishing but this didn't seem to stop the huss from biting. We scored nine of the feisty blighters, Brian taking most of them, along with a handful of thornback rays making for a most enjoyable day's fishing.
We'd begun our session by feathering mackerel for bait and had found enough within a minute or two of fishing. Our plan was to end the day in a similar manner and secure a few for a decent evening meal but do you think they would 'play ball'. We did eventually find a few but at one point we though we might have to pay a visit to the local 'chippy' for our tea.
Unfortunately the strong winds were due to persist for the following day so we were unable to continue with the shark fishing and decided to recover the boat and return home-a journey which was made so much easier by travelling through the night rather than mingle with the daytime holiday traffic.