Following on from the success of our shark adventure to Cornwall, Wayne and me have now set our sights on local shark.It'll be a tall order but, we have been doing our research.
On my own patch east of the Selsey peninsula i've gathered several reports of thresher sightings and hook ups by Littlehampton skippers.Neil has had encounters and Steve Wells has also tangled with the specie. Unfortunately, I've not as yet found anyone in recent years who has successfully managed to bring one to the side of the boat.
Wayne has also picked up a good deal of reliable information about his side of Selsey and of course,the patch encompasses the Isle Of Wight which has a rich shark fishing heritage.Nowadays , there are less shark about generally but, we still feel its worth putting the time and effort into the task and, if we see a shark one day..............
I've recently heard of a Littlehampton crew that spent several days fishing a considerable distance South West of the island and scoring with a handful of porbeagles to 350lb interestingly, most caught in darkness. On the day we tried for a shark ourselves, a Langstone charter was reputed to have caught a 140lb 'porgie' quite by accident from 'our' tope grounds so, it would appear that, we do indeed, have a chance.
Quite how we would handle anthing bigger than my big Falmouth blue inside our tiny boats is anybody's guess , so I suspect that future shark captures may involve 'touching trace' and releasing at the side .
Wayne has a very tidy 17ft Wilson Flyer 'Taryn' (named after his daughter) which he keeps at the Eastney Cruisers Association- a very impressive set up with some superb facilities for small boat users and at a fraction of the cost of my own boating expenses. We met up for an early morning start running 'Taryn' down the excellent club slipway into the Eastney/Hayling channel and set off in near perfect sea conditions to an area some 20 miles off recommended to Wayne by commercial fisherman Ted Legge.
With the chum 'down' the mackerel soon appeared so , after gathering our hook bait supply , we set our shark lines at the usual prescribed distances,and began our drift. Initially, we were taken eastwards on the flood then inscribed a huge clockwise arc on the plotter taking us close on 25 miles off for the ebb tide which we continued to follow until the second slack and the end of the fishing.
Unfortunately just one slice of action to report when Wayne's bait was 'nibbled' for about a mile before a steady run ensued but, we failed to connect.Speaking to Graeme Pullen, its possible that it may have been a tentative thresher teasing us but,of course, we'll never know.
No shark, granted but, a highly enjoyable start to our campaign with another piece of the jig saw in place.We will return. 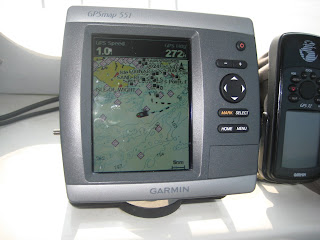 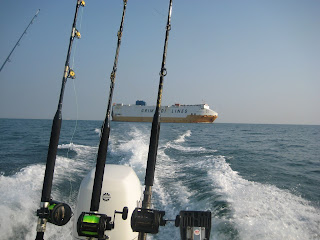 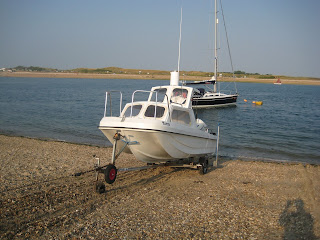 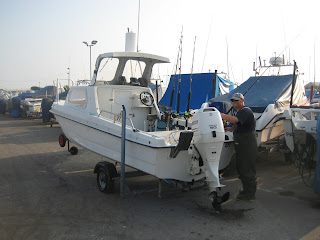