Mullet lie at the roots of my fishing. Well actually, that's not strictly true . I fished very keenly as a teenager ,mostly for coarse fish, but it was mullet fishing that kicked off my 'renaissance' period when I rediscovered fishing at the turn of the century having 'let it go' for over twenty years.
What on earth did I do with my time, I ask myself.
Mullet fishing will, I suspect, always be there. It's simple, eminently affordable and endlessly challenging and I have a deep affection for it. If , for whatever reason, I have to one day give up the boat, or can't get up the river for a pike, I 'm pretty sure I will be able to go mulleting.
Fish have been showing under my boat in the marina for some time although, I assume due to low spring temperatures, they were late turning up this year. For various reasons, I won't target these marina mullet at the present time, even though they seem to be of a very good size, preferring instead the peace and quiet of the open river.
Generally, when fishing the main river I prefer to wait for low water. It makes a lot of sense to me that the huge reduction in water volume at this state of tide increases chances of locating them.
Picking one of my favourite stretches, they were quite easy to spot, and I tried my usual trick of trotting a float downstream to any likely candidates.
It didn't take long for a bit of interest to be shown but the first proper bite was missed completely. For some inexplicable reason, I watched the float disappear completely and failed to react at all. Senior moment.???
A few minutes passed and when the bite registered, on this occasion, I did the right thing and a scrappy two pounder was soon beached-my first of the season.The feisty little fellah kept fighting on the bank and needed pinning down for a pic.
Usually, the flow starts to tail off a couple of hours after low tide at the river entrance. On a big tide the river rises, but still flows towards the sea-a curious phenomenon. Today, being a small tide the 'slack water' period was prolonged and, although the mullet require a more sensitive approach at this time with the float shotted down to reduce its buoyancy, they do seem to feed well. I can't always guarantee a fish, but it's on the cards.
The river is so still, it's akin to fishing a lake.
A couple of nibbles ensued followed by a positive take and ,'bang' another fish was 'on'.
A fat three pounder this time in sparkling condition-a welcome sight.
I fished on hoping for the hat-trick but once the tide began its flood the fish just switched off the feed which is consistent with what I've always found at this spot.
Good fun. 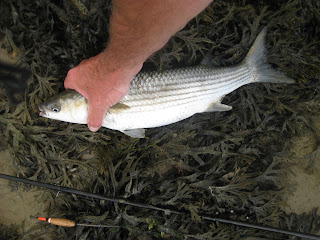