Armed with the valuable knowledge I'd gained from my recent outing aboard 'Spirit Of Arun', on the charity tope trip of a couple of weeks ago,I decided today, to try and get my first of the specie on board Jupiter.
Tide was 4.7m and the wind speeds during the morning were looking perfect for the long haul down to the mark.
Unfortunately, my intended crew-Pete Cook, had to cancel yesterday, the hunt was on last night to secure a last minute replacement.I needed someone with experience and, as Dave Nevatt hadn't previously been out in my Warrior , and it was a week day, i knew he'd be up for it.He actually agreed to come along whilst sailing home from a boat trip out of Hove last night-the man loves his fishing.
We left port at just after 0730 making a slight detour en route to an area adjacent some local reefs to try a pick up some fresh mackerel which have been a little difficult to locate lately.
It took a couple of moves to find them,but we soon had ten or so in the cool box before speeding off at twenty plus knots to the mark.
Upon arriving, I was a little concerned about anchoring the boat securely in such deep water.The chosen gully , at 100ft, was somewhat deeper than I'd previously experienced ,and although i do carry an additional anchor warp to join to the main if required,I did wonder if the 5 kilo bruce would be enough.
I needn't have worried. Keeping a close eye on the plotter's trail line function, the anchor dragged for a few yards then dug in deep, holding us rock steady in the considerable flow,  and positioned centrally in a wide gully.
Half mackerel baits(either end) on 8/0- circles attached to 5ft long 250lb mono traces  on a standard running leger rig were employed, and within seconds of my ten ounces bumping the sea bed, the rod bent over and the ratchet on the Avet screamed to signal an immediate take.We hadn't even set Dave's gear up.
I gave  the tope plenty of time to run freely with no resistance before gently tightening up-essential to prevent the fish dropping the bait.A brilliant fight ensued but, once tired the tope wallowed on the surface long enough for me to slacken the lever drag, hand the rod over to my crew,don welding gloves, get a firm grip on the tope's tail and dorsal , and haul her on board.
Remembering Spirit skipper Neil's proceedure for dealing with these toothy critters, I straddled the beast pinning her securely to Jupiter's deck, lifted her snout with one hand whilst swiftly nicking out the circle from the corner of her mouth with the other hand successfully managing to retain all of my digits in the process.
A quick measure and wrestle with her for the camera and she was safely sent back down into the depths none the worse for her experience out into the 'other world' -job done.A cracking first tope for the boat at around 40lb. 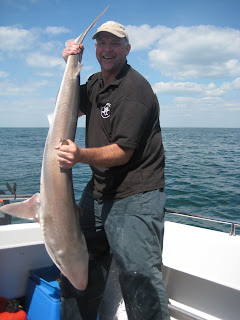 From then on, it was 'game on'. Virtually a fish a drop and, on a couple of occasions both of us hooking up at once in what was probably the most hectic fishing i've seen on my own boat.A couple more were brought inside for weighing and photography but my pike weigh sling proved to be totally inadequate, the  weighed fish however, which at 25lb was the smallest, gave us a good reference to work from when estimating sizes, the majority being successfully 'T' barred at the side of the boat.
In total we 'touched trace' on 25 fish with three over the 40lb mark, and split, numbers wise, almost exactly between us. The skipper naturally getting the 13.There were also several missed runs and dropped baits but generally , if left alone, the baits were soon retaken .
There was evidently a snag of some kind near us,because several sets of end gear were consigned to 'Davy Jones' locker' and indeed, at one point, i feared that we might run out of traces and had to resort to knotting a new circle to the heavy mono when i broke a hook clean in two with the long nose pliers-not easy.
Despite allowing the tope to run,, virtually all the fish were neatly lip hooked -the circles proving their worth.
The fresh bait soon ran out and we resorted to the back up mackerel, acquired and quickly 'iced' on the last trip out.Contrary to perceived wisdom, they didn't care a jot, and continued to feed voraciously on the frozen stuff.Perhaps today they were just 'up for it'.
As the tide slackened off completely and began to flood, the bites did slow down a little and by then a brisk south-easterly had picked up, so we decided to call it a day and slowly make our way back to port with the tide, but against the wind.........bumpy-yes, uncomfotable-no. Reducing speed down to 13-14kts we still made good headway without too much slamming.The boat handled it brilliantly yet still sipped on the fuel. By the time we'd returned to the river entrance we'd only just 'done' the first tank.Roughly 30 nautical miles on 24litres of fuel is excellent economy.
Despite suffering throughout the day with an aching back,leading to the occasional 'lie down' on Jupiter's deck, Dave had thoroughly enjoyed his day out and proved to be excellent crew-his seasons of boat angling experience quite evident. It was actually quite difficult to get him to agree to go home- i seem to remember the same situation the last time we ventured out on a boat together after bream.
A truly brilliant day's fishing for a spectacular specie. 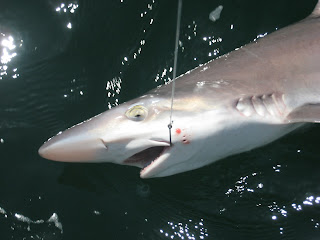 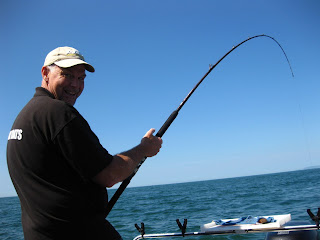 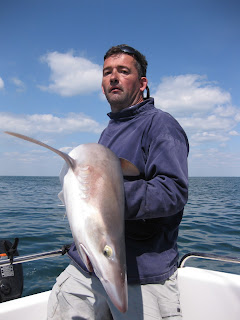 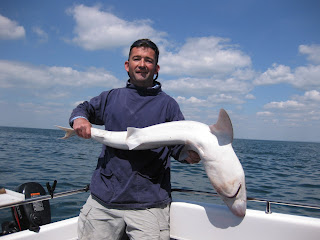