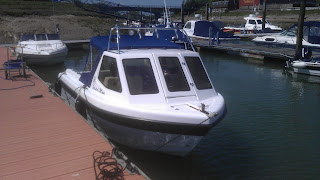 Jupiter' to my mate Rusty today, who is seriously thinking of going down the Warrior route-'sensible man' I say.
This month has been a pretty good month for me fishing wise and , looking at the sea state from my bedroom window this morning, it would have been criminal not to squeeze just one more trip in before June dawned.
Russ had texted me with a request for a run out in the Warrior to check out how she performed and , like any confirmed petrol head, I cannot resist a bit of blatant 'showing off', so after a quick phone call , we were crossing the river bar within the hour, with barely inches to spare beneath Jupiter's hull.
The Kingmere reef is our 'traditional' bream mark and it was here we headed mostly because, I'd yet to try it for myself this season.
The flat sea really meant I could stretch the boat's legs, and show Russ what she was capable of and, within seconds of leaving the harbour she was skimming the surface at close to 30kts- I was even quietly impressed (frightened) myself. Actually, she feels rock steady at speed.
A few bream to two pound plus co-operated on the reef, along with pollack and pout before we decided to try for some bass on #6 despite the tide being both flowing in the wrong direction (flood) and being pretty meagre in size anyway. I was aware that chances were slim but just had to prove it to myself. Russ picked up a colourful ballan wrasse before we abandoned the reef and headed out in search of mackerel for bait.
Beyond Black Ledge the water took on a murky appearance which I'm assuming is the much talked about 'May Bloom'. I'm not entirely sure of this but it certainly didn't look conducive to good mackerelling-apparently they dislike it in their gills, so we relocated to clearer waters inshore at one of 'Phil's skate marks' and bingo.....twenty odd 'mackies' were feathered up and in the bait box.A few dogs finished us off and by then we'd completely lost the tide and it was time to call it a day.
All this whizzing about gave Russ a fair idea of what 'Jupiter' is capable of and he went away impressed and with a lot to think about.
Interestingly, the 'big three' as I've now christened Littlehampton's regular charter fleet, are mixing it up on the fishing front.I was unaware that our plaice fishing was available virtually throughout the year until a conversation with Dave Nevatt revealed that over in Shoreham they fish for them year round.
It's just that sometimes other species are available to L.A crews and they are fished for in preference. With this year's spring being about a month late the guys have continued to go for plaice because the bream fishing has only really just got off the ground in the past few days.
I'm unaware of the situation regarding hound fishing and I've yet to try for them myself but, pups are showing on our local beach marks so I'll bet their parents are out there in some numbers and the situation is no doubt similar on the ray front.
I suppose the charter boys have to supply what their customers want and, for visiting day anglers, that probably means our bream fishing and when the time is right, bass. All very interesting stuff.
Anybody want to shed any more light on this? Be good to hear from you.
Posted by Unknown at 07:24