I should have taken the plunge and gone out in the boat today.I deliberated on the way past the marina this morning, and I had to visit the boat again this evening . Clive had just come in reporting that the weather had been reasonable, and that he 'hadn't had a bad day' which means he probably crucified the bass. Naturally I didn't like to ask any more about the fishing , but it was useful to ask him about the winds. It had been blowing double figures(mph) but from the south and comfortable.Noted for the future.
Instead I went piking to the lower P #1 stretch for a few hours dropping a small pike on a big rudd, and finally nailing a big tail walking single on a small rudd at the top of the stretch.
On closer investigation of the picture of this pike, it would seem that once again , it may be a recapture.I can't be sure because the photographs are of opposing flanks but, if the fins are opaque and the markings the same on both sides, then this is the same 'tail walker' that I caught,from the same spot,on 30/10. Bugger!
The flooding tide brought huge rafts of debris  ending the session slightly prematurely, just before dusk. Meanwhile, down by the red bridge at HW, Andy scored a mullet .This is the latest Arun mullet that I've heard of due in no small part to the exceptionally mild November we're experiencing.
Well done that man. 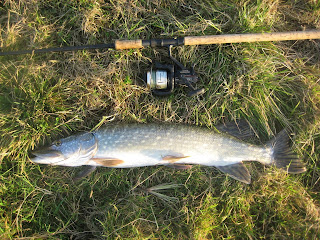 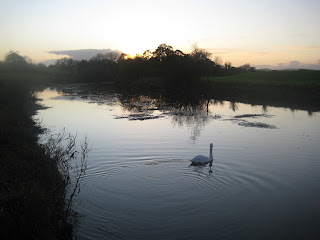