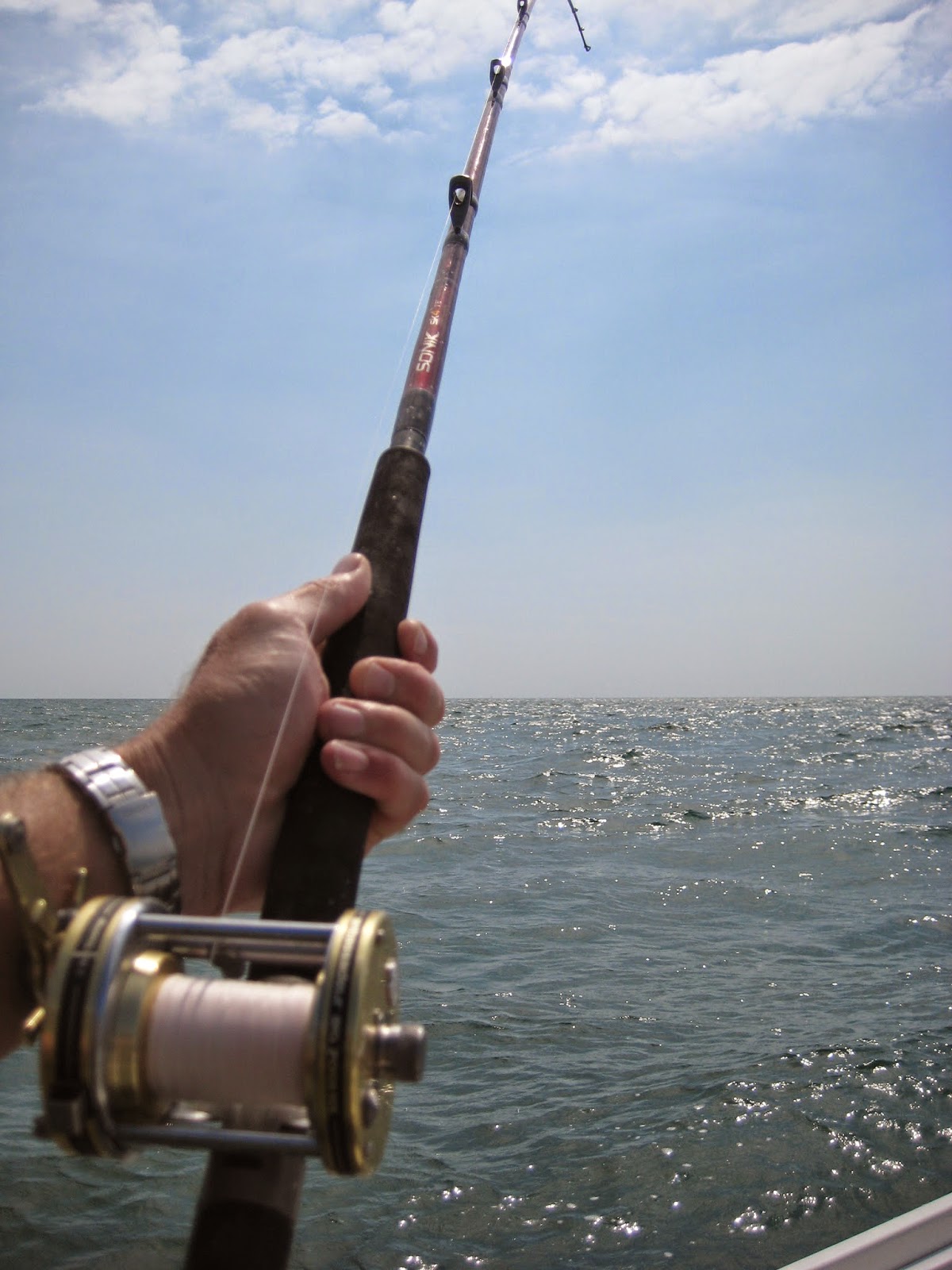 Every now and again in fishing, something really special turns up.
Roger is another very friendly and helpful boat owner at the marina and it was his recommendation that I try an area which shall be known as 'Half Way' mark. Interestingly, he sold it as a hound mark but did mention that if mackerel were available, a tope or two might happen along.
No numbers were provided and it was just a case of checking the chart out at home, and getting a rough idea of where to put the boat on the plotter.
I got the fresh mackerel I needed on the way out, but it took three stops and 50ft of water to find them. Everybody seems to be in the same boat regarding catching mackerel at the moment as they're proving tricky to locate.
Tide was still pretty slack when I arrived at the mark and the sounder showed nothing of any interest just 65ft of depth and a flat, featureless sea bed so I randomly dropped the pin. Mackerel flapper barbless10/0 circle to 200lb mono trace on the heavy, and whole squid 2/0 on the light and within minutes of getting myself sorted and before I'd even had time for a coffee, off went the ratchet on the mackerel and up came a double figure tope. Good start.
Next drop the mackerel kicked off again and up came another pack tope and, just as I was unhooking the fish(in the boat this time), the squid bait tore off way up tide causing mayhem. 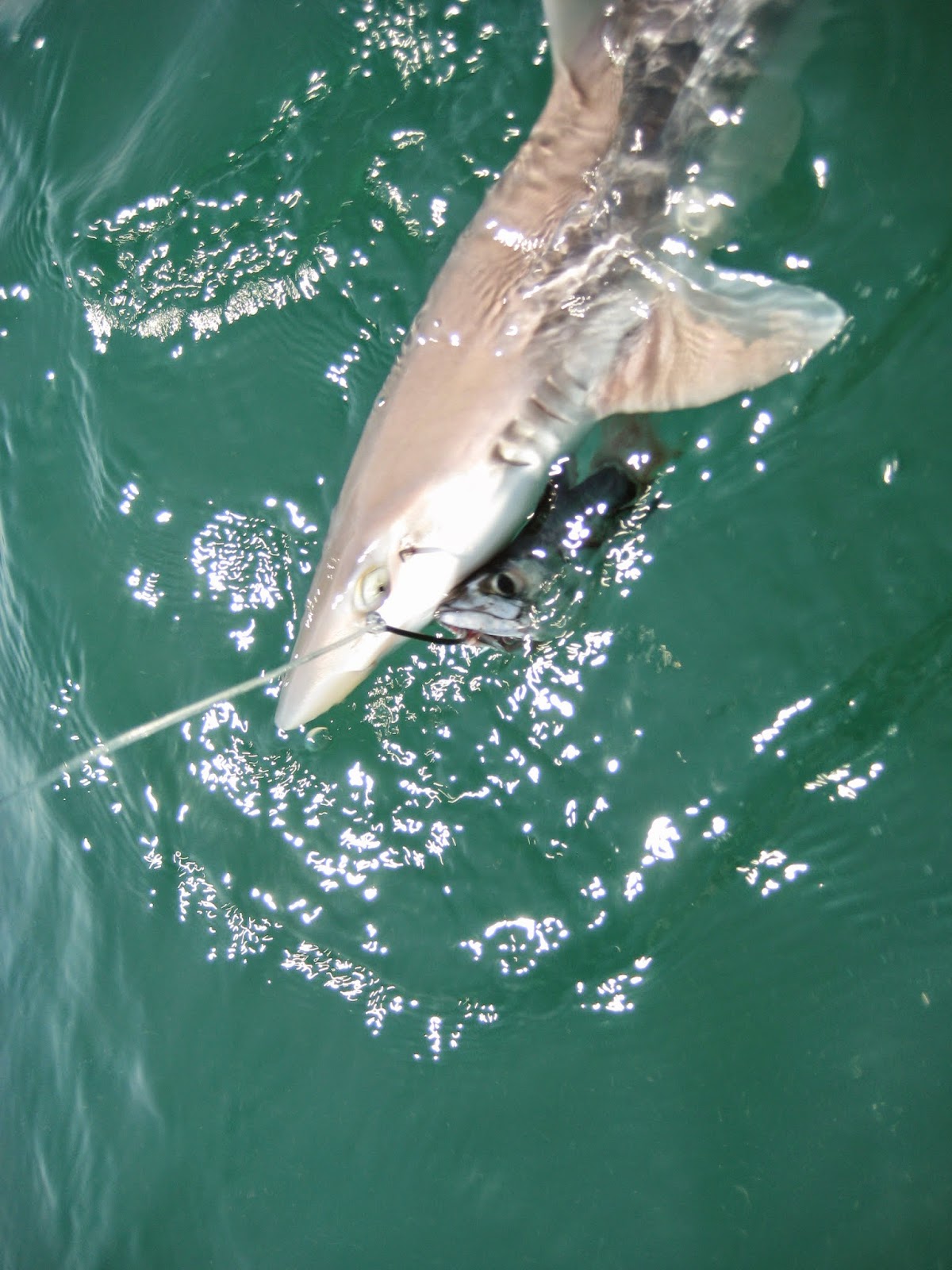 Once I'd sorted the third tope out I binned the second rod and stuck to the light outfit but with the mackerel rig. Three more tope came up , but with the tide increasing in strength, more lead was needed and eventually it took 10oz of lead to hold bottom and a switch to the heavy outfit. One missed take saw fit to chase the retrieved mackerel all the way up to the boat before peeling off at the last moment. I wonder if these fish can be taken on lures
Things quietened down a bit so, I occupied myself with a bit of much needed tackle tidying , general boat sorting, and relaxing enjoying the sun and just 'being out there'. There was plenty to watch however, as a procession of yachts sailed past, and an inconsiderate pillock in a dive boat ploughed right over my baits. Why do they do that!
Eventually the ratchet on the 7001 screamed into action and I tightened up, this time, to something a bit special which kept on running south even under quite heavy drag pressure. An exiting 20 minute fight ensued hampered no-end by the speed of the tide. A sailing yacht came close to get a better look at proceedings, gesturing with a questioning arm stretch to which, at that time, I had no reply as I'd not yet seen the fish. 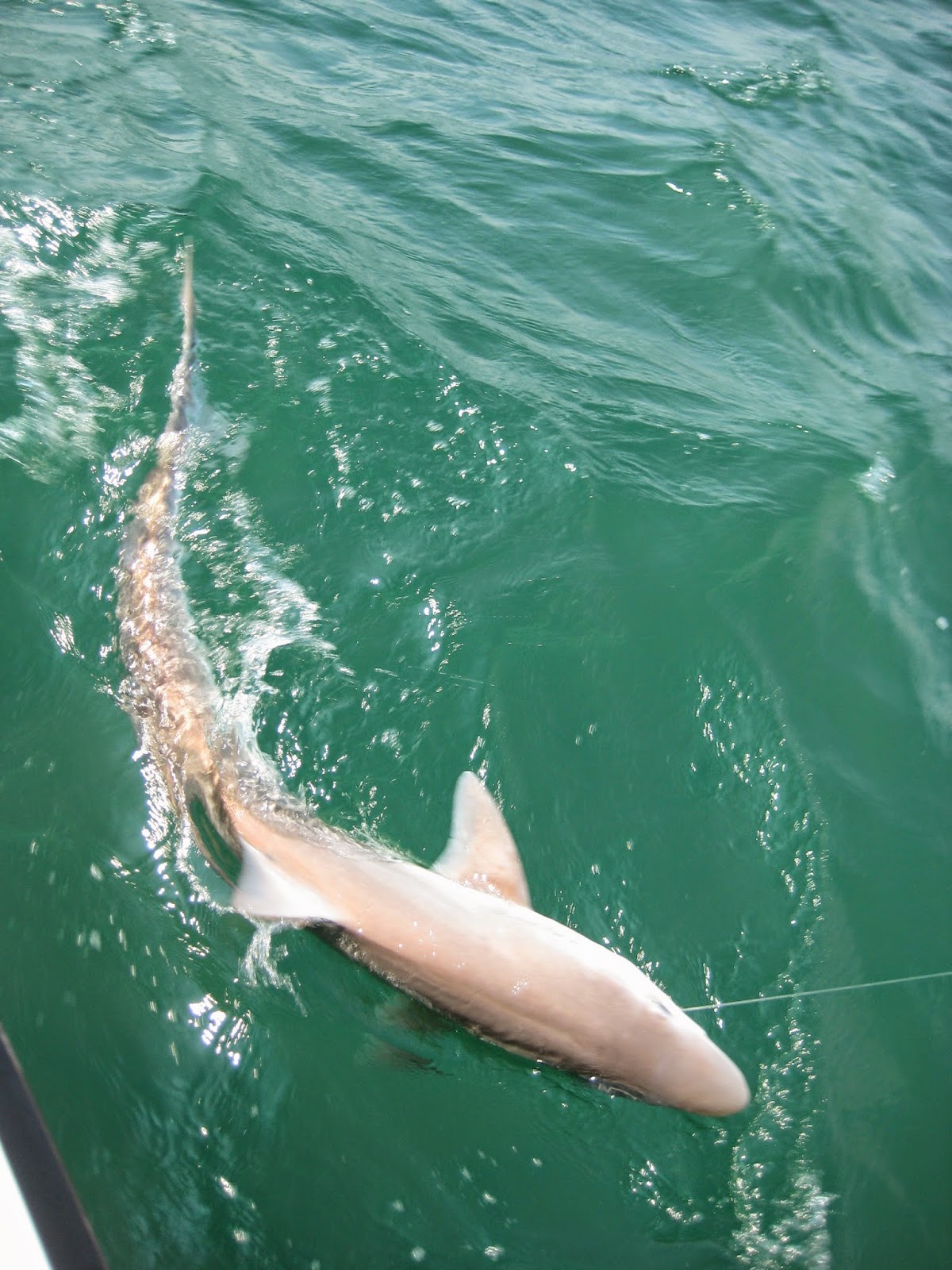 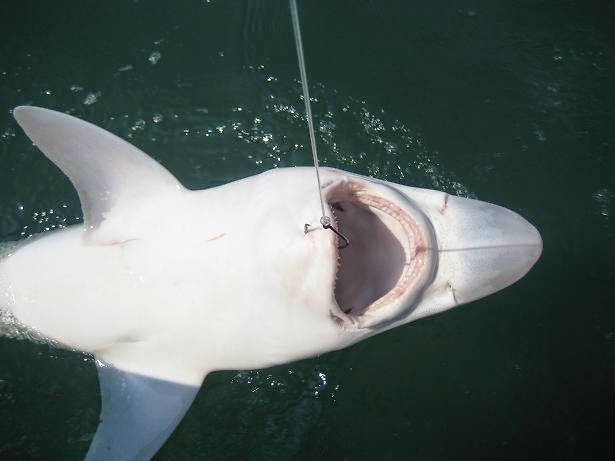 Thank goodness I only had one rod out as the tope took me all over the shop before I managed  finally to steer her alongside, get a rough measurement, and take a couple of one handed snaps.
Stupidly I hadn't previously got my gloves ready , but the trace is thick soft stuff so grabbing it with one hand, slackening off the reel drag in case the inevitable happened, I managed to cleanly T-bar the fish free in one swift movement and watch her disappear into the depths. Classic fishing moment-my first 'proper' tope to the boat and, at 150cm length ,snout to fork ,a fish of about 35lb.
To give some idea of the size of her mouth, that circle hook has a gape of about 4cm.
Another couple of pack fish came up later bringing the total to nine for the trip and no other species showing up at all.
Every fish bar one, was unhooked at the side of the boat with the big T-bar and this is how I'm going to continue to deal with these tope for the sake of their health, and mine. Of course it would be nice to accurately weigh the big ones but, It's not that important to me, and a rough idea of their length will suffice.
The circle hooks continue to work well when I remember not to strike and instead, gently tighten up. I did miss a couple of takes but I suspect that they were pack fish mouthing the bait as they didn't develop into proper runs.