Myself and Drew had already arranged this one before I'd caught yesterday's bass and It was hardly surprising that we had no intention of changing our plan.
Once again the weather was fine and sunny, although today there was even less of a breeze, and the water conditions were still gin clear.
I'd managed to finish my work by 12-30 and indeed was just returning to the truck when I got P.P's call. He was already fishing,  had taken a six pounder from above the prison bend, and was lucky enough to nab a passing dog walker(also keen angler) to take the shot.I was chuffed to bits for my mate, but a little disappointed that I'd not been there to see the fish and take the picture myself .It's not often I get a chance to see bass of this nature and they are truly a  sight for sore eyes.
Within half an hour I'd arrived at the prison bend myself and elected to gradually work my way back downstream with a blue and silver version of yesterday's killer lure-a 6" manns shad.
Probably ten yards or so upstream of the scene of the previous day's action, came the take.Another strong fight ensued but more spectacular was the sight of six or so similarly sized bass following my own hooked fish into the shallows in the bright sunlight. This incredible image remains in my minds eye as I'm writing-stunning.Once again i had to side step gingerly down the flood bank(tide had ebbed considerably) to net the fish,but being an old hand at the game by now, i had no problems flipping the net and actually landed the fish without coating it in sticky mud.
Another lovely bass, this time at 4-13 (23inches)- I was one happy bunny and once again Andy did the honours with the camera.
I had one more definite 'bump' shortly afterwards which pulled the shad body down the hook shank by the tail,but despite covering quite a bit of ground heading towards the sewer outlet, that was the only bass action for the two of us and we decided to head back.
Why did I not do more lure bassing this year-I love it.
On the way back  to the truck we spotted a few mullet, obviously down in numbers , but still enough to have a go at.I had packed the mullet kit that morning and as we were five minutes away from Tesco , which might possibly have some bread for sale,I decided to swap the baitcaster and multiplier, for a float rod and centrepin, get it sorted, and try for a mullet.
Starting point was the top of the west bank straight. I did the fishing. P.P(who didn't bring his mullet kit) did the recon work perched high up on the flood bank hidden in the bushes, offering tips and advice on where the fish were,how not to spook them in the gin clear water(difficult), and when to hit the bites.That's called teamwork.
The ebb was quite strong so a fair bit of mash went in, and it didn't take long for the fish to switch on to the bread with lots of surface activity showing.
'They're right by that old shopping trolley mate' P.P reported as I glimpsed at said trolley, and proceeded to miss the first bite.Ouch.
Couple of trots later , the float buried, and I didn't make the same mistake.I'll admit that I bullied this fish in, trying to keep the rod low in a vain attempt to keep the fish under water and preserve the swim, but unfortunately  I  beached it  a bit too close to the feed area, and take zone.Lovely mullet at 4-08 and distinguished by only having the use of one eye.
Now it was Drew's turn and being the unselfish sort of bloke that I am and because my man had only brought along his bassing kit, I lent him my mullet gear, and took over the role of 'groundbaiter'.
The swim had indeed 'died', so we moved upstream, and found a couple of likely targets flashing on the sewerage farm straight.It took about half an hour before Andy had his chance,  hit a steady bite, and complete the double shot for both of us with this mullet of 2-04.
Four hours fishing, including all the bank walking and shopping, and one of the most enjoyable and memorable sessions of the year.Great fun to mix methods and species.
Thankfully, after four straight days of fishing, I'm going on shift at the Fire Station for the next few days for a well earned rest. 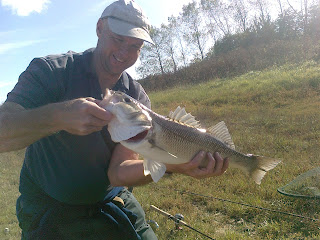 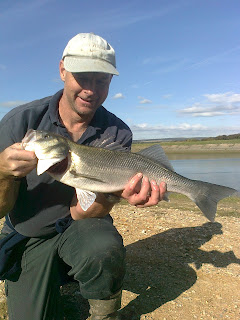 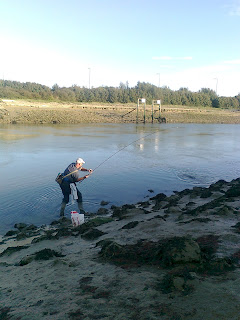 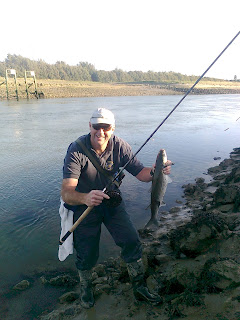 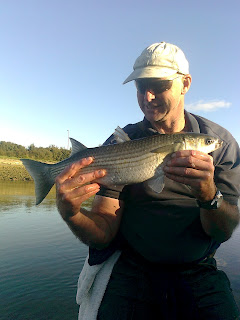 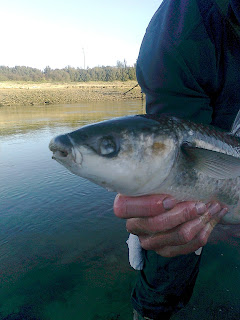 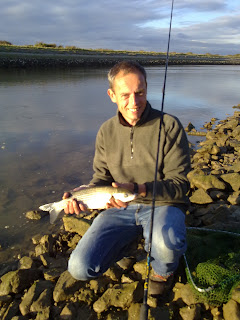 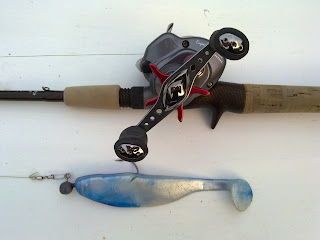 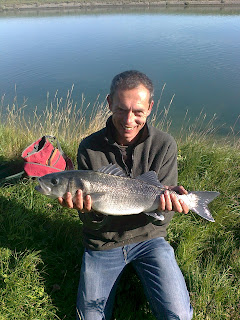